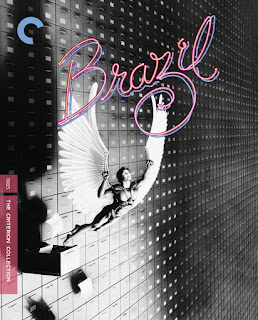 Author's Note: This review is for both the director-approved 142 minute version and the 94 minute "Love Conquers All" version.

Brazil, like many Terry Gilliam productions, faced many obstacles on its way to the public. Curiously, some of those struggles continued after filming concluded, with two rival versions fighting for dominance. Brazil, like Orson Welles' Touch of Evil, should be instructive on how studio interference can get in the way of true creativity. While probably not for everyone, Brazil is a sharp satire on the soul-crushing nature of bureaucracy and the tyranny of an unimaginative world.

Ministry of Information bureaucrat Sam Lowry (Jonathan Pryce) is not exactly content with his life but he doesn't want change either. His only escape from the drudgery of his life and work is his dream life, where he sees himself as a winged fighter rescuing a beautiful damsel in distress. Sam, however, finds himself drawn into a most unfortunate set of circumstances.

The Ministry of Information's Information Retrieval Department, owning to a bizarre clerical error, has taken one Archibald Buttle, humble shoemaker, and not Archibald "Harry" Tuttle (Robert De Niro), renegade central heating repairman and suspected terrorist. This unfortunate mix-up is a deeply troubling one to Sam's incompetent boss Mr. Kurtzmann (Ian Holm), forever worrying he'll get the blame. Sam offers to take the extremely rare refund owed to Mrs. Buttle for the charges Mr. Buttle paid for the information retrieval he underwent. Having no information to actually retrieve, Mr. Buttle ended up dead.

When Sam takes the check to Mrs. Buttle, it is here that he spots the literal girl of his dreams. It is Jill Layton (Kim Greist), Mrs. Buttle's upstairs neighbor who has been fighting the inept bureaucracy to get the Buttles justice. Jill looks exactly like his dream girl, so he begins desperately to find out more about her. The only way to do this is by accepting a promotion to Information Retrieval his vain mother Ida (Katherine Helmond) has arranged. It'll mean working at something Sam doesn't like, but it sends him on a wild chase that brings him into both conflict and conformity to terrorists and the totalitarian regime alike. Ultimately, his fate is in the hands of his frenemy, master Information Retrieval specialist Jack Lint (Michael Palin). 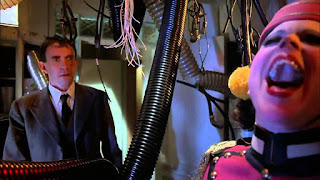 The difficulty in reviewing Brazil is that in essence one is reviewing two distinct films. The "director's cut" is over half an hour longer than what is known as the "Love Conquers All" version. It's important to as briefly as possible go over why there are two versions.

Director Terry Gilliam had his version cut by the studio distributing Brazil in the United States (Universal) due to concerns over both the film's commercial ability and Gilliam's downbeat ending. As a result, the Universal version ends on a more upbeat note, hence "Love Conquers All".

By shifting, changing and cutting things the studio ended up making Brazil more confusing rather than less. It's interesting that Universal did the same thing to the aforementioned Touch of Evil twenty-seven years early ending with the exact same result of making their cut more jumbled and almost incomprehensible. That however, is a discussion for another day. 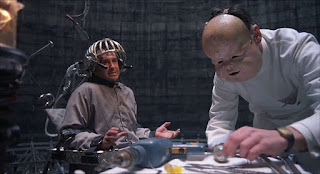 The "Love Conquers All" version does end with a more upbeat, hopeful note, but it doesn't quite ring true. In Universal's defense they did not do a terrible job, as one can see flashes of what the Gilliam-approved version had. However, a lot of it felt rushed bordering on chaotic, as if it was slapped together hurriedly.

The Gilliam version is richer, more absurdist but also more quietly menacing. The extended escape sequence is a blending of the possible with the dreamlike, where an audience member should be clued in that what we are seeing is not what is real. In particular it is when during Sam's escape he not only crashes the funeral of his mother's equally plastic-loving frenemy but manages to fall through her coffin. It's a surrealist moment that should reveal that it was all in Sam's mind.

The Gilliam version also through the dream sequences show that the real world is invading Sam's fantasy world, one where he is not the winged hero he imagines himself to be but highly vulnerable to the real world's horrors.

Brazil at least has an exceptional leading performance by Pryce. He is an Everyman, not particularly ambitious but not a revolutionary either. He makes Sam into someone who at heart wants to do well but who is also rather passive in his acceptance of tyranny until Jill sparks a slow sense of revolution. Palin too does excellent as Jack Lint, the cheerful, pleasant face that has no qualms about torturing and killing people. As he states to Sam when he reprimands Jack for taking the wrong man, HE, Jack, didn't kill the wrong man. He merely had the wrong man delivered to him. 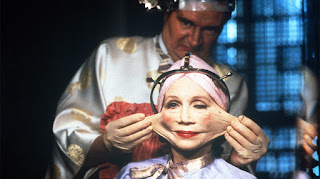 Lint is the face of all those who say "I was just following orders", which makes his outwardly pleasant demeanor and family life all the more terrifying.

Brazil also has a wildly comic turn from Helmond as the vain Ida, thoroughly disinterested in her son save for the prestige he can give her by moving up. Her outlandishness is what makes her so memorable. Greist as Jill and the Dream Girl plays two characters, but she does a fine job as the woman who is or is not a real revolutionary so much as a sensible person fighting against an uncaring, insular system.

There is an absurdist, surrealist quality to Brazil. It is clearly in an alternate universe, but in its costume and production design we see echoes of a fascist aesthetic: the massive Brutalist buildings, the fedoras and coats. It is a daring film, full of wild visuals that also speaks of the menace of a remote governing body that discourages individuality and personal freedom.

If it has a drawback, it is in its length. At over two-and-a-half hours, Brazil may eventually tire one out. Too much dark whimsy may be too much to bear for some viewers, who may find themselves either falling asleep or slowly losing patience. On that part at least I can see the studio's worry that Brazil may be too much for some audiences.

Brazil perhaps may be too eccentric and long for some, and I wouldn't blame them if they ended up not liking it. However, the shorter "Love Conquers All" version may leave them equally confused in a shorter amount of time. My recommendation is to accept the Gilliam-approved version will be longer, more absurdist but better than its shorter twin.