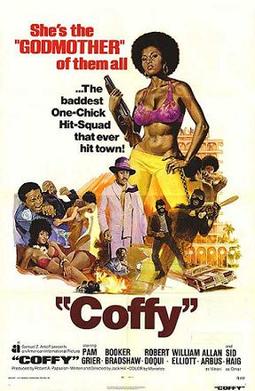 Coffy is unique in the genre of blaxploitation cinema for a variety of reasons. First, the protagonist is a woman. Second, the female protagonist is a professional career woman. Third, it goes against the grain by not portraying drugs or crime in a glamorous light. Nearly fifty years since its release Coffy has aged a bit with its urban trappings but with a strong debut from its star Coffy is a pleasant surprise.
Flower Child Coffin, Coffy for short (Pam Grier) is a nurse who moonlights as an avenging angel. She kills the drug kingpin and pusher who got her eleven-year-old sister LuBelle (Karen Williams) hooked on heroin. Coffy feels great guilt about the killings, but she feels justified, especially given that her friend Officer Carter (William Elliot) won't break the law to enforce it.
While Coffy is fond of Carter, she is carrying on an affair with City Councilman Howard Brunswick (Booker Bradshaw), who is on tap for a potential Congressional seat. Coffy sets her eyes on another drug kingpin, known as King George (Robert DoQui), who is part of a ring that nearly killed Carter for not being on the take (and whose thugs assaulted her in the process). She becomes "Mystique", a Jamaican call-girl, to get close to King George. 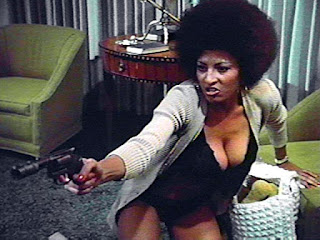 Her plan though goes awry when her efforts to kill Arturo Vitroni (Allan Arbus), the major drug lord, fail. Vitroni mistakenly believes Coffy was sent by King George, leading to his death and putting her life in danger. Ultimately though, Vitroni and his allies should have known better than to mess with a strong black woman.
In certain ways, Coffy is quite amateurish. Some of the acting is rather stiff, including Pam Grier. However, one can cut Grier some slack as this was her first starring vehicle. The film is at times more interested in showcasing Grier's incredible body and bust than in giving her strong dialogue.
Coffy is unapologetic about its displays of women's bosoms. We get treated to quite a few topless moments, though I would argue few if any are gratuitous. Whether that includes a catfight where various women's breasts are exposed is questionable, but this sequence also includes a surprising moment involving Coffy's hair.
Director/writer Jack Hill made ample use of not just Grier's breasts but of her body: our introduction to Coffy shows a beautiful, alluring woman. However, Coffy also gave us moments of serious drama and a believable character: she is unafraid to use a shotgun on those causing misery, but she also feels guilt and struggles with whether her actions are right. A lot of that is forgotten once we get Coffy's ultimate betrayal and her revenge, but it's a credit to the film to include such elements. 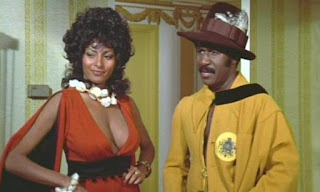 It's also a credit to Coffy that it had positive portrayals of police and nurses. Officer Carter and Coffy are the good guys, and the interplay between Grier and Elliot is sweet. Grier can turn up the heat whenever she's seducing someone as part of her revenge, and in Coffy one can see what makes Grier not just a compelling screen presence but also a heroine.
At times her acting was a bit forced, particularly when attempting more straightforward drama. However, credit where it is due: her "Mystique" sequence showed an ability to handle accents well enough. While Coffy was not her film debut it was a major step forward, and she makes the most of this fascinating vigilante: sexual yes, but also motivated by justice.
Coffy, as I stated, is surprising in that it does not glamorize or praise drug dealing or pimps (even if King George appears in a-now almost comical pimp outfit complete with strut). In the middle of the lesbian titillation and catfights we have a brief moment where Flower Child visits her recovering sister, followed by a debate between Coffy and Carter about whether her "metaphorical" actions are right. Coffy is far ahead of its time in showing drugs as dangerous versus adventurous. It is also ahead of its time by showcasing a strong female lead, willing to take action.
This isn't to say Coffy isn't afraid or vulnerable, but that's what makes her a believable heroine: she has moments of doubt, of vulnerability, of being menaced. She, however, faces them on not without fear but aware of them and knowing the stakes are too high for her to fail.
Coffy is a product of its time, particularly in the soundtrack. From the hip soul opening to some of its songs, it is clearly a blaxploitation film. While the opening song Coffy is the Color is good, I think modern audiences would find King George hilarious to almost spoof.
On the whole though, despite some amateurish acting and fight scenes (particularly when Coffy faces off against Harriet, a barely-concealed butch lesbian), Coffy has a strong positive message and a powerful screen presence from Pam Grier.
DECISION: C+
Posted by Rick at 6:56 PM