Although I'm entering my third decade of life I confess that it was only after watching Miss Potter that I read any Beatrix Potter stories. How is that, you may ask. Well, I will tell you: I never had any exposure to them, period. They were never read to me by my parents (whom I'm guessing have never heard of Squirrel Nutkin or Benjamin Bunny) or by my teachers. I have heard of them, but they did not form part of my childhood memories. Miss Potter is the biopic of the prolific children's stories authoress, a nice, light, charming affair...rather like Beatrix Potter's stories.

Beatrix Potter (Renée Zellweger) is a spinster by choice, having decided never to marry. Instead, she is focused into taking her stories and animal drawings to various publishers, where she is given the Victorian version of a brush-off. That is, until she goes to the Warne brothers, where her book is accepted, if only to give this sure-fire failure to their youngest brother, Norman (Ewan McGregor). Norman, with his youthful enthusiasm (and handlebar mustache), differs from his brothers in his opinion of The Tale of Peter Rabbit, which he finds fascinating and is sure will be a massive bestseller.

Soon Beatrix becomes friends with Norman and his sister Millie (Emily Watson), who like Beatrix is over thirty and choose to remain unmarried. Soon, Potter's stories take Britain by storm, and Norman falls in love with her. At the Potter Christmas party, he proposes, and Beatrix abandons her views on marriage and accepts.

Her snobbish mother Helen (Barbara Flynn) and indulgent father Rupert (Bill Paterson), who have never seen eye to eye on almost anything involving Beatrix or her career, surprise her by being of one mind about the marriage between Beatrix and Norman (both oppose it). Beatrix is adamant, and eventually a deal is struck: if she joins her parents on their annual summer vacation in Britain's Lake District and keep the engagement a secret, they will not object if Beatrix and Norman still wish to marry at the end of the summer.

Near the end of the summer, as the chaste lovers await the arrival of fall and a chance to finally be together, Beatrix is informed that Norman has taken ill. She rushes back to London, but is informed by a heartbroken Millie that Norman has died. Beatrix is overcome with grief, locking herself in her room and hallucinating that her characters are going mad themselves. Eventually she emerges from her mourning and moves to her beloved Lake District, where she begins buying large farms with the help of her childhood friend/solicitor (a form of lawyer) William Heelis (Lloyd Owen), whom we are told in the end she married. 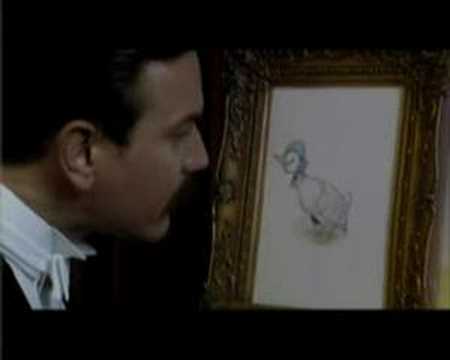 Miss Potter would probably be rejected as fictional (it seems almost cinematic that Norman would die shortly before Beatrix returned to London and they could announce their love publicly), except for the fact that the film is based on actual history. Norman & Beatrix were secretly engaged, and Norman did die before they could marry. The fact that the film stayed close to historic facts is a plus, making it both more realistic and tragic.

Director Chris Noonan created one of the best period films in the past few years, not just in the costumes or sets, but in how the characters act and behave. The scenes between McGregor (no relation to Mr. McGregor from The Tale of Peter Rabbit as far as I know) and Zellweger have a romance to them, but it's a stifled one, one that isn't expressed with overt passion but with gentle sighs and smiles; it's a purely Victorian, chaste romance, almost completely virginal.

This adds to the romance between Norman and Beatrix, as when he shows her how to dance to the song Let Me Teach You How to Dance, which thanks to Nigel Westlake's score and Richard Maltby's lyrics has a nostalgic tone which adds to the general gentleness and innocence of the romance. Through Miss Potter, our leads kiss only once, and given how Norman and Beatrix have been throughout the film it makes this scene all the more romantic and touching.

Although I hadn't read any Beatrix Potter story, I have heard of Beatrix Potter herself, and I had been led to believe that she was really a misanthrope who in reality disliked children (I might have been confusing her with P.L. Travers, author of Mary Poppins). Renée Zellweger's performance made me believe otherwise.

Zellweger is an old hand at British accents (having ridden to an Oscar nomination with the quintessential British girl Bridget Jones), but she adds both a strength and innocence to Potter. At times, she did come off as an upbeat Emily Dickinson (a spinster who was a little bit insane), especially when she talked to the animal drawings as if they were real, along with the fact that she saw them move. However, she comes across as a woman confident in her ability to write and draw and with an enthusiasm for her work. The moment when she communicates the joy of love without speaking, with only her face to express what is in her heart, is a wonderful, beautiful, and delicate performance.

She is equaled by McGregor, who here isn't heroic or action-oriented, but who projects a quiet shyness and innocence in Norman. His gentle performance is a perfect match to Zellweger's, and they form a sweet couple who discover the joys of love. Both show in their characters that they have an internal need to prove themselves to the world, and their performances show the strength within Norman and Beatrix.

Watson is full of life and energy as Millie, who is more liberated in her views than the more prim-and-proper Beatrix, but who also shows herself to be a good friend to Potter. Flynn's Helen could have been a villain, but while she is a snob and clueless to her daughter's career, she isn't evil but just wrong.

One thing I got out of Miss Potter was how Beatrix really was at the forefront of the conservation movement. This is covered in the last act, where she buys several pieces of property around Hill Top Farm, which she bought to get away from her parents and her memories of Norman. It's good that this aspect of her life, especially her foresightedness that these areas needed protection from industry for future generations to enjoy, was shown.

If there's a flaw in Miss Potter, it has to do with her relationship with Heelis. There isn't any suggestion between Zellweger and Owen that they will fall in love, let alone marry. In fact, until we read in the film that they did marry I thought Potter remained a lifelong spinster. This, however, is a small flaw.

Miss Potter is a film that appears true to life, as if it came straight from Victorian life. The performances made these people real, and it gives us a chance to see Potter not as a caricature (I still don't know where I got the impression that she hated children when in the film she comes across as a loving and bright woman), nor as a distant and remote historic figure, but a vibrant, intelligent, and passionate woman (at least, as passionate as the times would allow).

Admittedly, there were moments when I questioned Potter's sanity, but minus that, Miss Potter is a reflection of her literary work: gentle, sweet, pleasant, as soft and light as a bunny.