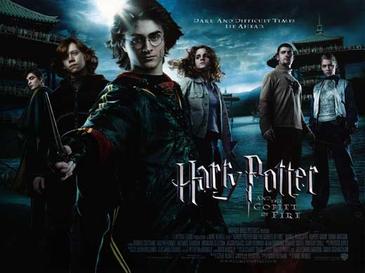 HARRY POTTER &
THE GOBLET OF FIRE

Put Some Fire Under the Potter...

This Harry Potter film, the fourth in an epic series of eight (the seventh book being split into two films) finally gets it right, mostly. Of course, I'm not a fan of the books, having read only one and finding that one a bit underwhelming. I figure that they have to be a bit repetitive because each year Harry goes off to Hogwarts, faces great danger, and comes out all right. Have I got the gist of it?

That being the case, Harry Potter & The Goblet of Fire put things in that were needed (a genuine sense of danger/darkness/terror) and took out things that were always needless (no Dursleys!). As a result, what we have is an actual film that shifts the franchise from the cuteness of the Columbus films to the darkness, even evil, within the world of Hogwarts under new director Mike Newell.

Harry Potter (Daniel Ratcliffe) is not with his Muggle relatives for once but with the Weasleys. He joins them to go the the Quidditch World Cup (I figure a bit like the FIFA World Cup, except for Quidditch), and it's the final match between Ireland and Bulgaria. It's here though, that chaos breaks out: Lord Voldermort's murderous henchmen, known as Death Eaters, crash the festivities, killing and destroying and of course threatening Harry's life. Be that as it may, Harry, along with his friends Ron Weasley (Rupert Grint) and Hermione Granger (Emma Watson) still go off to Hogwarts.

There is a special event this year: the Triwizard Tournament. Future wizards/warlocks/witches (whatever they're called) from other schools: The Beauxbatons Academy of Magic of Girls from France and the Durmstrang for Boys from Russia, or at least some Slavic country even if the name sounds vaguely German. They are coming to compete against the British co-ed Hogwarts for the championship.

Professor Dumbledore (Michael Gambon) informs them that the winner will receive great glory, but must survive THREE EXTREMELY DANGEROUS TASKS (begging the question, are there ever any other kind?). Anyone seventeen or over who is willing to face these THREE EXTREMELY DANGEROUS TASKS must submit their name into the Goblet of Fire, which will select one champion from each school. Since Harry & Company are fourteen (although none of them actually look fourteen, so we have to suspend disbelief for a bit) they concentrate on their studies, with yet another Professor of Defense Against the Dark Arts: Alastor "Mad Eye" Moody (Brendan Gleeson).

The Goblet now releases the names of the competitors: from Durmstrang: Viktor Krum (Stanislav Ianevski), from Beauxbatons (which sounds like Beautiful Batons) Fleur Delacour (Clémence Poésy), and from Hogwarts Cedric Diggory (Robert Pattinson pre-Twilight). Then, the Goblet unexpectedly releases a fourth name, an unexpected choice. Any guess as to who was named?

Now, they have these three competitions (all dangerous): getting a golden egg away from a dragon, rescuing someone from the bottom of the Black Lake, and the third, and most dangerous of all, entering a maze that could devour them to reach the Triwizards Cup. Through each danger (with some sequences extremely frightening) Harry is always aided by others, be it his bumbling classmate Neville Longbottom (Matthew Lewis) or even Cedric. However, in the midst of all this Harry has two great issues to deal with: Lord Voldermort is still Out There, plotting to rise again and kill him, and a greater horror...dating!

I suppose this is what elevates Goblet of Fire from all the previous films. It has the requisite menace from Lord Voldermort and his Death Eaters, but also has something everyone can relate to: the teenage rites of passage. This is most explicitly shown at the Yule Ball, a Christmas Eve dance where guys have to ask girls out. In the midst of all the danger and evil going on, there are real human emotions being played, among them love, lust, fear, and jealousy. To my mind, Grint is becoming far more than Ratcliffe's sidekick, but a serious actor who is emerging out of the shadows. Goblet of Fire introduces something into the mix between Ron and Harry: resentment. We all know that Harry couldn't have put his name in the Goblet of Fire, but Ron doesn't believe him, and Grint's face expresses so much: a combination jealousy and anger against Harry that is both brilliant and frightening in its intensity. This is a realistic view because in every friendship at some point there will be conflict, perhaps even jealousy and resentment. When Harry & Ron make up, that also plays realistically, as does when they both realize they have to ask girls out to the Yule Ball. These moments where we see our characters as real people is what elevates Goblet of Fire into a better film in the franchise than we've seen before.

Newell also gives us more visually. Following in Prisoner of Azkaban's footsteps, there is very little lightness in Goblet of Fire, which is again dominated by grays and blacks. Even the moments of visual splendor, as when the students from Beauxbatons and Durmstrang enter the Great Hall of Hogwarts is visually arresting in its pomp and ceremony (although, for my tastes, a bit unrealistic).

I wonder if J. K. Rowling--whom I understand to now be the Citizen Kane of all British writers--toyed with the idea of sending her Hogwarts students to Beauxbatons or Durmstrang. Now that would have been interesting: to see our heroes in another setting. We might as well, given how little Maggie Smith's Professor McGonagall or Alan Rickman's Professor Snape had to do in the film. Even Tom Felton's Draco Falfoy were almost incident to the overall plot. It's debatable whether this is good or bad: it's good to be able to concentrate the story on our three main leads, but it does sacrifice almost everyone else.

THERE WILL BE A SPOILER HERE.
READ AT YOUR OWN RISK.

Goblet of Fire has some of the most intense sequences in the franchise so far, so frightening that I wonder if it's a good thing to gear these films toward children. Things as small as Sirius Black (Gary Oldman) emerging from the fire in a fireplace to seeing four people lying at the bottom of the Black Lake to the Maze, where at last Lord Voldermort finally rises, in the form of Ralph  Fiennes (whom I thought was just a touch hammy, but given Lord Voldermort is suppose to be the embodiment of evil, I'll cut him some slack).

This issue with the violence reaches the culmination with the killing of Cedric, which to my memory is the first real death in the entire film (everyone else up to now was merely frozen or somehow able to be revived). Frankly, I wonder why everyone was surprised that we had a character murdered (since we were told it would be EXTREMELY DANGEROUS).

However, why would parents or adults allow children to participate in such gruesome, potentially deadly activities, even if it is in a world of magic?  Is that me being far too logical about fantasy stories? 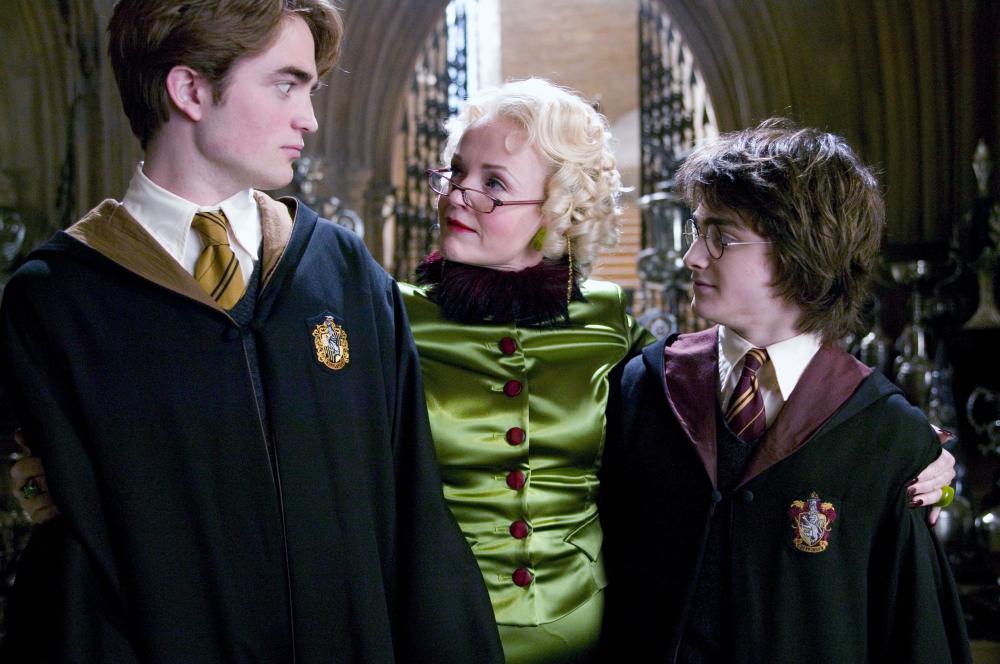 If we go over the acting of some of the guest stars, we can't say that Goblet of Fire pushes any great cinematic borders. Pattinson is pretty to look at (given he was a former model, that's not surprising) but he really didn't have much to do with the story. It is nice though, to hear him speak with his native accent. He didn't show any great acting ability here, so whether his awful performances in the Twilight films are a result of the weak material Stephanie Meyer gives or of Pattinson's lack of talent is still up in the air.

There is some comedy thanks to intrepid (and insipid) reporter Rita Skeeter (Miranda Richardson, continuing the trend to behave as if the Harry Potter films were the new Shakespeare where every brilliant actor is fighting to get a role in them, which has me asking where are Sir Derek Jacobi or Sir Christopher Lee, or aren't they good enough for them?).

When I saw that the Weasley's tent at the Quidditch World Cup was larger on the inside than the outside, Harry might have been impressed, but I wasn't. I've seen that before--has Rowling or screenwriter Steve Kloves ever heard of a little art-house miniseries called Doctor Who?  This tent, it wouldn't be called 'a TARDIS' now would it?

The Doctor Who connection continues as we have as Barty Crouch, Jr., none other than The Doctor himself (David Tennant), it's not a surprise we have a TARDIS tent. I like Tennant as an actor (and yes, as the Tenth Doctor as well), but I couldn't help laugh at some of the faces he makes as he's led away. They were almost comic, not frightening.

ANOTHER SPOILER HERE. BE WARNED.

As with any Harry Potter film, we have those lovely Deus Ex Machinas that will always get Harry out of everything. The D.E.M. isn't as atrocious and insulting as the Time-Reversal deal Hermione had in Prisoner of Azkaban, but it still was completely out of the blue: it was the spirits of Mr. & Mrs. Potter as well as Cedric Diggory coming to give Harry more power to fight Voldermort and escape from the maze, leaving a frustrated and furious Voldermort.

I suppose there was no other way a fourth-year wizard student could possibly defeat the greatest force of evil, but it all seemed a bit too convenient. As usual, Harry himself doesn't have to do anything himself to get out of danger; it's done for him.

I think a line the Weasley twins tell Harry at the end of the Black Lake Challenge sums up the entire Harry Potter franchise perfectly: "Even when you go wrong, it turns out all right".

Goblet of Fire is a frightening film, I'd argue too frightening for anyone under 14. I wouldn't let my preteen children see it or for that matter read this particular book until they get older. Given all the ones that have come before, I'd say that's a good thing in terms of film. This chapter centers the story where it should be: on Harry.

It gives real emotions like love and hate a greater prominence in the story. It still has what all previous Potter films have: a great length (two and a half hours--will they ever be under two hours) which again I think is wrong for films geared toward children. However, the darkness, the danger, the humanity within Goblet of Fire makes it the best Harry Potter film of the franchise so far.

After a few stumbles, Harry's Back!