There is something unique about Moon. It's a science-fiction film that doesn't serve as allegory but isn't an action/adventure film. Rather, Moon takes the premise it gives us via Nathan Parker's screenplay (based on an original story by director Duncan Jones) and builds it to a logical conclusion. That any film make sense in its own world is already a remarkable achievement, but Moon makes it interesting and intelligent.

Man has discovered a new source of energy: Helium-3. This resource is found on the surface of the Moon, and Lunar Industries (which I guess has exclusive mineral rights given the lack of competition on the surface of the Moon) has only one miner on the dark side of the satellite: Sam Bell (Sam Rockwell). He is coming to the end of his three-year term, and is looking forward to being reunited with his wife Tess (Dominique McElligott) and daughter Eve. As he counts down the days, he keeps tabs on the machinery, aided only by GERTY (voiced by Kevin Spacey). As Sam continues his life in splendid isolation, he starts hallucinating, seeing things that may/may not be there. He goes out onto the Moon's surface and has an accident.

A short time later, Sam wakes up but suspects GERTY and Lunar Industries are plotting against him. He tricks GERTY into letting him go out again, then makes a shocking discovery: there is another crash with someone inside: Sam himself. Who is the real Sam? Is it in his mind? What will happen when this rescue ship, the Eliza, comes to the Moon? The Two Sams (which to distinguish between them I referred to as Red Cap Sam and Uniform Sam) unite to find the ultimate in shocking news about their true identity.

Moon asks all those deep questions about identity and the nature of self without being overly metaphysical. What is wonderful about the film is that it gives us a logical answer to all the questions Red Cap/Uniform Sam ask. The sterile and cold sets of Moon enhance the fact that Sam is alone, as does Clint Mansell's sparse yet effective and other-worldly score. 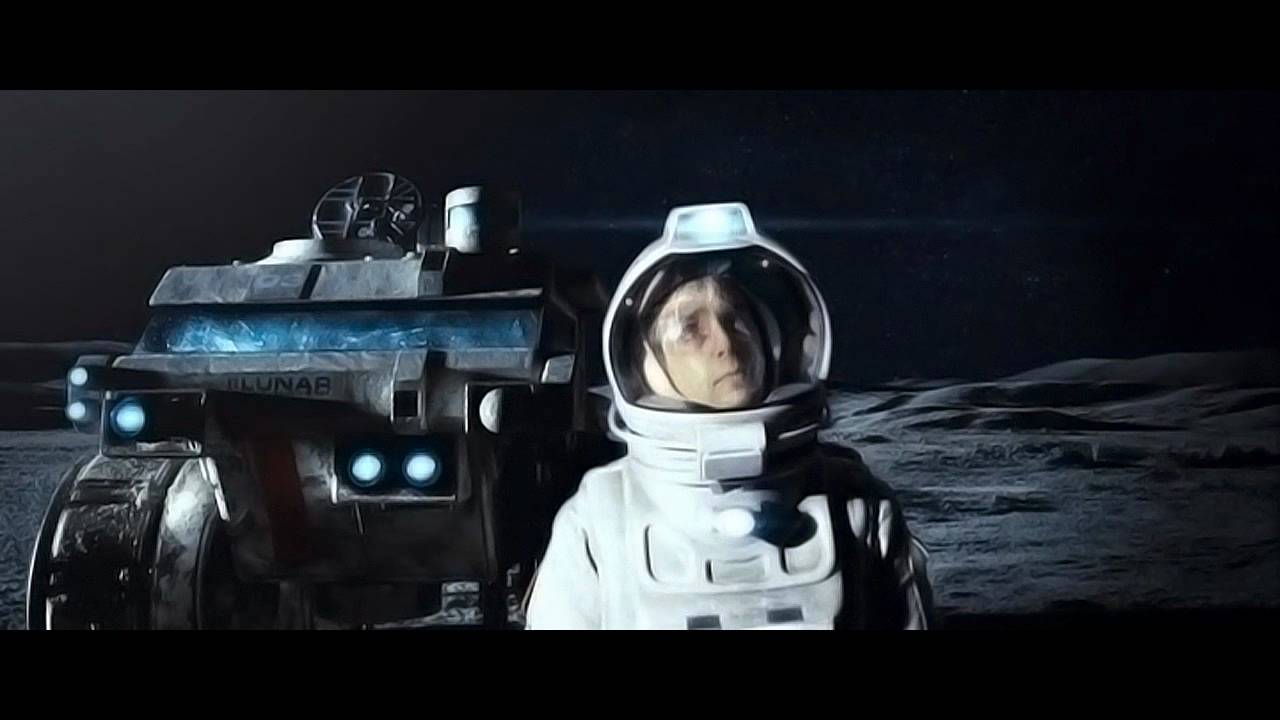 At the heart of Moon is Sam Rockwell. This is my view of Rockwell as an actor: he's very talented but has the unfortunate tendency to lapse into what I call the Blue Steel school of acting. If you see his face in film, he looks like he's trying to be Zoolander: pursed lips and narrowed eyes. I think this is just the way he is: even when he's in public he gives that look. Sometimes it can seem so odd to the point you can't take him seriously.

In Moon, he still has that when he is Uniform Sam, but he also brings a fear and sadness to both Sams. It is incredibly difficult to act with yourself because you have to basically play two character, and Rockwell does this well. His angry Uniform Sam is different from his more resigned Red Cap Sam, and at times you do forget they are not different people, let alone being played by the same person. He not only has to act with himself, but in almost all respect be the only character in the film.

He doesn't have someone else to act against physically, and all these aspects stretch Rockwell as an actor. Luckily, he has the talent and ability to carry it off. The fact that Moon was written for Rockwell (or at least with him in mind) helps him tremendously.

The negative aspect of Moon is that it is far too reminiscent of 2001: A Space Odyssey, right down to HAL 9000's gentle cousin, GERTY. It might have been the intent to be similar to Kubrick's film, but comparisons are impossible because Duncan is almost begging us to compare them. Spacey has a perfect voice for GERTY, who unlike HAL has a heart of sorts. Like Douglas Rain's voice for HAL, Spacey is monotone and emotionless as GERTY. The only emotions we see are by images of faces GERTY flashes: a smiling one when everything is all right, and a sad one (complete with tear) when he has to tell Sam bad news. He gave a good performance but again, one can't help waiting for GERTY to sing Daisy Bell before the end.

Overall, Moon is a deep, intelligent film which might be a little confusing at first but which by the end gives the answers to the mysteries it presents us. At a little over an hour and a half it doesn't wear out its welcome, and anchored by a strong performance by Sam Rockwell, Moon delivers on a science-fiction premise that sometimes has not been used well before. Let Moon's light shine on.

Is it me, or is Sam Rockwell trying to show he'd be perfect for Zoolander 2?