A Witch Is A Dream Your Heart Makes...

I'm a stickler on foreign-language films: by and large I support subtitles and am opposed to dubbing. Having one group of actors speak lines over the performances of others actors strikes me as akin to destroying the film. To my mind, the original performances were the performances intended to be seen by everyone. I can see myself supporting dubbing when the original actors recreate their performances in another language (Catherine Denueve in English or Jodie Foster in French for example).

This isn't wrong to my mind because the original actor is merely recreating his/her role. The same holds for animation, for the most part. Hayao Miyasaki (aside from being a genius) has a way of transcending that rule. It might have to do with the fact that strong English-speaking actors are hired to speak the lines. It could also be that the animation is just so good that the voices in any language, done well, will always fit the images. This is the case with Howl's Moving Castle, a brilliant film that shows animation is not the same as 'cartoons', which unfortunately most Americans tend to think as one and the same.

For reasons of this review I will be discussing the English-language version of Howl's Moving Castle, and thus I will refer to the English-speaking actors as opposed to the original Japanese actors. 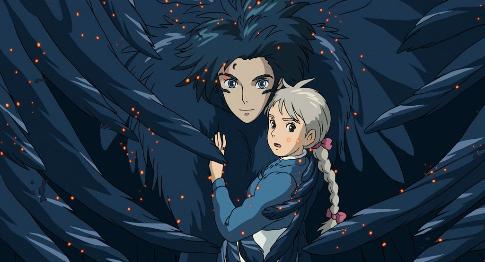 Sophie (Emily Mortimer) is a shy, insecure milliner in an unnamed land (though given that the novel the film was based on was written by British authoress Diana Wynne Jones it would be safe to say that it suggests the United Kingdom or France). She goes through life no sense of her true worth, doing her best to stay out of the way of such beings as the wizard Howl (Christian Bale) or the Witch of the Waste (Lauren Bacall).

One day, a mysterious man saves her from a group of rough soldiers harassing her, literally whisking her up. Later that night, a mysterious woman comes to the shop. Sophie tells her the shop is closed, but discovers too late it is the Witch of the Waste, who has now cursed her, turning her into an old woman, right down to her voice (Jean Simmons). Sophie opts to run away and see if she can find a way to reverse the curse, coming across a scarecrow-type being she names "Turnip-Head", and Howl's Moving Castle. She ventures in, and there meets the fire demon Calcifer (Billy Crystal), a young apprentice wizard named Markl (Josh Hutcherson), and Howl himself. Sophie decides to become their cleaning lady, much to everyone's confusion. 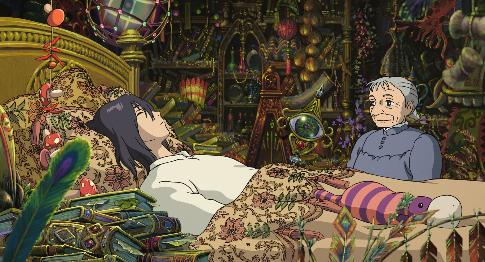 While he is a powerful wizard, Howl is a bit of a wimp and coward, running away from the Witch of the Waste and the powerful sorceress Madame Suliman (Blythe Danner), who is the Court Sorcerer. Suliman demands both Howl and The Witch of the Waste aid the kingdom in their war against a neighboring nation, and while the latter jumps at the chance the former wants nothing to do with either the war or Suliman, his former mentor.

Sophie goes in his place to reject the kingdom's request for service, but Suliman will have none of it. She already turned to Witch of the West into an old woman with no powers and will do the same to Howl if he continues to refuse. Howl manages to rescue Sophie and even the Witch, where they take flight in his castle. Sophie learns Howl has been transforming himself into a bird to stop the bombing raids, but soon Suliman and her Shadow Henchmen track the group down. Howl wants to sacrifice himself for Sophie and vice versa. Eventually they help each other, and even help Turnip-Head, who has been devotedly following them and joining them for most of their adventures.

Howl's Moving Castle has extraordinary imagery, which has become the trademark of Miyazaki. In the first few moments, when Howl's Castle is marching in the fields, the mists are so beautifully drawn that they do look real. There is also a beautiful moment when the mysterious stranger rescues Young Sophie and they literally walk on air. The scene is already beautiful as filmed, but Joe Hisaishi's score makes it pure magic. The art direction is amazing: there is this feeling of a Belle Epoque world, which when juxtaposed with the flying battleships makes it even more breathtaking. 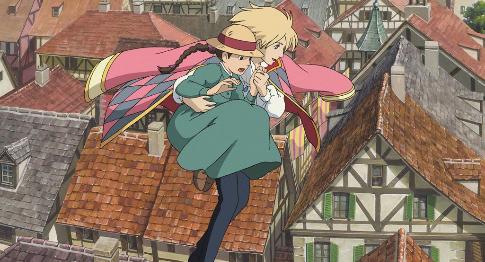 There are also intelligent themes in Howl's Moving Castle. The firebombing of Sophie's village must in some way be a collective Japanese memory of the firebombing of Tokyo during the Second World War. The imagery is so similar, and terrifying. Miyazaki is a pacifist, and the condemnation of war is evident.

If I may digress, there are scenes early in the film when the population cheers the coming of war (which were reminiscent of scenes from Doctor Zhivago to my mind), but at the end, when the citizens are being bombed and forced to flee, we can see the eagerness of war replaced by the horror of war. A second, more subtle theme, is that of how governments use technology (in this case, the wizards) for the pursuit of war; when one thinks about how governments today spend billions upon billions to build and pursue nuclear bombs while their people go hungry, homeless, and uneducated, is not something left in the realm of fantasy films (unfortunately).

The voices are brilliant. Bale shows that, while being mostly serious in Howl's Moving Castle (as he is in most every project he's in) he actually can be funny, especially when Howl mourns the loss of his beautiful hair color. Simmons and Mortimer convince us that they both are Sophie in various stages of age: the latter with a shy innocence and the former with a calm wisdom. Bacall manages to shift our view of the Witch of the Waste as well, starting as the villain in the first part to then make her into almost a sweet yet shrewd grandmother in the latter, and even being a lovelorn woman near the end. 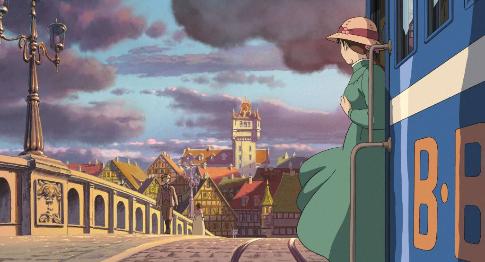 Hutcherson (who was 12 at the time) makes Markl an endearing character, one who is eager to be as powerful as Howl but who also yearns for the love of a mother/sister-type. Danner is calmly cold as Suliman, who is determined to be victorious, but she never rages like a traditional villain. It is her calmness as Suliman that makes her more frightening, but in the end we see even she has a lightness to her. Crystal's voice is very distinctive, to the point where I kept thinking it was Billy Crystal and not Califer. It was the weakest point because it made it look like Howl's Moving Castle was going for the cute factor, something aimed strictly for children when the film is far richer and deeper than that.

Howl's Moving Castle is beautiful, intelligent, a work of a true master. The only real flaw in the film is that people may see that it is hand-drawn and decide it is for children only. This is a tragic mistake many parents make: thinking that if a film is animated, it must be made for those in elementary school and not for them. Far from it.

Howl's Moving Castle is a film for everyone. Children may enjoy it, but adults will appreciate it. It's the intelligence both behind it and within it that elevate it about most "children's films". Parents should watch the film before putting it for their children to decide if their offspring will be able to enjoy it.

"The heart is a heavy burden", one of the characters says. This kind of insight is not found in many films, and it's extremely rare in an animated one. The film is a pure work of imagination and wisdom blended in extraordinary visuals. Howl's Moving Castle is just that: moving.

My hat goes off to Hayao Miyazaki.