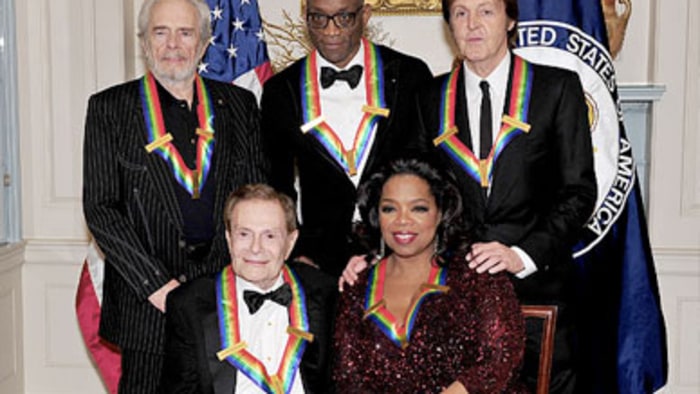 Alas, Betty White did not get recognized this year. Could it be she's too popular, too "White Hot" so to speak? It isn't as if they could use the ratings.

I also confess that I'm disappointed that none of my suggestions were used, although one person that I had on my shortlist has been selected for this year's honors: Broadway composer Jerry Herman.

Now, this is the list of this year's honorees:

I will start out by saying I have absolutely no idea who Bill T. Jones is. I figure he's from the world of ballet, and minus former Honorees Maria Tallchief and Mikhail Baryshnikov I don't know any ballet stars. Haggard's recognition is well-deserved: his career has been going strong for more than 30 years. Herman? Of course--who hasn't sung a bit of Hello, Dolly! in his/her lifetime, let alone something from Mame or La Cage Aux Folles.

Now, I find it very interesting that Sir Paul is being re-honored. Let's remember that in 2002 he had been selected as an Honoree but asked that it be postponed for a year due to "an inescapable personal obligation". They did, but then reversed their decision and opted not to present a Kennedy Center Honor in 2003. Come a few years later, and he's back. It goes without saying he is deserving of the honor: as a songwriter, he has few peers (no pun intended). However, I do wonder why they opted to re-reverse their decision.

Finally, we come to Winfrey, who strikes me as the odd member of the bunch. Minus getting Barack Obama elected President, what exactly has she done for the arts? What has she done artistically that puts her in the same league as Joan Sutherland, or Fred Astaire?

She doesn't sing, she doesn't dance--acts a little. Let's see: present/produce television movies that weren't major television events (such as Their Eyes Were Watching God or A Raisin in the Sun)? Producing the stage version of The Color Purple? Yes, she gave a wonderful performance in the film version of The Color Purple, but I am hard-pressed to think of what else she's done artistically. You have The Women of Brewster Place and the bomb Beloved, but other than that? 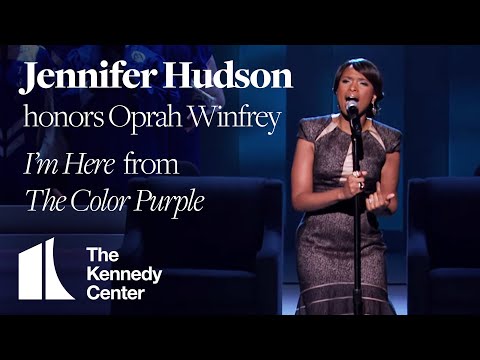 WHAT HAS SHE DONE ARTISTICALLY? Will they show clips of her wheeling out pounds of fat on her talk show? Will we have a musical salute to Eckhart Tolle, Deepak Chopra, and Dr. Phil? Maybe we'll be treated to a long montage of how The Secret will save America. Perhaps a herd of dancing cows to celebrate her victory against the cattle industry when they sued her over comments on her chat-show?


I suppose it comes from my world view: I'm not fond of confessing all to all the world. My father had a saying, "Confession is good for the soul but best saved for your priest". By that he meant one should be able to talk about their deepest issues and problems, but it should be limited to either your spiritual advisor or your closest family/friends. In short, I am opposed by the "Oprahfication" of our country. That type of situation, where people go on television, tell everyone their biggest issues/sins/crimes, and asking 'to be loved' is anathema to my sense of being. I just feel this age of confession is wrong, and it shouldn't be celebrated, but then again, I'm not the billionaire.

Well, there it is: this year's Kennedy Center Honorees. I'll still watch, and I'll still suggest names. There are a lot of artists who should get recognized for their accomplishments. I think Miss Winfrey is an erroneous choice while all the others are right decisions, but, there you go.

Congratulations to all of this year's recipients.
Posted by Rick at 8:37 AM