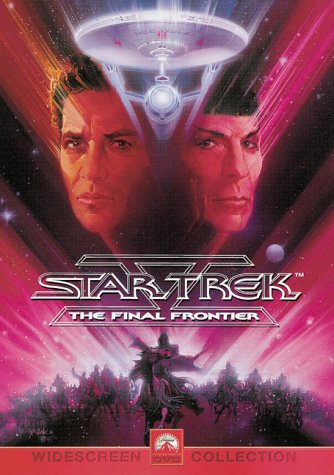 In the ultimate case of "If he can do, why can't I?", William Shatner decided that he was just as good a director as Leonard Nimoy was in The Search For Spock and The Voyage Home. With that in mind, he decided to direct Star Trek V: The Final Frontier.


The Enterprise is going through major retrofits. This proves to be a blessing in disguise, for it gives most of the crew an opportunity to take shore leave, and apparently they decided en masse to go to Yosemite National Park. In one group, are Captain James T. Kirk (Shatner), Mr. Spock (Nimoy), and Dr. Leonard "Bones" McCoy (DeForest Kelley). In another group, is the comedy due of Anton Chekov (Walter Koening) and Mr. Sulu (George Takei). Scottie (James Doohan) is continuing to bring the Enterprise up to speed (no pun intended), when their shore leave is cut short via an urgent message.

There is trouble on the planet Nimbus III, which is located in the Neutral Zone. The ambassadors from The Federation, the Klingon Empire, and the Romulan delegation have been taken prisoners by a ragtag army in the poorly-named Paradise City, and the Enterprise is sent to rescue them from the Galactic Army of Light (or as I've dubbed them, GAL).

A rescue attempt is made but it has all the efficiency and success of President Carter's rescue of the American embassy hostages. Now the Enterprise itself is captured, and we discover GAL's leader. It is Sybok (Laurence Luckinbill), a renegade Vulcan who has rejected the cool, dispassionate logic of his people and embraced all emotion. He is also Spock's half-brother, the son of Sarek and a Vulcan Princess no less.

Sybok is a powerful being, able to with just his words bend the will of almost anyone. Almost, I should point out. Neither Kirk or Spock and to a lesser degree, McCoy want to go where Sybok wants to: beyond the Great Barrier to see what Vulcans call Sha Ka Ree, Romulans call Vorta Vor, Klingons call Qui'Tu, and Humans would call Heaven. In short, Sybok believes that beyond the Great Barrier is God Himself. Using his powers Sybok crosses the Great Barrier and he, Spock, Kirk, and McCoy encounter a being who proclaims to have "one voice, many faces". As it turns out, maybe this being isn't The Divine. As if all this weren't enough, in mad pursuit of the Enterprise is another Klingon ship who wants to engage the Enterprise for glory and revenge. 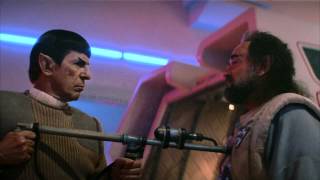 The Final Frontier, I don't think, was trying to answer any deep metaphysical questions about life, death, or what truly there may be beyond our comprehension. The end result doesn't answer any questions or really add anything to the Star Trek mythos except Spock's extended family tree. David Loughery's screenplay (based on a story by Loughery, Harve Bennett, and Shatner) appears to try to go into deeper themes, but it is undone by not being able to give answers to even the most basic questions The Final Frontier poses.

Take for example just who is the being they encounter beyond the Great Barrier. It becomes quickly apparent that he is not God as understood by any of the world's religions, let alone by whatever concept Romulans, Klingons, or Vulcans may have. However, we never learn who exactly he is or why he's kind of just laying about beyond the Great Barrier or how he got there. Was he just waiting around until someone came along to give him a lift?

Since we never learn who or what he is, we really don't care because in spite of being the object being searched for he really isn't all that important to the plot as presented to us. Yes, he is a bit like V'Ger from The Motion Picture or the big floating tube from The One With The Damn Whales: the thing that the characters are after/want explained but which has no existence outside the story itself.

The bigger problem in The Final Frontier is just how uninteresting the whole adventure is. This I blame on the screenplay, which did not give them a powerful adversary. Sybok comes across as nothing more than an off-kilter New Age Guru: a Vulcan version of the Maharishi Mahesh Yogi, able to soothingly convince, daresay, hypnotize anyone to do his bidding. Everyone who comes under his power in The Final Frontier appears to be in a form of haze, so Sybok really is nothing more than a Cult Leader; even GAL's name is vaguely cult-like.

When we see exactly how he manages to turn them to his side, it plays out like nothing more than a therapy session gone wildly awry. It also leads to one of my pesky Points of Logic. It appears he is able to tap into their innermost secrets and pains to convince them to apparently seek redemption by going beyond the Great Barrier and see God. However, when Sybok shows us both McCoy's and Spock's hidden worlds, they apparently are visualized to where everyone can see them. Thus, when Sybok shows Chekov his past (which we don't see, but I suspect he sent someone to the Gulag, he is Soviet, after all, since in The One With the Damn Whales we learn Leningrad is still around in the 23rd Century), does this mean everyone aboard the bridge saw it? I'd be embarrassed by all my secrets being on public display, but I digress.

Luckinbill is very enthusiastic as Sybok, and he is able to command the presence of a vaguely Jesus/Buddha-like figure, but overall he is the exception. The performances I think are not as strong because Shatner decided to throw in bits of comedy where they weren't needed. There is a seemingly endless camp scene between Kirk, Spock, and McCoy that doesn't build up their relationship but that is just going for laughs at the expense of Spock's inability to understand why Row Row Row Your Boat is worth singing, and when they say goodnight to each other, one wonders if they are going into The Waltons territory.

More comedy comes in the way of Doohan, where he tells the main three attempting to retake the Enterprise that he knows the ship like the back of his hand. Any guesses as to what happens to Scotty immediately after? There is also a rather embarrassing scene when first attempting to rescue the hostages that involve a seductive dancer that frankly ends up being rather creepy.

Shatner's direction was weak to say the least. The action scenes weren't exciting: the storming of Paradise City were rather bland and boring, with no sense of tension and excitement and danger that the endeavor would have warranted. Same goes for the crossing of the Great Barrier, which wasn't all that great, and wasn't all that dangerous. The battle with the Klingon seemed almost superfluous to The Final Frontier, almost as if it had to be there because the Klingons are the Federation's greatest nemesis.

On a side note, I think The Final Frontier would have benefited greatly from having another villain either from the series or an original creation lead them onto the Galactic version of Mt. Sinai. When Sybok is telling us his plans to go to Sha Ka Ree, Shatner's direction almost makes it look like he's speaking directly to us, which appears rather offsetting, not to mention bizarre.

Finally, the subplot of the poor shape of the Enterprise is abandoned as soon as Sybok takes the ship. We never hear about all the difficulties the ship is facing even though we are led to believe it will be be a major part of the plot. The reason for this is simple: we can't go crossing the Great Barrier in a rickety old ship now, can we? Dropping story elements like these when they are no longer convenient is a sign that The Final Frontier just didn't have anywhere to go.

Ultimately, The Final Frontier is a rather dull, lifeless affair, and whatever good Sybok could have brought is wasted on a silly journey that really takes them nowhere. For all the dangers the Enterprise faced in trying to meet God, they really learned nothing.

It's almost enough to make you an atheist.

Next Star Trek Film: Star Trek VI: The Undiscovered Country
Posted by Rick at 6:45 AM