The Dilemma: A Review

Let's Be Adultery About This...

I think Vince Vaughn would make a great narrator, not just because he has a good voice but because he has a knack for setting up either the plot of a film or the conclusions the film reaches. He goes for the former in The Dilemma, telling us early on that basically, you can't really know people even after years with them.

For the rest of the film, Allan Loeb's script attempts to prove this, but neither it or director Ron Howard are unable to decided exactly where to take The Dilemma, which makes it either a weak comedy or an odd drama.

Ronny Valentine (Vaughn) and Nick Brannen (James) are not only business partners, they are the very best of friends. Together, they appear to subconsciously quote The Pet Shop Boys' Opportunities (Let's Make Lots of Money): Vaughn's got the looks, James' got the brains, to create an automotive revolution: a new technology that will make hybrid cars attractive to men by giving the cars the power and roaring engine sound of a hot rod with the efficiency of a hybrid.

As they continue with their endeavors, they enjoy life with their significant others: for Vaughn, it's Beth (Jennifer Connelly) his longtime girlfriend, and for James, it's Geneva (Winona Ryder) his wife. Vaughn decides to propose to Connelly and while scouting locations, he comes upon a shocking surprise: Vienna in the arms of a much-tattooed hunk named Zip (Channing Tatum).

Vaughn keeps this secret to himself at first, for fear of pushing the already-on-edge James over the tipping point, but eventually he knows James has to know the truth. Therefore, he does what any sensible man in his 'dilemma' would do (hence the title): he tells Vienna that he knows. At first she says she'll break it off but we learn she won't, and when confronted again Vienna tells Vaughn that she isn't the only one who gets love on the side.

Seeing the difficulty he is in with James, Vaughn does what any other sensible man in his position would do: he follows Vienna and Tatum to Tatum's home with a camera to photograph them in compromising positions. As it happens, Tatum and Vaughn fight, which makes Vaughn late for Connelly's parent's anniversary dinner where Vaughn makes a bizarre speech about honesty.

Connelly, however, suspects Vaughn isn't being honest and that he's fallen off the wagon for his gambling addiction; did I forget to mention he had a gambling addiction? To help him, she stages an Intervention, and among those there are James, Vienna, and even Zip (whom James, having followed Vaughn, suspects is his bookie). Here, everything comes out, and while James is understandably devastated, they soldier on in their business, though not without a few punches being thrown. Eventually, all's well that ends well, with these bestest of best friends solidifying their bromance, their ideas being successful, and even managing to score, in hockey.

You may have noticed that in my summation of The Dilemma I didn't use the character's name. The reason for this is very simple: it really doesn't matter what their names are because for all intents and purposes they are playing the same characters they've played before. Kevin James plays the Kevin James role: a clueless husband/schlub (although, to his credit, we are suppose to believe he is a genius). Vince Vaughn plays a Vince Vaughn type. You know,

We really don't have to worry about either Connelly or Ryder since they don't appear to have any outside existence (or last names) or even that they would be friends if not for Ronny and Nick (see, I do remember the character's names). I do confess to deliberately misnaming Ryder's character as Vienna as opposed to Geneva because A.) I kept remembering it was the same name as a European city, and B.) Vienna as a name sounded more realistic than Geneva. Minerva I could believe, but Geneva? Why not Oslo or Bratislava? As for Zip, it's a memorable name, so we might as well stick with it.

The Dilemma doesn't break any new ground, and it doesn't attempt to, so we shouldn't be too harsh in how it approaches the material. We even get the rather cliche scene where by the sheerest of coincidences Vaughn is at the exact place where Geneva and Zip are having a rendezvous. It even goes the way one would expect a present-day romantic comedy to go:  have all the characters be incredibly stupid in how they handle things.

For example, rather than get a professional to tail Geneva, Ronny opts for a do-it-yourself model of operating, apparently unaware at just how difficult it is to follow someone without being noticed (especially if the person doing the following is 6'5"). He also apparently doesn't even bother to check the camera he accidentally left at Zip's before handing the 'incriminating' evidence to Nick. 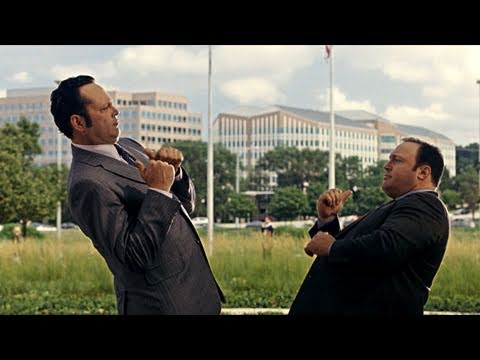 The 'Vietnamese sexy-time' aspect of the story is dropped pretty fast, to where it is never mentioned by anyone, so it does become irrelevant to the story. (Side note: honestly, if you had the choice between bonking Kevin James and Channing Tatum, is that meant to be a had decision?)

We might shift our affection for Ronny, but given how the idea of revealing such a shocking secret to his longtime girlfriend apparently never entered his mind, we can only speculate as to how much trust there is between them. The fact that he continues to hide it not merely because it might be upsetting to his BFF but because it might also cost him a fortune makes him slightly selfish in his secrecy.

The real downturn in The Dilemma comes at the Intervention. It's here when the film makes a wide turn from comedy to a remarkably heavy drama. The gambling addiction angle along with the actual revelation of Geneva's affair, though nothing is mention of Nick's dalliances with girls who tell him they love him long time, are directed as if Neil Simon had morphed into Edward Albee. It never fully recovers any sense of humor until we get to the very end, where the scene at the Chicago Blackhawks hockey game seems merely tacked on and attempts to remind us that it was suppose to be a comedy.

Having already covered Vaughn playing a Vince Vaugh-type and James a Kevin James-type and seeing that neither Connelly or Ryder had anything resembling a fully-formed character, we can shift to two others in The Dilemma. Queen Latifah has at most three scenes, and she is there to show that a woman can be just as sexually suggestive in her dialogue as her male counterparts. Channing Tatum is there to show us that he can't handle comedy, thus showing that while he's pretty, he fails at both drama and comedy (a remarkable feat indeed). He simply tries too hard to make things funny instead of letting the humor flow naturally from the situation, and his face never registers anything resembling any emotion to where one starts to wonder if it's because of a lack of talent or possibly an excess of Botox.

I digress slightly to point out a scene near the end of the film, where James and Vaughn confront each other right before having to give their joint presentation. Seeing them face each other is quite a sight because it only emphasizes just how tall Vince Vaughn is and short Kevin James is. James' height is officially at 5'8", and seeing stand before the 6'5" Vaughn makes their nine inch difference look even more odd, almost as if we were going into Gulliver territory. One almost wondered whether they could get both of them into frame.

Finally, I also want to address the controversial 'gay' line. There was an uproar when the trailer opens with Vaughn saying that 'electric cars are gay'. In fairness to the trailer, Vaughn's character does point out it wasn't meant to offend actual gays but that electric cars were somehow not 'masculine' enough. That line, though cut from the trailer, remains in The Dilemma. I don't see anything in the pasts of Vaughn or Howard to indicate they are bigoted, but I would have cut the line altogether, less so because using 'gay' as a pejorative isn't a smart move (although I could see how gays would be offended even though it sadly is used in a rather common manner), but because it just isn't funny.

In fact, must of The Dilemma isn't funny, and where it tries to be, it fails. However, in one instance I'll stick up for the film: in the trailer we see Vaughn make a Helen Keller reference, showing just how dumb he is. Unfortunately, no one laughed at this joke at the screening I went to, and my suspicion is because they flat-out didn't get the joke. They did laugh when Latifah's character said to Vaughn, "I'm your Deep Throat".

On a personal level, I think it's rather sad that Americans get a Deep Throat joke but a Helen Keller one goes over their heads. Can we as Americans be that ignorant of history, let alone that dirty?

The Dilemma isn't a funny film, especially when it decides to become a dramatic one. No one stretches as actors which given that Vaughn has genuine talent, is especially sad; unsolicited advice to Vince Vaughn: do some drama and stop being the Vince Vaughn-type

There really isn't anything to recommend in the film. It's not a dilemma; it's a bore.