I LOVE YOU PHILLIP MORRIS

Last year while in London, I saw adverts for I Love You Phillip Morris all about the Tube. I was surprised that this film did not play in America first, and I thought about going to see it in London but time was against me.

As time went on I Love You Phillip Morris kept getting delayed and delayed, heaped with controversy, even scandal. No distributor! Jim Carrey engaging in gay sex! There was doubt the film would ever be seen outside DVD. Now, I Love You Phillip Morris has arrived in a wider release, nearly a full year after its foreign release. Was it worth the wait? Did it live up to its shocking pre-release reputation?

It has moments of high intelligence, but somewhere along the way, I Love You Phillip Morris runs out on us faster than Carrey's character runs out of prison.

Steven Russell (Carrey) is a police officer married to Debbie (Leslie Mann), a God-fearing woman. By all appearances, Steven is happy with his wife and child, except for some issues. One, that this adopted child was rejected by his birth mother, and two, the fact he is gay. He manages to keep his life private until a massive car accident, which he feels liberated him to be his authentic homosexual self.

Without missing a beat he dumps his wife, moves to Miami and gets himself a young boy-toy, Jimmy (Rodrigo Santoro). As Steven so helpfully tells us, "Being gay is really expensive". To finance his lavish lifestyle and in his mind, keep Jimmy happy, he turns to a life of crime: usually either faking injuries and suing the establishments or simple fraud. Eventually, he is discovered and after an either humorous or gruesome escape/suicide attempt (depending on your point of view). Steven is locked up.

In prison, he becomes the unofficial King of The Joint, procuring anything for anyone. There, he sees a vision of pure loveliness, a most divine being. He meets this beautiful boy at the prison library, and learns his name, the most beautiful sound he ever heard, to quote a song. His name is Phillip Morris (Ewan McGregor).

Phillip and Steven instantly fall in love, and thanks to Steven's powers in prison he manages to put them together in a single cell and thus, allow them to pursue their romance with passion. Once Steven is released, he hoodwinks the State of Texas into releasing Phillip, and the two resume their passionate romance. However, old habits die hard, and Steven now wants to treat Phillip like the King he is to him. Therefore, it's back to a life of crime, this time as the Chief Financial Officer of an insurance company.

As Phillip is oblivious to Steven's larceny, the company is oblivious to Steven's larceny, until he is caught yet again. Phillip, who not only finds himself caught up in his True Love's web but who discovers he was let out early through fraudulent means, breaks with Steven and is back in prison. Now, Steven attempts various methods to break out and be reunited with Phillip, right down to in a certain way faking his own death. Eventually, we are told that Steven is kept inside prison for twenty-three hours of the day due to his rather outrageous and ingenious escapes. 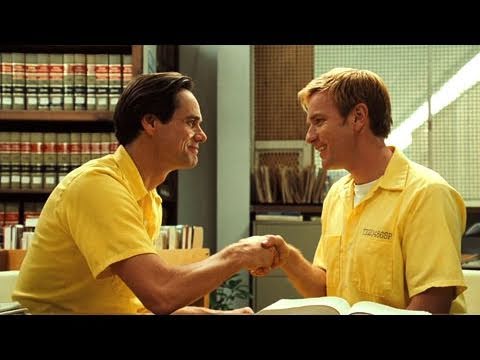 I Love You Phillip Morris is frankly too bizarre to be believed, but what makes it even more bizarre is that it is a true-life story. Co-writers/directors Glen Ficarra and John Requa, adapting the non-fiction book by Steven McVicker, keep the story remarkably grounded in spite of the rather outrageous nature of it precisely by emphasizing the outrageous nature of it all.

While we are told early on this is a true-life story, the elements within it are just so flat-out bizarre that we can't help but laugh at both Steven's ingenuity and the clueless minds of prison officials, judges, and insurance company bigwigs who can be so easily fooled.

Take for example when Phillip and Steven share their first slow dance and kiss. It is quite a romantic scene, and they are so in love with each other that the fail to notice a group of guards attempting to silence the man in the next cell who is providing their love song. The fact that the romance between Steven and Phillip is so oblivious to anything in the Outside World elevates the comedy.

Another point of humor is the mutually confused and accepting role Debbie has in Steven's life. When he is caught for the first time, she asks Steven's boyfriend, with a perfectly straight face (no pun intended) if Steven's criminal behavior is a result of his homosexuality. Though it is an odd question, she actually is closer to the mark than she realizes since Steven is committing all this fraud in order to buy the happiness of first Jimmy and later Phillip.

Mann is not a large part of I Love You Phillip Morris, but her Debbie is a woman who does love Steven even if his life and lifestyle do confuse her. It's a brief performance, but a strong one. 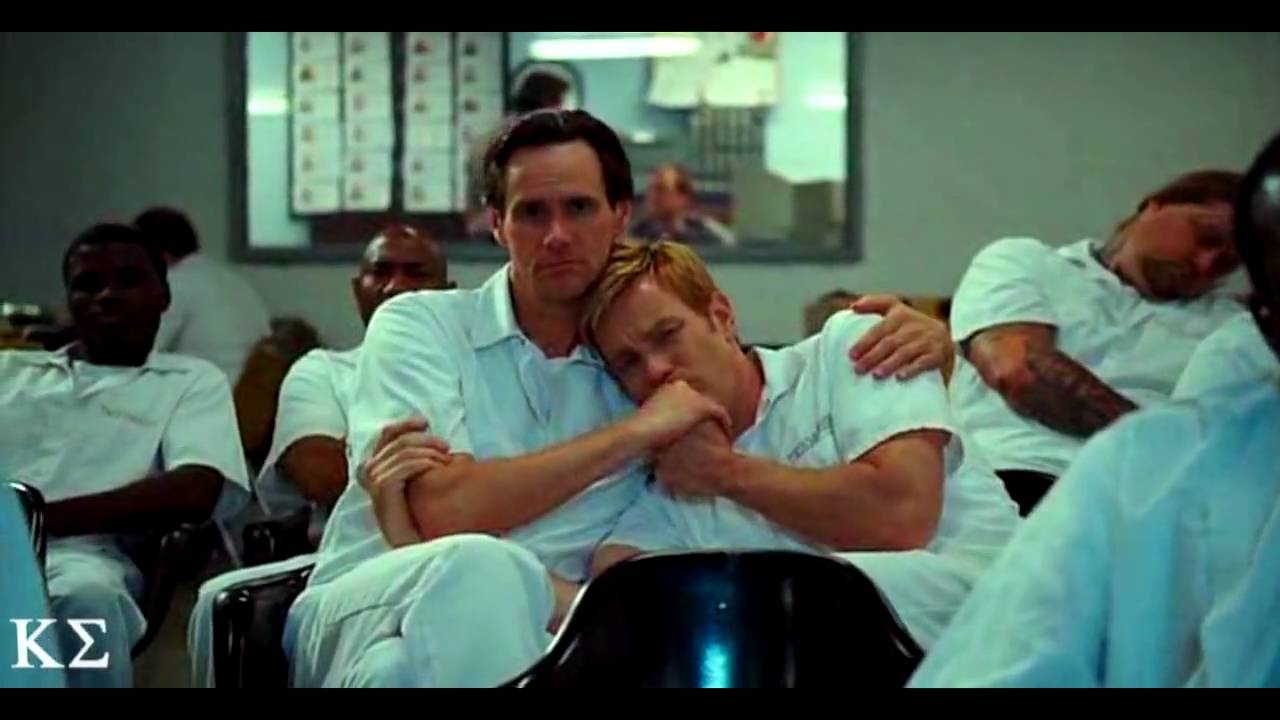 Carrey creates a rarity for him: an actual performance with Steven. He is so believable as a upstanding man who loves his wife and daughter that when we do discover his 'secret' (which in voice-over he freely tells us), it is a bit of a jolt. By the end of I Love You Phillip Morris, we come to admire his audaciousness, if not his methods. Carrey never goes overboard with the more flamboyant aspects of Steven's persona but instead plays him as a man who is motivated by love, most of the time.

We also see through Carrey's performance a man who is also considerably selfish and does not shrink from hurting people that genuinely love him, someone who will go to almost any method to escape the consequences of his actions. On at least two occasions, he attempts suicide, but they are not the acts of a man who no longer wants to live but a man who wants to escape one last time. Anyone who would use AIDS to try to get out of a predicament can't be held up as folk hero.

What is surprising is that while Carrey has the comedy aspects of I Love You Phillip Morris down, he also shows a surprising gentleness, even heartbreak, to the dramatic scenes. Near the end, he recalls the last days of his time with Jimmy, and just with his face he communicates the heartbreak of losing someone he loves, although, given what we've seen of Steven Russell, it's always open to debate just how capable he was of loving anyone totally.

At the end, Steven is rather a sad and pathetic figure: a man who expresses love through what he can give others materially. In all his relationships he's never been honest, and in spite of how much Debbie and Phillip care for him, Steven is never able to give of himself. It is his lack of honesty in all aspects of his life, be it with his lovers or his employers, that make Steven a tragic character. Carrey shows a range that he usually isn't thought of having, and here he gives an adult performance to counteract his image as a rubber-faced, rather manic comic.

Carrey's shady Steven is matched by McGregor's innocent Phillip. McGregor adopts a remarkably convincing Southern accent, which helps in his interpretation of a rather sweet man who sees his Steven as his soul mate. One does question if Phillip is rather naive about where exactly all their money is coming from since, in spite of knowing Steven's past, he never questions him about just why, for example, Steven gets a Christmas bonus in July.

McGregor makes his Phillip simply a man in love, perhaps in love with love, but certain in his sincerity of feeling toward Steven. He is a man who loves deeply but not too well. The best thing about McGregor's performance is that he never makes Phillip a figure of ridicule, even when he clearly is being played for a fool.

As good as the leads were, I Love You Phillip Morris stumbles near the third act when it takes a very dramatic turn. After seeing so much lunacy in how Steven manages to get away with so much like when he fools a judge into not only thinking he was a lawyer, but actually winning his case through basically rambling off nonsense, we get thrown a rather dark tale involving AIDS that kills the comedy. We also switch from a story of a con man into one of a desperate man who tortures himself and emotionally tortures others to stay out of prison. Once we think we have reached a conclusion, we get thrown another loop.

At the screening I went to, audiences were laughing at Carrey's tender love confession to Phillip, which I don't think was the intended effect. Once we slip from marveling at Steven's cleverness at outwitting officials, we start to feel some revulsion at how his antics affect those unfortunate enough to get caught up in them. This unbalance tilts the movie down a bit, but it manages to keep itself afloat enough of the time to survive some rather dark moments in I Love You Phillip Morris.

It is quite true that truth is stranger than fiction. Few people would believe Steven Russell could get away with so much so often or that the love of his life has the same name as the tobacco company. However, the story is true, which makes it all the funnier. Now I confess not laughing at much of I Love You Phillip Morris because it all just seemed so bizarre, and one of his suicide/escape attempts seemed rather horrifying.

Truth is Strange, but then again, Love Is Strange too, isn't it?