To celebrate the New Year, I have decided to go back into the past. Every first of the month (or thereabouts) I hope to have personal reflections on twelve cinema giants, twelve directors who have shaped film into what it is today. I thought it only appropriate to begin the first with The Original: David Warks Griffith, who perhaps is not The Father of Film, but certainly the first truly original cinema master.

Griffith did not invent filmmaking, nor did he actually create the cinematic techniques we know today. He didn't start such things the close-up or the intercutting between stories, but he was the first one to put them together to make what we now know as "the modern motion-picture". If it were not for D.W. Griffith, we would not have film the way we do now.

Curiously, Griffith also showed the power cinema can have on the public. The Birth of A Nation still touches on the nerve because for better or worse, many people at the time held the imagery to be accurate. When I think of The Birth of A Nation, I can't help think of another film: The Battle of Algiers. Both have been used as recruiting tools for their causes (the KKK and Islamic terrorism respectively), and both still have a powerful impact to arouse passions. However, I don't think Griffith cared too much what the impact of his films in society would be. He just wanted to make an entertaining and popular film that would be a hit.

If we take a closer examination of The Birth of A Nation, we see how all the techniques that had been floating about in film came together to create modern cinema. Take the climatic siege sequence near the end of the film. The family is surrounded by the "enemy" on all sides, and the Ku Klux Klan is riding to the rescue (it nauseates me to write such nonsense, but there it is the movie). Griffith created the tension by going between the family and the Klan, cutting with quick clips to heighten the tension. Will they get there in time? Will the girls be captured?

It isn't so much the imagery that creates the anxiety, but the inter-cutting between the two points. It is more than likely that in another person's hands, we would have seen either one or the other, but it took a Griffith to realize that film is not tied down to a certain point in time and space. Unlike a stage play, we can jump to two or more places involving one point in time.

Moreover, The Birth of A Nation can be said to show the power of film to affect how history is seen. We can see the same in Oliver Stone's JFK. In spite of all the evidence, people still hold that there was a massive conspiracy to assassinate President Kennedy, and JFK either reinforced that view or convinced people that Film was History. People should know that historic films will always deviate from the actual details, but somehow we get a lot of our history from film, accuracy be damned.

We can forgive films as varied as Spartacus or Elizabeth:The Gold Age or even light fare like Shakespeare In Love for not being strictly correct because they don't set out to be history lessons. However, Stone, with JFK and Nixon or W appears to be doing more than what Griffith thought of doing: while the latter wanted to push film to be thought of as an art form, the former wants us to believe he is telling the absolute truth. That would, in my view, put him closer to Leni Riefenstahl than D.W. Griffith, but I've digressed.

The point of all that is that Griffith was the first, though he would not be the last, to show that film has a power greater than any other media before because we subconsciously trust what we see. With the techniques he mastered and utilized with great skill, he created the emotional impact he was looking for, and for this, he truly is an innovator and creative force. 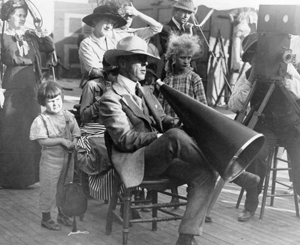 It is a sad case that a great technical accomplishment can be a person's ruin. The Birth of A Nation was condemned (correctly in my view) for its grotesque racist imagery, and I think Griffith was truly amazed that anyone would not see it as history. Curious that only fifty years had existed between the end of the Civil War and The Birth of A Nation, so there were still many eyewitnesses to the events in the film. In response, he created Intolerance.

Here, Griffith went one better: four stories in four time periods with one theme--man's inhumanity, his Intolerance, for man. He was pushing film as art like never before, but I would argue it was a little too advanced for 1916 audiences which were used to more linear story-lines. However, the impact of Intolerance has entered the American mind: the Babylonian sequence (in particular the lavish sets) is now iconic and easily recognizable, if perhaps not from Intolerance at least from a silent film.

Until the end of his career, Griffith pushed film to be art, to create mood and subtext rather than rely strictly on the image on the screen. Unfortunately, once sound came in, D. W. Griffith went out. I suspect that part of it was just changing tastes: the sentimentality he so favored was no longer in vogue, audiences wanting more realism. The stories of innocent girls being rescued from all sorts of ills: be it violent fathers (Broken Blossoms) or violent rivers (Way Down East) or violent revolutionaries (Orphans of the Storm) just didn't sell as well as it once did. It also didn't help that The Birth of A Nation had all but ruined his reputation, making him into the poster boy for bigotry and out-and-out racism. His 1935 Honorary Academy Award (when at 70 he was now a shadow from the early years) was belated recognition of his contribution to film.

In the end, we have Griffith's films. The Birth of A Nation is a brilliant film in some ways, grotesque in others, but it is still an important film that should be preserved and studied by those who love film. D. W. Griffith I think was the first to see the potential in film not just as entertainment but as a legitimate art form. I think directors as varied as Fellini or Kurosawa or Scorsese or Lynch would not have come into being Griffith.

His films have lasted, as has his impact on cinema. Granted, his personal reputation will be forever haunted by The Birth of A Nation, but if we take his career as a whole, we see a man who wanted to create something beyond the style of his time. D. W. Griffith is a great filmmaker, and as such, he should rank high and his legacy should not be lost...unlike some of his films.