They're Real. And They're Spectacular...

I've seen S.O.B. three times, and each time I arrive at the same conclusion: it's just as funny as it thinks it is.  S.O.B. now is famous for one moment, a shocking moment for audiences that perhaps mirrored the events in the film.  Curiously, this one jaw (and bodice-dropping) moment is S.O.B.'s greatest claim to fame.

In the ensuing years since I have seen S.O.B., I think I have grown slightly more appreciative of the bitterness, the anger, the cynicism behind it. I still think it was trying too hard to be funny when pulling back a bit might have done the trick.

Wildly successful producer Felix Farmer (Richard Mulligan) has had nothing but hits after hits, usually starring his wife, Sally Miles (Julie Andrews), an actress with such a squeaky-clean image that she won an Oscar for playing Mary Poppins...err, for playing Peter Pan.  That is, until a film produced by Farmer and starring Miles called Night Wind flops...hard.  Farmer is more than devastated by this.  He's in genuine shock, despondent, and suicidal.

Sally cannot cope with his slip into insanity and leaves him, but he has other problems.  Studio head David Blackman (Robert Vaughn), enraged that he's got the biggest flop in his studio's history, is determined to save Night Wind by recutting it to his specifications.  Unfortunately, Blackman can't because Farmer owns all the rights and won't let the studio "improve" the film.

Blackman recruits director Tim Cully (William Holden, in his final role) to help reshoot Night Wind and get Farmer on board.  Cully, who brings two nubile young hitchhiking girls, is shocked when he finds Farmer rolling down from his garage to the ocean (Farmer having attempted suicide by carbon monoxide poisoning but having been stopped by the gardener unaware of what Farmer was up to).  Also involved in the efforts to pull Farmer out of his funk is his friend and agent Ben Coogan (Robert Webber) and Dr. Irvin Finegarten (Robert Preston), a "Doctor Feelgood"-type who freely admits he's a 'quack'.

Somehow, all of them at Farmer's house leads to something of an orgy, where the various hangers-on are unaware of Felix's unhinged condition, or the dead man outside on the beach who died of a heart attack.  Felix keeps bumbling his efforts at doing himself in until he gets a corrupt policeman's gun.  About to shoot himself, one of the high girls slips underneath his covers and distracts him long enough for him to get THE idea: rework Night Wind from a family-friendly feature into a pornographic epic!  As Farmer puts it, giving the public what it wants: vice instead of virtue, instead of the American dream, the American Wet Dream!

He buys back all the rights from Blackman, news which outrages his wife since he's used their money. Sally is more shocked when Farmer hits on another idea: have her go TOPLESS!  Sally Miles, G-Rated Queen.  Sally Miles, who has gone from 15 years of nun's habits and turtleneck bathing suits to showing off what she has kept hidden.

Her agent, Eva Brown (Shelley Winters) and lawyer Herb Maskowitz (Robert Loggia) appear willing to go along with this in order for her to recoup some of her money, and therefore, with a lot of drugs courtesy of Finegarten, agrees to go and "show her boobies" to the world.

The reworked Night Wind then is shot, and gives the world one of the most jawdropping moments in film history...

It's now that Blackman and his flunkies suspect that Night Wind may end up being a success, but they've lost all rights to it.  They now want ownership of this pornographic spectacle, at least distribution rights (which would give Blackman a chance to get in and recut the film).  Under advise, Sally agrees to a distribution contract with Blackman without telling Felix, which snaps him back to insanity.  Determined to hold on to his film, he essentially steals the prints by using a toy gun he took from his son, and is shot to death when he tries using it on the police.

As he lays dying, he tells the security guard, whom he knows, to not worry...this ought to add another $10 million to the gross.

Sally is essentially dragged back for the elaborate funeral, down to singing Promise Me at the service.  Cully, Ben, and Finegarten, drunkenly appalled at all that's gone on, decide to steal Felix's body and give him a private, Viking funeral, taking advantage of things to switch the body over to that of the dead man on the beach (who was once a beloved television star).  As his friends set Felix's boat on fire, all Hollywood inadvertently pays tribute to a forgotten star. 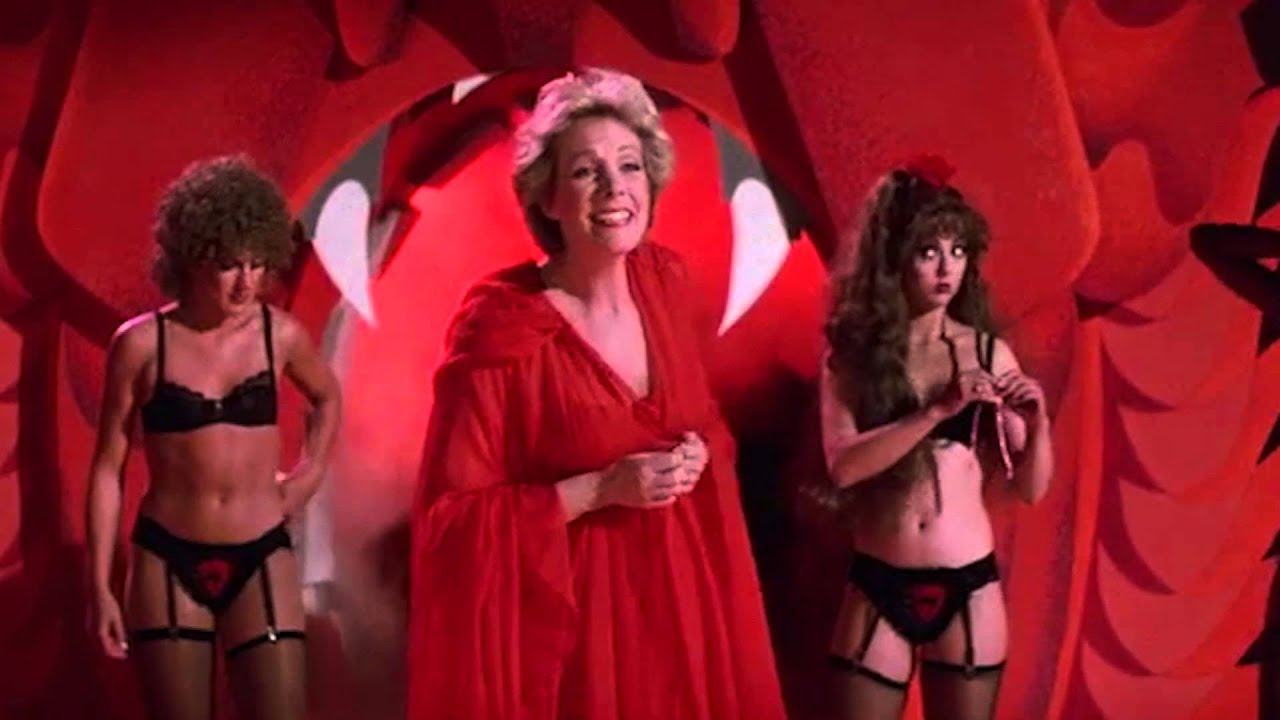 S.O.B. is cynical down to its cold, cold heart, skewering the industry that had more often than not screwed writer/director Blake Edwards and his wife Julie Andrews.  In fact, the title S.O.B. was a term they adopted between themselves, which didn't stand for "Son Of a Bitch", but for "Standard Operating Bull****". Everything about it is cold, cynical, if not strictly heartless at least with a hard and jaded heart.

It's also a much smarter script than I gave it credit the first time I saw it. Right from the beginning it played with the public's perception of Miles/Andrews with the two versions of Polly Wolly Doodle that she performs.  The song itself, this sickeningly sweet little ditty is so excessively cutesy and sweet that it borders on downright parody of Andrews' image as this perpetual virgin.

It's almost as if S.O.B. is acknowledging to the audience that, as far as they're concerned, Miles/Andrews does not swear (let alone have erotic overtones to her as a performer or a private woman).  S.O.B. is very thinly veiled, particularly with regards to Andrews' screen image, which despite some efforts at being more adult (such as The Americanization of Emily), stubbornly did not shift from that of either Mary Poppins or the nun Maria from The Sound of Music.  Despite herself, she was stuck at being seen as this almost saintly figure, and while S.O.B. wasn't the first time she'd tried to shift from that, it was the most daring step she had taken (or would ever take) to shake it once and for all.

In terms of performances I think S.O.B. is one of Andrews' better moments, playing up and playing against her screen image.  She's actually quite funny when she rages against Felix, down to in her fury throwing her Peter Pan Oscar at him, then screaming when she realizes what she's done.   Whether in the dramatic moments (such as when she's leaving Felix) or her most outlandish (when she is extremely tight right before she shoots her 'boobies' scene), Andrews never overdid anything.

After watching her infamous breast-bearing moment, I think that for Andrews, it was a particularly liberating moment for her personally and professionally, where if nothing else she showed that she was more than a singing nun or flying nanny.

Mulligan was broad as the out-of-his-mind Felix Farmer (wonder if they took inspiration from Frances Farmer) but the role called for him to be wildly bonkers.  Holden, who would die after S.O.B., brought what little heart there was to the film, though his character too had a great flaw (he had a weakness for young girls despite his own advanced age).  He was a good man in a bad industry, and in his final performance was still the professional he was.  Maybe Preston went a touch overboard with his quip-ready Finegarten (who looks like he's auditioning for Edwards/Andrews' next foray into altering her image, Victor/Victoria).

Edwards spared no one in his takedown of Hollywood, from the busybody studio heads to the gossip columnists (here played by Loretta Swit).  It's here though that I wonder whether Edwards, in his anger, couldn't have pulled back.  We get some of that slapstick he couldn't resist which you know is coming (such as when the ambulance that is holding Swit's Polly Reed drops the heavily-casted Polly when applauding Sally's tatas.  Other times, it seemed to go wildly overboard, as if trying to show how outrageous things could be.

Right after we see Andrews bust out, we see Blackman in bed with his mistress (whom he is unaware of is sleeping with the hot young actor who wants in on an upcoming film).  When we see Blackman in his romp, we discover he's in a garter.  As he calls Eva, we see that SHE in turn is sharing a bed with a black woman.  These two scenarios (Blackman's cross-dressing, Eva's lesbian) just come out of nowhere and add nothing to the plot except perhaps a moment of more outrageousness, as if anything could top Dame Julie's knockers.

In the end, it takes a couple of viewings of S.O.B. to get the full effect of what Edwards was going for. It isn't the funniest film, but in certain ways, the cynicism and anger within S.O.B. proved prophetic, as topless scenes which may/may not be relevant to plots (scenes which I dub "Julie Andrews Moments") are now more commonplace.

Given how adrift Hollywood is, perhaps we could see an S.O.B. remake...

I'd recommend you type in "Night Wind Remake" on YouTube to see the reworked Polly Wolly Doodle number (and them) in all their glory.
Posted by Rick at 10:08 PM