God's Not Dead: A Light in Darkness Review 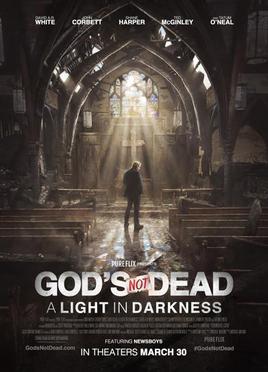 GOD'S NOT DEAD: A LIGHT IN DARKNESS

To say that A Light in Darkness is better than God's Not Dead 2 is damning with faint praise.  It was not as horrible as I was lead to think, but the fact that it could have done more with its ideas makes it a bit of a wasted opportunity.

Pastor Dave Hill (David A.R. White), previously arrested for refusing to submit his sermons to the City Council, is released.  In the impromptu press conference outside, he refers to Jesus Christ as 'the One Truth'.  This triggers a group of Millennials who object to there being anything close to 'one truth' as exclusionary.

They are also not thrilled at having St. James Church within the campus of Hadleigh College. It appears that the church predates the college, with the school built around it and there being no issue about it for almost a century and a half.  Now, however, the presence of St. James is seen as school endorsement of one religion, Christianity, over the others, and the students want the building torn down.

Pastor Dave, understandably, does not.  The hostility it brings out eventually has someone hurl a brick at the church, and in a freak accident because of that, dear Pastor Jude (Benjamin Onyango), our cheerful Nigerian pastor is killed.

Now we have a case not just of vandalism, but murder.  Our killer is Adam (Mike C. Manning), an atheist who is also dating Keaton (Samantha Boscarino), who is a wavering Christian.  She goes for advise to Josh Wheaton (Shane Harper), whom you may remember from the first film and who was absent in the second.  Wheaton is now a youth minister for a school group and a friend to Pastor Dave, who is simply not having a good time. 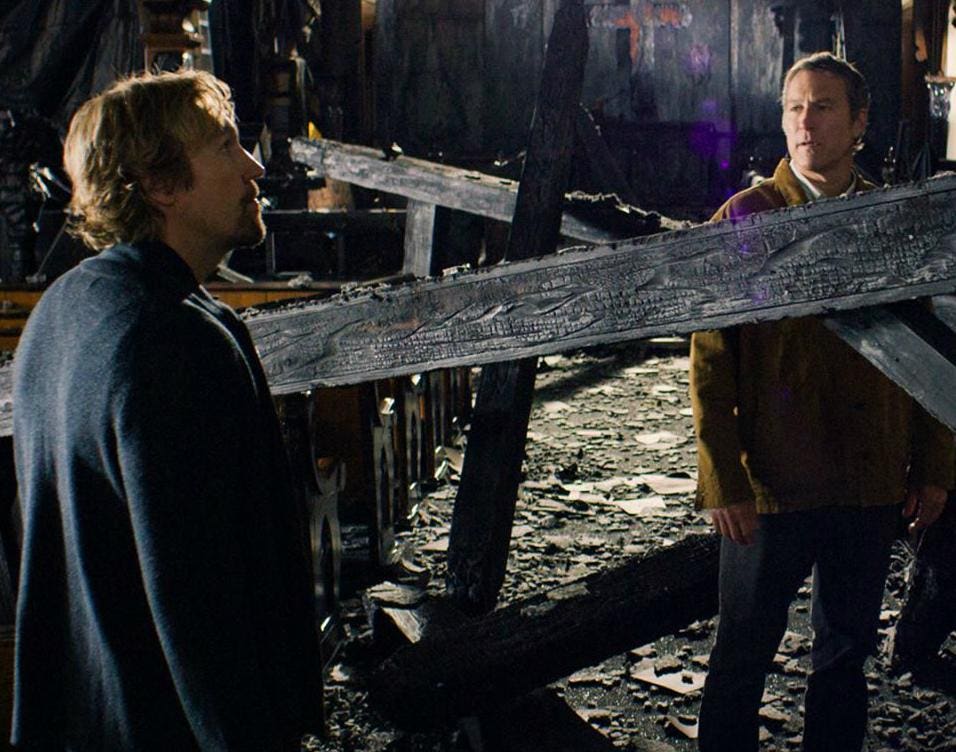 In an effort to save his church, Pastor Dave drives up to Chicago to look up his hereto unknown brother Pierce (John Corbett), who happens to be a lawyer.  At the most, Pierce is an agnostic who is on the whole uninterested in their father's church in all its forms.  However, he does agree to help where he can legally.

Meanwhile, Pastor Dave's frenemy, Chancellor Thomas Ellsworth (Ted McGinley) is being pressured to put the squeeze on the church, already in ruins thanks to the fire Adam accidentally caused.  It isn't long before the conflict gets Ellsworth beyond the emotional struggle to go after his former friend: a brick is hurled through Ellsworth's window.

As the fights go on, Pastor Dave gets a text revealing Adam's involvement.  Dave angrily confronts him, and while Adam is arrested Dave looks like a bully, which does not help matters.  After a lot of soul-searching Dave gives up: he agrees to let St. James go with the promise that Josh's youth group gets a room in the student building that will take its place, and also drops the charges against a repentant Adam.

He begins work on a new church: St. Jude.

Again, A Light in Darkness is not terrible, at least not in the way God's Not Dead 2 was.  However, by now the series should reach its conclusion seeing as how the film can't work any real enthusiasm for whatever it wants to say.  If you look at A Light in the Darkness, you see that to the film's credit, writer/director Michael Mason at least showed some restraint in how non-Christians were portrayed.

Adam, far from being a hateful anti-religion being, was, if memory serves correct, more a wounded soul looking for hope but not finding any in what he perceives as a hostile faith.  Pierce too is shown as someone who left his faith because he could not find answers to his questions and who harbors resentment, not at God or Christ, but at his family, a scenario that is surprisingly realistic.

We even get the sense that Josh Wheaton, who went from main character to supporting in this franchise, might even be more inclined to a more liberal, activist form of Christianity than Pastor Dave.  Josh points out that Christ was remarkably progressive for His time on social issues such as women's and disabled rights than His contemporaries. A Light in the Darkness also shows that Christians, or at those that side with them, can be just as cruel as those who oppose them.  We never found out who threw the brick at Chancellor Ellsworth's window, though it's clear this was motivated by animus towards the man who would drive St. James out of Hadleigh.

Then again, what should have been the main plot point of Dave's refusal to submit his sermons for review just disappeared and was never mentioned again.

That isn't the only thing that just floated in and out.  The fact that St. James was inside a college campus was hereto unknown until now.  The fact that Dave had an agnostic brother was also hereto unknown until now.  What exactly Josh did during the events of God's Not Dead 2 is still unknown.  Suggestions that our WASP Dave was too much of a whiner towards as he calls himself, 'a black preacher in the Deep South' is mentioned but then left off.

Pastor Dave's semi-romance with soup kitchen proprietress Meg (Jennifer Taylor) came and went, and I would like to point out that Christians do kiss when they find the other romantically or sexually attractive. Keaton's faith struggles were from an unknown source and I'm not sure were ever really resolved.

As a side note, 'Keaton' was a bad name, given how often it sounded like 'Kitten' to where I wondered if it was a very bizarre nickname.

I've known of White for many years given how long he's made Christian-based films.  He is a rare thing: a Christian who can actually act, but here, his performance is so weak and bland.  It's as if White and Mason pulled back on the notion that this highly troubled man could really break out into flawed human emotions, whether they be anger at Adam for accidentally killing his friend or sexual desire when he works with Meg or real resentment at having to care for his parents when Pierce left.

Much better is Harper as Wheaton, who rolls through the film like he's an actual person.  Josh is allowed intelligence and even slightly opposing views on matters.  Even McGinley, nowhere near one of America's great actors, showed the conflict with his friend.

Corbett made Pierce into someone you could relate to: flawed, cynical, sarcastic, a bit angry but also one with a wicked sense of humor and a more realistic understanding of the world.  He keeps encouraging his little brother to pursue Meg, something the more reluctant Dave won't.

As for Manning and Boscarino, they pretty much fend for themselves.

The big surprise is Tatum O'Neal's role, though her character appears so briefly one wonders why she was there.  Actually, at the end of the credits we find that Michael Tait from The Newsboys pops out, though why I have no idea.

God's Not Dead: A Light in Darkness could have been better if it had focused on Adam or Pierce or even Josh again.  Dave is not as strong of a character to lead the film.  It was a good try, but it all could have been so much better.