DAYS OF WINE AND ROSES

This, I imagine, will be one of the most unpopular reviews I will ever give, because I am going to bash a film hailed as a classic, a searing portrait of an important issue.  Having seen Days of Wine and Roses twice, I still cannot figure out why this film is held in such high regard.  There are good things in it, but I simply am mystified by why I'm suppose to genuflect before it.  I find Days of Wine and Roses a camp film, the alcoholic version of Reefer Madness, only with more polish and a lovely theme.

Joe Clay (Jack Lemmon) is a public relations man who finds his job involves procuring pretty young girls for an Arab prince.  He mistakes Kirsten Arnesen (Lee Remick) for one of our 'good-time girls' when she is really the secretary to Mr. Trayner (Jack Albertson), head of the agency.

Joe is essentially a functioning alcoholic, one for whom drinking is part of the job and who takes a couple every night.  He is hot-and-cold with Kirsten, one moment insinuating she is Trayner's whore, the other asking her to dinner.  Despite slapping him for suggesting her backside is what got her the job, she agrees to have dinner with him.  Unlike Joe, however, Kirsten does not drink.  Joe notes her passion for chocolate, and gets her a Brandy Alexander, which she admits to liking.

A whirlwind courtship leads to a quick marriage, so quick that they spring it on Kirsten's father, Ellis (Charles Bickford), owner of a nursery in northern California.  The Clays soon have a baby, but Debbie is essentially their second child.

The bottle is their first.

Joe has no problem coming home slushed out of his mind, and despite her own misgivings and the need to keep her breast milk clean, Kirsten soon joins him in boozing it up.  It isn't long before both turn into raving drunks, something that everyone but them seems to notice.  Joe's work starts suffering, and even after getting a smaller account he still keeps hitting the bottle.  As if to do him one better, Kirsten spends all her time drinking and eventually ends up setting their apartment on fire. 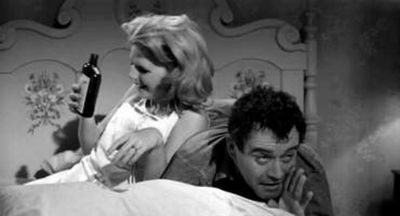 You'd think that the dual hits of setting your home ablaze and losing your job would be wake-up calls for them, but you haven't counted on how blind, self-absorbed and self-destructive they are.  Joe goes from one bad job to another, their finances a wreck.  It isn't until Joe catches a glimpse of himself in a bar window that he realizes they are both bums, being destroyed by drink.  Kirsten, who has gone from teetotaler to raving lush, refuses to entertain the notion there is anything wrong.

However, both find refuge at Mr. Armesen's nursery, where they dry out and are beginning to repair their lives.  However, dear old Joe decides that they have been so good that 'one little drop' won't hurt them, sneaking in two bottles in his pant legs.  That one little drop turns into a drunken orgy, with Joe going berserk trying to find the third bottle he hid in the greenhouse: fourth pot, third table, fifth row.  Kirsten, again apparently in an effort to top him, storms into her father's room demanding a kiss and shouting about how she does not want to be lonely.

End result: Joe finds himself in an insane asylum, wrapped up in a straight-jacket.  To help him is Jim Hungerford (Jack Klugman), from Alcoholics Anonymous.  Kirsten still won't consider the possibility that she has a problem, while Joe is more willing to go to AA meetings.  While he is working to repair himself, Kirsten is out boozing and carousing, disappearing for days on end.  Eventually, Joe finds her in a hotel room, where despite his efforts at sobriety, he falls off the wagon in a big, big way, ending by attempting to rob a liquor store that just closed.

If I understand the film, the store owner forced Joe to drink some more and once again, Joe finds himself tied to a bed, a near-raving lunatic.  It looks, however, like this time he might finally get himself together.  Following AA principles, he goes to Pop Armesen to pay back his debt.  Mr. Armesen blames Joe for getting his little girl to be a booze-licking slut, and is heartbroken at how far Kirsten's fallen.  Ultimately, Joe finds himself sober, and Kirsten tries to come back, two days sober but still unwilling to admit she has a problem, let alone stop drinking.  Joe makes it clear he'll take her back, but not if alcohol is going to be part of the deal.  As she walks away, he sees her, the neon light of the nearby bar taunting him. 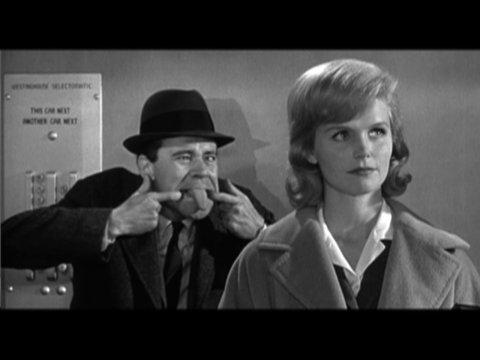 I think my problem with Days of Wine and Roses is that the whole thing seems so wildly exaggerated, almost as if it were a spoof. J.P. Miller, adapting his teleplay to the screen, seems to suggest that alcohol can turn a teetotaler into a sex-crazed nut. When both are drinking themselves mad at the nursery, I got the very strange sense that boozing it up would lead Kirsten to want to have sex with her own father!

Her storming of Mr. Armesen's bedroom, where she demands a kiss and screams at her daughter to stay away from her 'daddy' has this almost outlandish suggestion of incest, as if Kirsten's alcoholism causes her to go bonkers and screw anything with a penis.

Joe's alcoholic frolics aren't any better: twice we see that alcoholism leads to near-insanity.  Remember, he's forced into a straight-jacket at one point and held down by straps in what could be another mental hospital at another.

I am not suggesting that alcoholism does not cause respectable people, even those who drink socially, to become so out-of-control that they end up attempting robbery and accidentally burning down their home.  I am, however, wondering if alcoholism, as portrayed in Days of Wine and Roses, seems to be a portrait of such extremes that it almost is comical.

Again, I think on Reefer Madness, and how that film's portrayal of marijuana use is now mocked as wildly exaggerated to the point of being hysterically funny: from one puff we slip into sex-crazed murderous insanity.  I'm puzzled by how the same people who ridicule Reefer Madness' take on pot smoking can turn around and say that Days of Wine and Roses, with its tale of unhinged, out-of-control boozing leads to carousing and even a little bit of potential parent-child sexual desire, is a rational portrait of alcohol consumption.

I think that while this almost bonkers view of an extreme form of alcoholism is part of my issue with Days of Wine and Roses, I think a bigger part is Jack Lemmon.  As I understand it, this film is meant to showcase Lemmon as a great dramatic actor.  However, I found that Lemmon was more silly in those 'dramatic' moments, such as when he goes berserk looking for that third bottle.

It does not help that Lemmon for much of the early part of Days of Wine and Roses tries to play things for laughs, giving the same anxiety-meets-flummoxed performance he gave in The Apartment.  It's almost as if Days of Wine and Roses were a sort of sequel to The Apartment, with Joe Clay being similar in manner to C.C. 'Bud' Baxter.  Both are 'respectable' middle-class employees with career crisis in their efforts to rise to the top.  As much as Lemmon tried to do drama, and he did try, he also could not escape trying to make things 'funny' and forcing it.

From his insults and mugging at Kirsten to his 'striptease' to show off the booze, Lemmon just struck me as thinking Days of Wine and Roses was a comedy.  I simply could not take him seriously in what is meant to be a portrait of an already-functioning alcoholic slipping further into chaos and dragging his wife down with him.

I however, found Remick to have been much better.  Apart from when she appears to want to rape her father, Remick's performance was strong.  The haunted portrayal of this former non-drinker slipping into the grips of full-on alcoholic hysteria is a sad one, a bit frightening.  Whenever she is on screen, from the denials of her problem to her desperate pleas 'as a woman' to her brittleness and fears of a sober life, Remick rarely hits a wrong note.

I would argue the script fails her in her constant denials of a problem, though mercifully we never got that 'I don't have a problem! YOU have a problem!' speech.

Bickford, the only one recreating his role from the original teleplay, has a small role but a good performance as the father who loves his daughter but can't stop her from self-destruction.

Blake Edwards sometimes has fine visual moments and is unsparing in how he shows the results of unchecked drinking, but he still seems to have too many comic moments intrude.  I still wonder whether scenes that lengthen the film, such as the 'roach kingdom' date and Joe's office meetings, could not have been cut to shorten a rather long film.

I feel a touch guilty in disliking Days of Wine and Roses, finding it all bordering on comical.  Alcoholism is an important subject, and anything that brings attention to this illness should be commended.  However, no matter how hard I tried to think well of it, I cannot shake the idea that the whole thing seems so exaggerated a portrait of alcoholism.

Finally, as a side note, I cannot understand why so many great singers from Frank Sinatra to Ella Fitzgerald insist on making Days of Wine and Roses an upbeat, jolly number. To me, it's the equivalent of singing Make 'Em Laugh like a dirge. Given its somber subject and wistful, melancholic quality, I think it should be a slower, sadder number.

Apart from the song, I still cannot bring myself to hail Days of Wine and Roses as a great film.  May be blasphemy, but I can't drink to it.