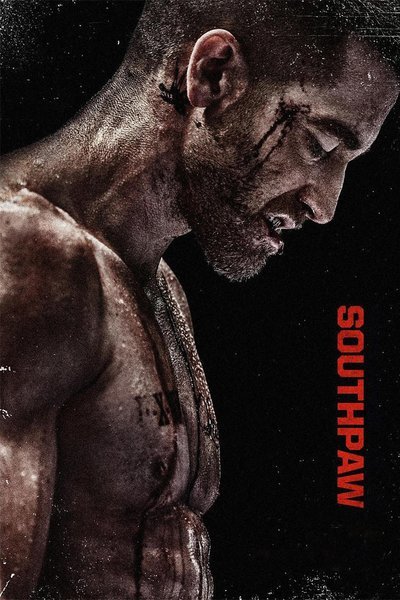 I have some pity for Jake Gyllenhaal, at least as much as I can muster for someone richer and better-looking than I.  Try as he might, he cannot get the Academy's attention.  He's done everything he can to get another Oscar nomination short of having sex with every Academy member.

Whatever the merits of his successive failures, I don't doubt Gyllenhaal's talent.

I also think Southpaw is a dreadful film, a bungled effort that is more hilarious than heartwarming, more unintentionally mirthful than moving.

Billy "The Great" Hope (Gyllenhaal) is a talented but temperamental boxer from Hell's Kitchen, an orphan with no education, who speaks in a halting manner and whose only virtues are his wife Maureen (Rachel McAdams) and their daughter, Leila (Oona Laurence). Having successfully defended his title, his manager Jordan Maines (Curtis '50 Cent' Jackson) wants Billy to keep boxing and negotiates a three-fight deal worth $30 million.  Maureen is dead-set against it, insisting Billy needs rest and to build up for the future, for she knows that as soon as "The Great" (White) Hope falls or even slips, everyone will scurry away.

At a charity event, the Hopes are taunted by Miguel 'Magic' Escobar (Miguel Gomez), who wants to fight Billy.  Insinuating he can take both Billy's belt and his 'bitch', Maureen urges Billy to walk away, but Billy being Billy, he can't let it go.  Soon, their brawl leads to an accidental shooting, and Maureen is killed off.

Billy then has a total collapse, losing it all: his fortune, his fighting skills, his entourage, and most devastating of all, his daughter.  Now Leila finds herself in the same foster care system that Billy and Maureen were in.

Billy wants to get back into shape to win Leila back, but he is suspended for at least a year after head-butting a referee and generally going bonkers.  It's now up to Tick Wills (Forest Whitaker), Billy's personal Magic Negro/crusty ex-prizefighter, to get Billy to shape up.  At a charity boxing match marking Billy's unofficial comeback (charity boxing not requiring a license), comes Jordan, who sees a perfect opportunity to make more money by having a match between a reinstated Billy and of all people, Magic Escobar.  Tick is opposed to this, but Billy needs the money to win the now-resentful Leila back (she understandably resentful).

With only Angela (Naomie Harris), the caring social services worker with Leila, Billy has the fight of his life.

Southpaw is like a bad remake of Rocky V, which is saying so much.  In so many ways, Kurt Sutter's screenplay does not even bother to mask its rather oddball aspirations.  I would recommend Southpaw be studied by future screenwriters in showing what not to do.

The boxer who loses it all, down to having a dead wife and resentful child is straight out of Rocky V.  The grizzled old trainer, the duplicitous manager, the once-happy-now-angry daughter: we've seen all this before, and we've seen it done better.  Even that awful bit about the accidental shooting is nothing new.

Worse, Southpaw manages to throw in some more idiotic elements into the mix.  No one is ever charged with Maureen's killing, and while this is in part because no one talks, in the final boxing match pretty much everyone knows that Escobar is somehow connected to Maureen's death.

Southpaw also manages to text its lofty but clumsy intentions rather quickly.  When Maureen warns Billy about how everyone will abandon him when he slips, I found myself saying 'foreshadowing'. As Billy goes through his 'dark night of the soul', no one apparently thinks to take his gun away from him.  It looks like he's coming close to suicide, and my mind briefly wandered off at this point to think it would have made for more interesting viewing if he'd gone full bonkers and held Leila and her nanny hostage.

Instead, Southpaw has a rather unbelievable storyline that has this famous boxer running around looking for Hector (Danny Henriquez) with only a hoodie to hide his face, and later having Billy survive a massive head-on collision and managing to stumble into his mansion.

Everything about Southpaw was rote and predictable (and in using 'Billy Hope' as a name, embarrassing in its metaphor shout-outs).  At the end of the Hope/Escobar fight, I predicted it would be a split decision.  That was done to 'heighten the drama/suspense', but there wasn't any.

It's the script that sinks everyone, even when they are doing work that is much better than the material.  This is not to say that there isn't blame to be handed out in that department.  Gyllenhaal was trying too hard to act rather than be.  With his soft voice and mannerisms, he came across as too actory, too showy in his performance, as if to show "I'M ACTING!".  Granted, the script gave Billy the IQ of a turnip and a hair-trigger temper but it is not a good sign when Fity manages to out-act you.

Billy appears to not understand that his recent behavior might make people question whether he's in a fit state to care for anyone, let alone a child.  In the film's continued efforts to make me feel sympathy for him, all I could feel was almost anger at his constant self-centered nature and near-total stupidity.

You hate bashing on kids, but Laurence was almost comical when she is slapping her dad screaming "I HATE YOU" after she gets locked up in essentially an orphanage.  Actually, I had a lot of good laughs at Southpaw, such as when Maureen died in an almost hilarious manner.

This was all unintentional, which makes Southpaw playing like a parody almost sad.  Whitaker does not help matters, but in his defense he is called to spout out gibberish masquerading as words of wisdom.

It just seems everything related to Southpaw was so misguided, and while I give Antoine Fuqua credit for having some good fight scenes, his actors were either excessive (Gyllenhaal) almost bored (McAdams) or a mix (Whitaker).

The film is a mess; for example, it introduces a minor character, Hoppy (Skylan Brooks) who is not allowed a story because he is killed off-screen.  It's a cheap way to try to get emotion out of us and seems to have wasted time on this long film on something that won't come.  Even the music seems misguided.  An Eminem song, Phenomenal, was the one touted to give Slim Shady a second Oscar, but that was played in the training montage and barely heard.  The closing song Kings Never Die, also by Eminem with Gwen Stefani, was the one we actually heard but not the one touted.

Southpaw tries too hard to use the clichés it gives us to make us think it is in any way original or interesting.  It is neither.  The people involved in the film have talent.

Where it went we do not know.