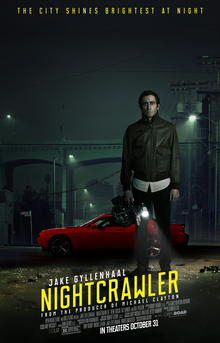 In the dark of the night, all sorts of strange creatures come out. The strangest may be the lead in Nightcrawler, an effective and haunting portrait of a soulless man in a soulless world.

Lou Bloom (Jake Gyllenhaal) scrounges a life in Los Angeles until he comes upon an accident, where he sees Joe Loder (Bill Paxton) filming the crash. Lou learns that there is money to be made in selling the footage to television news shows. He then dives into this world of "nightcrawling" in the hopes of making his fortune.

Easier said than done given his early stumbles. Lou soon gets some good footage, which he sells to eager news director Nina (Rene Russo) with the promise of more. He also hires Rick (Riz Ahmed), a man severely down on his luck, to be his assistant.

Lou does not shrink from unethical to illegal activities, such as altering crime scenes and even moving bodies if it will make for better footage. He also forces Nina into a relationship to keep his footage coming. Things come to a head when he gets to what appears is a home invasion with three dead before the police. His footage is graphic but also the perfect material for Sweeps Week. Now under the auspices of his "Video Production News", Lou calls the shots over Nina. He also wrangles his way out of dealing with the police, though at the cost of people's lives. 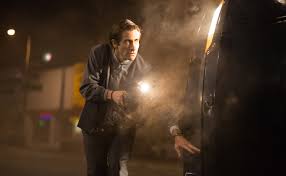 Nightcrawler paints a dark portrait of Lou, a man whose lack of empathy is cool and logical but sad and depressing. It may be that Lou has either Asperger's or ADHD given how cold, almost robotic he is. In his treatment of Rick and Nina, in how he can record people dying in front of him, Lou has no compassion.

I'm going to walk back a bit from an Asperger's/ADHD diagnosis. Lou is closer to an amoral being, someone who cares only about himself. It is doubtful that he does not know right from wrong (the film starts with him stealing material to sell for scrap and we see that he held on to the watch he beat a security guard for).

Jake Gyllenhaal gives perhaps his best performance as Lou. We see him as a gaunt, hollowed out man, who uses people living or dying as commodities to serve his own needs and gains. He does not shrink from making Lou monstrous (such as when he films Loder's car accident which Lou more than likely played a role in causing). He is cold to everyone, and we see Lou as monstrous and amoral at every turn.

His staccato delivery, his thin, almost crumbling physicality, the blankness behind the eyes all contribute to making Lou a figure of horror. "I can't jeopardize my company's success to retain an untrustworthy employee," he calmly tells Rick as the latter nears his end. Gyllenhaal does not build up this moment. He does not deliver this line with glee or a villain's cackle. Instead, it is delivered in a remote, cold manner, matter-of-fact, aware of the logic and perhaps aware of the cruelty. It is a chilling yet mesmerizing performance. 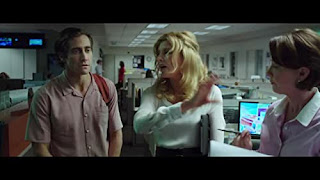 Gyllenhaal is matched by the two other main characters. Russo is equally cold but rational as Nina, the woman who feeds the public's need for sensationalistic stories. One of her last scenes with Lou where they negotiate terms for Lou's footage of a police shootout he essentially engineered plays out almost like a seduction scene. Russo has a breathless manner to her delivery, as if she and Lou are coming close to making love (Nightcrawler strongly suggests Lou had already pressured Nina into a sexual relationship to keep the footage coming). Nina is equally amoral, and Nightcrawler draws parallels between those filming death and those putting it out there.

Ahmed as Rick is equal to both Gyllenhaal and Russo. His Rick (who maintains a flawless American accent) comes across ostensibly as the most decent of the group, a man who needs a job so desperately he works with someone like Lou. However, even he can get sucked into pressuring Lou for an equal share of money despite his misgivings. To be fair, Rick had been wildly underpaid and very much abused by Lou for those months. However, it does not absolve him of being a participant, reluctant though he may have been.

The film also has a surprisingly strong electronic score from James Newton Howard.

Nightcrawler, written and directed by Dan Gilroy, is a solid film portraying a man taking advantage of a cruel market. With excellent performances, a strong script and firm direction, Nightcrawler is a film that is haunting and effective, a portrait of a dark man living of society's dark side.