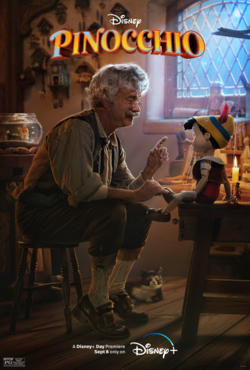 The Disney Vault continues to be raided as a way to keep Disney Dollars flowing in. I do not know if it signifies a naked cash grab, a dearth of creativity at the House of Mouse or a mix. I do know that Pinocchio, the latest animated-to-live-action adaptation, is a sad thing to experience.

Riding on the coattails of the original, we have Jiminy Cricket (Joseph Gordon-Levitt) coming into the home of clockmaker Geppetto (Tom Hanks). He creates a little puppet to essentially replace his son whom I assume is dead. Geppetto's wish to make his new puppet Pinocchio a real boy gets answered by The Blue Fairy (Cynthia Erivo), who gives Pinocchio life but keeps his as a puppet. To be a real boy, he has to earn that, with Jiminy Cricket now appointed his conscience.

Geppetto is thrilled to have a son back and sends him off to school. The naïve Pinocchio, however, has temptations via the fox Honest John (Keegan-Michael Key) who tells him that he should take to the stage. He eventually joins the traveling show of Stromboli (Giuseppe Battiston), who treats Pinocchio cruelly. Pinocchio escapes thanks to Fabiana (Kyanne Lamaya), a Stromboli puppeteer and her puppet Sabina (Jaquita Ta'le).

Pinocchio now has to find Geppetto, who in turn has gone looking for him. Their searches intertwine with a visit to Pleasure Island (where bad children meet a donkey's end) and facing off against the sea monster Monstro. Will they all survive? Will Pinocchio become a real boy? 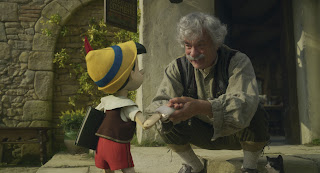 The answer to the second is a firm "No", one of the many poor changes and choices screenwriters Chris Weitz and Robert Zemekis (with the latter directing) made. You go through this journey with Pinocchio and end up with nothing.

I simply do not know who Pinocchio was made for. It was not made for those who love the original 1940 version. Pinocchio wants to have its cake and eat it too. On one hand, it veers very close to the original by keeping most of that story intact. The luring by Honest John, the Stromboli tour, the visit to Pleasure Island, Monstro.

On the other, the changes it made to the original do not help or enhance it. On the contrary, they seem to come almost from a point of hate against the original. Honest John going on about how Pinocchio could be an "influencer" and suggesting he take the stage name of "Chris Pine" not only instantly dates the movie but comes across as dumb. Having Pinocchio escape Stromboli not through the intercession of The Blue Fairy but by a mix of Pinocchio deliberately lying and Fabiana/Sabina's help seems a slap in the face to what generations have grown up with.

To be fair, Sabina is a cute thing and the suggestions of romance between Sabina and Pinocchio are in their way charming. On the awful side of this though, you have two bad choices. First, you have Pinocchio deliberately tell lies to make his nose grow long enough for Jiminy to get the key. Second, you lose that sense of magic and genuine repentance for having lied. 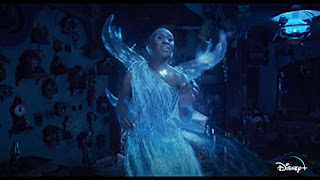 Now that I think of it, there is a third: the poor use of Cynthia Erivo. You are blessed with an extraordinary talent of a two-time Oscar nominee and relegate her to only one scene. Even worse, you prevent her from singing the entirety of When  You Wish Upon a Star, one of the most beautiful songs ever written for film.

It does not help that Zemekis directed Erivo to have some kind of rapid-fire delivery in the dialogue, almost as if she were in a screwball comedy.

Pinocchio has some new songs that are mixed with some of the original films. However, none of them were standouts and some had the opposite effect of being slightly cringe. Out of the four new songs, The Coachman to Pleasure Island is the best of them (and it is pretty bad). It feels so wrong for something that is I figure geared for families, too big and bombastic. For reasons that we probably will never know, Tom Hanks was given two songs: When He Was Here with Me and Pinocchio, Pinocchio.

Hanks is not a singer, so he opted for the Rex Harrison style of talking on pitch, where he speaks the song to a melody. Apropos of the poor sing-talking, starting Pinocchio with a mournful number about dead children might not have been the best idea.

I Will Always Dance, Sabina's number, probably captures what went so wildly wrong with Pinocchio. Mentions of salsa, tango, rumba and cha-cha again contemporizes the film. None of the new songs fit the setting or suggest a timeless quality. Instead, the songs and Alan Silvestri's score seem determined to make Pinocchio routine, soulless, lifeless. 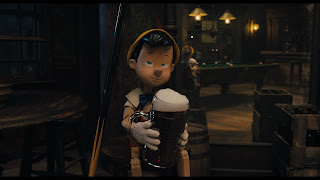 This contemporary feel is compounded by the dialogue and the actions. Seeing Pinocchio water-ski to Monstro and outrun him by using his feet like a motor is sad, just sad.

For those who thought Elvis was the worse Tom Hanks performance of 2022, you are in for a surprise. Tottering and slightly creepy, Hanks' Geppetto is apparently trying to channel Mark Twain in looks. Erivo as I mentioned is wildly underused. It is curious that of all the voices, Lorraine Bracco as Sophia the Seagull is the most recognizable. To be fair, Joseph Gordon-Levitt is unrecognizable as Jiminy Cricket, though the dialogue did not help him.

As a side note, how did Jiminy Cricket survive being put in a glass jar for hours with suffocating (another change that did not work)?

Lamaya was charming as Fabina but like Erivo underused. Evans was having a ball as the Coachman who also dressed up like a carnival barker on Pleasure Island. He seems to be the go-to man for Disney musical live-action remakes and is a great talent. Still, there was not much there for him.

I will concede that the Pleasure Island sequence was quite impressive-looking and Pinocchio himself looked nice. However, the positives are few and far between.

There is no point to Pinocchio. I do not think there has been much point to any of the Disney live-action remakes so far. It is just a shame, more so that given all both Pinocchio and the audience has been through, that he does not end up a real boy.