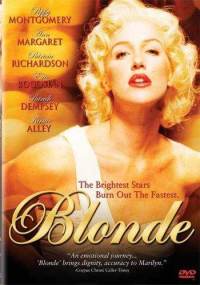 Before the Joyce Carol Oates novel Blonde was adapted into a Netflix film, there was a little-remembered miniseries. Another time there may be a comparison between the two adaptations, but for now let us look at the first adaption. Blonde is a well-acted adaptation that should be better remembered.

With many of the characters speaking directly to us including from the title character herself, Blonde tells a fictionalized version of the life and times of Marilyn Monroe (Poppy Montgomery). Blonde opens with a written statement: "Although the following film depicts some actual persons and events, it is a work of fiction".

We see Monroe almost beached on the shore, then go in chronological order from her childhood as Norma Jean Baker. Her mother Gladys (Patricia Richardson) informs us that her daughter's name came from two of her favorite stars: Norma Talmadge and Jean Harlow, and her surname from the husband she disliked the least. While her grandmother Della (Ann-Margret) tries to shield Norma Jean from Gladys' growing instability, she dies suddenly, causing Norma Jean great guilt.

Norma Jean is married off to Bucky (Niklaus Lange), a pleasant though sexist young man. Norma's beauty and ambition propel her to first a modeling then film career. Under the management of Mr. Shin (Wallace Shawn), the now-Marilyn Monroe starts gaining more film work. Shin, who is in love with his creation, dislikes her association with Cass (Patrick Dempsey) on both a personal and professional level.

As her star rises, Marilyn is wooed and lost by both The Baseball Player (Titus Welliver) and the Playwright (Griffin Dunne). Eventually, her affair with the President and her own emotional turmoil kill her at 36, her long-hoped dreams of motherhood unfulfilled. 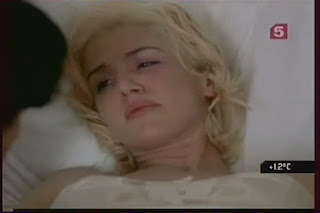 Blonde breaks the fourth wall quite often, almost to the point of parody. Most of the time these interviews work. Of particular note is when Montgomery as Monroe speaks to us. Montgomery stays away from a breathy, whispery speaking style that Monroe might have used in her films. Instead, this Marilyn was soft-spoken but also strong and sincere. It is only at the end when she bizarrely comments about the President's "Social Security men" in a strange Southern accent that Montgomery/Monroe comes across as bonkers.

Throughout Blonde, the Marilyn Monroe we see is capable, fully aware and an intellectual. Many times in Blonde does Monroe either quote or write poetry. Marilyn came across as caring, frightened and deeply mournful. She declines Shin's marriage proposal even if it would set her up financially for years, but also cries bitterly when she learns of his early death.

Other performances work well. Patricia Richardson, best known for the sitcom Home Improvement, was quite strong as Gladys both when in a somewhat catatonic state and when being glamorous as she speaks directly to the audience. Shawn too did well in drama as Shin, not in a comic manner but still with a lightness recognizable to Princess Bride fans. 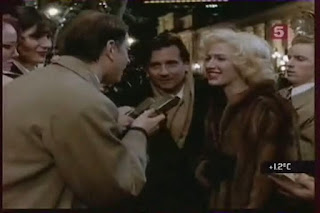 Other performances though could have been better. Dunne was almost blank when with Montgomery. When he mistakes the raspberry stains on Marilyn's dress for blood, he asks "Is that blood? Are you miscarrying?" in such a bored manner one almost thinks he is barely learning English. Oddly, he does better when being "interviewed". Dempsey is admittedly handsome but leaves little impact as what we are meant to understand was a great love in Monroe's life.

Jensen Ackles as Eddie G. (Edward G. Robinson, Jr.) leaves even less of an impression and in my view was miscast as the third party in this strange ménage a trois. Eric Bogosian as the sleazy photographer was one-note in his aggressive manner.

Blonde does well in moving things forward, though other elements seem odd. For example, when the Playwright finds Monroe at the foot of the stairs, it is unclear given her emotional state whether Monroe fell or threw herself. The miniseries also ends on, if not an ambiguous note at least a less depressing one, with her performing and a text telling us that she died without becoming a mother.

The miniseries played quite well as almost a biopic even if again Blonde is merely based on actual people versus being true-to-life. Well acted in particular by Montgomery and Richardson, Blonde is worth watching.