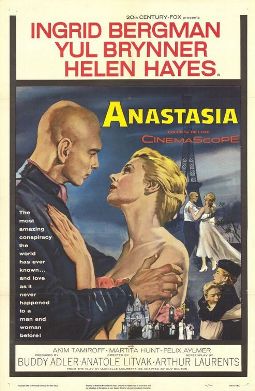 The myth of the Grand Duchess Anastasia, purported last surviving daughter of Czar Nicholas II, is tackled in Anastasia. Remembered more as the "comeback" film for Ingrid Bergman (and her subsequent Best Actress Oscar for the film), Anastasia is entertaining and efficient even if a bit stage bound.

A trio of Russian exiles are after a £10 million inheritance if they can find the true Grand Duchess Anastasia Nikolaevna. The leader, General Bounine (Yul Brynner) believes he has found the perfect woman for this scheme. She is "Anna Koreff" (Bergman), recently out of an asylum who once claimed to be the Grand Duchess while institutionalized.

Bounine, along with his conspirators Chernov (Akim Tamiroff) and Petrovin (Sasha Pitoeff) soon take the vulnerable woman under their wing, training and coaching her to pass her off as the lost daughter of the Czar. However, unlike other women they had used, something about Anna that makes her stand out.

She appears to recall more than what they have told her. She can be more forthright about her position. Can it be that these three have, through mere happenstance, found the actual Czar's daughter? Could Anastasia have indeed survived?

Anastasia's grandmother, the Dowager Empress (Helen Hayes) is not convinced, until she finally agrees to a private audience with the woman. Even then, once a ball is prepared to present Anna as Anastasia, affairs of the heart may complicate this mystery. Just as before, this woman disappears, and when her nephew Prince Paul (Ivan Desny) asks what she will tell those waiting for Anastasia's arrival, she replies, "The play is over. Go home".

There is more than a pun in the closing line. Anastasia cannot definitely answer whether Anna Koreff was the real Grand Duchess Anastasia. The film strongly suggests that she indeed was given the climatic reunion scene where the Dowager Empress recognizes in Anna her granddaughter's tic of coughing when she was nervous. However, Arthur Laurents' adaptation of the Marcelle Mauret and Guy Bolton play gives the Dowager Empress an out too. As she tearfully embraces her "granddaughter", the Dowager Empress also states that if she is not, she would rather not know or something to that effect.

The script is filled with witty lines, ably delivered by the cast. Tamiroff is close to comic relief in his flustered manner. "We're not doing this for art. We're doing this for money!" he exclaims when he sees how few emigres support Anna's cause. When the Dowager Empress chastises her lady-in-waiting over her flirtatious manner, she snorts, "To a woman of your age, sex should mean nothing but gender".

Anastasia is a showcase for Bergman, whose forced exile after the scandal over her affair with director Roberto Rossellini ended with this film. She brought Anna's vulnerability and quiet strength, mixing the confusion and agony of her life with a sense of hope that she might finally find her true self. There is a scene where she has to act with just her voice as she is speaking from another room. Bergman is able to convey the delight of her drunkenness while still seeming sensible. It is on the whole an excellent performance.

Hayes too was strong as the haughty yet wounded Dowager Empress, one who had been paraded a slew of impostors but still held out hope. Appropriately imperious but also capable of warmth, Hayes brought that theatricality to the screen well.

Brynner was more hit-and-miss. He struck me as too all-business to make any potential romance between Boudine and Anna plausible. I did not see a softening of Boudine, but a man driven by recognition more than money. Yes, he wanted to money, but he did not seem obsessed with it. Rather, Brynner made it look like Boudine just wanted to prove he could do it for his own amusement.

I would not say Yul Brynner was a weak link, but he was so abrupt with everyone it seems to strange to think he could fall in love with his own creation.

Overall though, Anastasia flows well and is strong entertainment. The mystery of Anastasia has been resolved long after everyone involved in Anastasia has passed. However, is it not amusing to think that the "real" Anastasia might have lived to see her own story brought to life in this way? More than one resurrection for Anastasia.