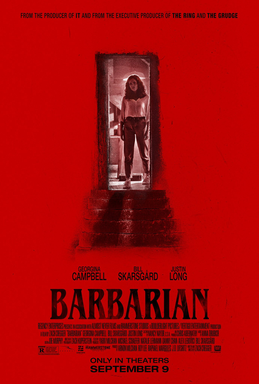 Do people watch a film just to watch something? Barbarian is not a good movie, certainly not a great one. I doubt I would call it "entertaining". However, I did not hate it. Instead, I just accepted that Barbarian is nonsensical and trashy.

An apparent double booking between Airbnb and HomeAway puts aspiring documentary production assistant Tess (Georgina Campbell) and jazz musician Keith (Bill Skarsgard) together in a small Detroit house. Tess finds the neighborhood not the safest, but apparently the mean streets of Detroit are safer than the house's basement. Something lurks beneath the basement and subbasements, something unholy, something that got Keith killed.

At this point, I'll stop to wonder why Detroit being unsafe struck Tess as surprising, but I digress.

An abrupt shift now takes us two weeks later to sunny L.A. and A.J. Gilbride (Justin Long), a television star whose new show may be scuttled due to rape accusations. In need of quick cash, he goes to his hometown of Detroit to see if he can dispose of some real estate. One of his holdings is the house Tess and Keith were renting. A.J. also finds the myriad of basement space and sees this as a selling point.

He also finds a still shell-shocked Tess and "Mother", a hideous creature that has a baby obsession and that had killed Keith. Now, with a second segway into the Reagan years to tell "Mother's" backstory, A.J. and Tess must fight to live out this night of terrors. 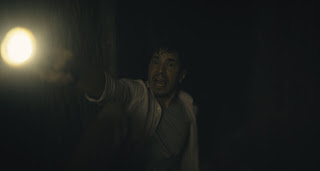 Ah, those pesky points of logic. Perhaps I should not question why, after two weeks, no one has noted both Tess' and Keith's disappearance. After all, this is Detroit, where calling the police will get you no response. We can question why Tess and Keith opted to be so cheap as to stay in a sordid Detroit neighborhood versus say something safer and cleaner, like a Motel 6 or Super 8. We can question why A.J. would pretty much drunkenly confess to at the very minimum pressuring his Chip on His Shoulder pilot costar into sex. "It took some convincing," he tells a friend while at a bar, which does not sound good at all.

And we haven't even gotten into the finale, which involves water towers, falling people and eye gouging.

Looking back at Barbarian, writer/director Zach Cregger wanted to simultaneously shock the viewer and hit familiar horror beats. It is unfortunate that in doing the latter, he made the former pretty muddled. You cannot have someone say, "She ain't never been in here" and not expect her to pop out at that precise moment.

Barbarian is not stretching in terms of film or horror, but I cannot fault it for achieving its goal of aiming low. 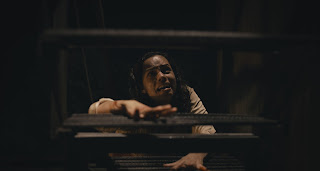 One of the major issues with Barbarian is how it seems to abruptly go from one point to the other. We go from this horror inside the house and jump straight to California. Granted, the two stories do end up together but it feels unnecessarily abrupt.

It also asks more questions, such as how is A.J. connected to this house.

The acting is bad. Skarsgard and Campbell looked blank and very stiff individually. Together they were worse. I do not know if Barbarian was hinting at a potential Keith/Tess romance, but if it was, it must have been from a whole other draft. Justin Long felt better when attempting to make Barbarian into a drama about a man whose career was crumbling by his own hands. Once he got into the house of horrors, it felt he shifted to another film altogether.

Barbarian is not a great film. Moments of unintentional comedy, especially what was meant as a climatic finale, wrecked what might have been better. Despite or perhaps because of this, Barbarian is not a film I ended up hating. It's too silly to hate. Bad it may be, predictable even, with some bad performances. I think though, as I am more removed from when I saw Barbarian, I can find it dumb but harmless.