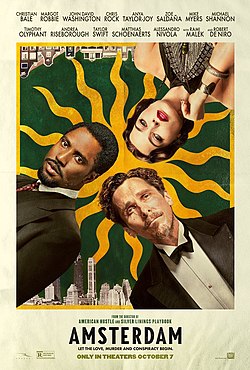 AMSTERDAM
Amsterdam touts itself as both a comedy and historic film with its opening on-screen text: "A lot of this really happened". If so, then history must be really dull and nonsensical. Simultaneously frantic and lethargic, Amsterdam thinks it is fun and zippy when it achieves only one thing: embarrassing everyone involved.
Hopping almost manically from 1933 to 1918 and back again, we see three people thrown together by World War I. There's Doctor Burt Berendsen (Christian Bale), who is not eager to be there put was pushed into it by his social-climbing wife and in-laws. There's Harold Woodman (John David Washington), a black soldier who won't tolerate discrimination against his fellow African-American soldiers. Berendsen, made commander of this group of troops, is injured alongside them.
At the hospital, they both meet Valerie Voze (Margot Robbie), a French nurse who is actually American. The three bond and share an idyllic time in Amsterdam despite Woodman and Berendsen's injuries (the latter with a glass eye), where Valerie and Harold begin a romance.
Burt and Harold find themselves caught up in the murder of Liz Meekins (Taylor Swift), a Senator's daughter who asked Berendsen to perform an autopsy on her father. She is convinced it was murder, part of a plot to overthrow President Franklin D. Roosevelt and install a fascist dictatorship. Burt and Harold, along with Valerie (a surrealist artist who is now back in America) must clear their names of the crime. That means dealing with Valerie's frenemies Henry Norcross (Michael Shannon) and Paul Canterbury (Mike Myers), American and British spies whom Valerie knows. It also means dealing with Valerie's brother Tom (Rami Malek) and his wife Libby (Anya Taylor-Joy).
The planned coup d'état revolves around General Dillenbeck (Robert DeNiro), who is to be the unwitting stooge to a cabal of industrialists bent on world domination. Things reach a climax at the military reunion, where attempted murders and conspiracies are exposed. 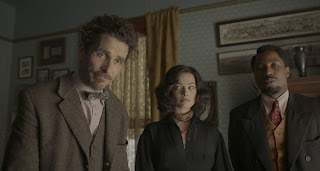 Writer/director David O. Russell is a good filmmaker. The cast is comprised of talented actors (three Oscar winners, two nominees). This collection of talents only makes the fiasco of Amsterdam harder to bear. As I watched, it was clear that everyone involved thought Amsterdam was clever and funny and even insightful about current-day situations. Whatever allegories between the little-known "Business Plot" of 1933 and such things as January 6 went over my head.
What did not go over my head were the simply frightful performances. They did not compliment each other but instead were in conflict with each other. The tones of the three leads are a clear example. Bale acted as though Amsterdam was a Borscht Belt skit on acid. His performance was essentially that of a Jackie Mason impersonator, all rapid-fire line delivery and hand movements. At certain points when Bale was bemoaning life with his wife Beatrice (Andrea Riseborough), I thought we was going to exclaim, "Take my wife...PLEASE!"
Washington in turn was the complete opposite: stoic to the point of comatose. Perhaps he figured that Bale was sucking the air out the room with his non-kosher hamminess, so he opted to be too serious. If Bale thought Amsterdam was a rapid-fire comedy, Washington thought Amsterdam was a esoteric drama. Both style, fighting with each other, made it impossible to believe Burt and Harold were BFFs.
Robbie was stuck in the middle, unsure of which direction to go. Perhaps finding it hard to match either tone, she straddled both and left no mark. Unable to control Bale's almost-crazed manner or lift Washington to play along (even with a romance that fell flat), Robbie was given a thankless job. I think she did the best she could under the circumstances, but she simply could not compete. 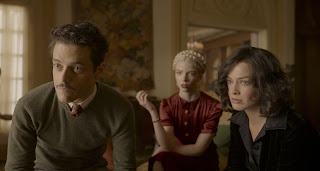 Amsterdam was long and meandering, with elements that seemed thrown in but never having a payoff. The entire subplot of Canterbury and Norcross' ornithological explorations was random. By the time we get to the alleged conspiracy to overthrow the government, it seems almost an afterthought versus what I figure is the main point of the film. The two cops who go after Burt and Harold appear to give them a free hand. Granted, it is because one of them served with Burt and I think supplies him with drugs, but it still seems bizarre that the junior cop did not say or do anything.
The other actors seemed to just be there. Malek and Taylor-Joy were nonentities in things. Only DeNiro seemed to take a stab at making things serious, but he too had some mugging. Taylor Swift was not on screen long enough to leave an impression (though the car running over her left an impression on her). I have heard people literally applauded when she was run over, though that did not happen when I saw the film. As with Harry Styles in Don't Worry Darling, you cannot throw a pop star into a movie and expect a transformative cinematic performance.
In her defense, Amsterdam obviously made a mockery of established, well-trained and talented actors, so Tay-Tay already started out ten steps behind. If people like Bale, Robbie and DeNiro could not make Amsterdam work, how could T-Swift do better?
Russell's script is already confused about what Amsterdam wanted to be. It made the cardinal sin though of sounding too contemporary for a film set in the Great Depression. People talk about being on "the right side of history" and "living your truth", expressions that I do not think existed in the 1930's. Granted, those are the script's minor issues, but they are issues nonetheless.
I think Amsterdam (a city that was not a major part of the film or story) is one of the biggest disappointments of the year. Rushed and dull, excessively long for the story it is not telling, one can only damn Amsterdam.
DECISION: D+
Posted by Rick at 10:47 AM