I imagine that the people behind the remake of the animated film version of Beauty and the Beast really did, in their heart of hearts, have the best of intentions. Yes, the Disney Corporation has been raiding their fabled Disney Vault and remaking their animated catalog into live-action versions because, reasons. There has been something predatory about how Disney remakes old films, many already established and beloved classics, and throws them at audiences willing to watch the same thing because people are in them. While Beauty and the Beast is at times pretty to look at, there is a hollowness, a sadness to it all.

In Ancient Regime France, an enchantress has cursed a vain prince and his servants to be a beast and inanimate objects respectively. Many years later, a bookish girl named Belle (Emma Watson) yearns for a life far from the provincial world she lives in. She also longs to stay far but very far away from self-proclaimed hunk Gaston (Luke Evans). Gaston has got it into his thick head that Belle is the ideal wife, even if he is oblivious to the googly eyes of his faithful Sancho Panza, LeFou (Josh Gad).

Belle's father Maurice (Kevin Kline) goes on business but ends up at the now-forgotten Beast's palace. He eventually flees after seeing a talking teacup, but when attempting to take a rose for Belle, he is captured by the Beast (Dan Stevens). Belle, alarmed by Maurice's horse arriving alone, goes and takes her father's place. Maurice cannot get anyone to believe his wild story, though Gaston sees it as a way to get Maurice to agree to a marriage.

As Belle and the Beast attempt to negotiate their lives, both begin to soften towards the other. The palace servants, such as the uptight clock Cogsworth (Ian McKellen), the suave candelabra Lumiere (Ewan McGregor), the kindly teapot Mrs. Potts (Emma Thompson) and wardrobe Madame de Garderobe (Audra McDonald) all conspire to help the blossoming romance. Granted, they have ulterior motives: only when the Beast can love and be loved in return can the spell be broken. However, it is now a race to create this magic moment, for the Beast has until when the last rose petal the enchantress gave the Beast falls. Will Belle and the Beast see something that was not there before? Will Gaston get his way? 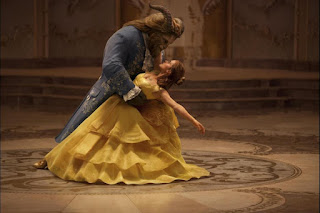 We've had live-action remakes of Cinderella, 101 Dalmatians, The Jungle Book, Pete's Dragon, Dumbo, this one, The Lion King, Aladdin, Pinocchio and the upcoming The Little Mermaid and Snow White. That is also not counting such films as Maleficent and its sequel Maleficent: Mistress of Evil plus Cruella, which are not strictly remakes but revolve around Disney villains. Still no word on whom they will cast as Basil of Baker Street for the inevitable The Great Mouse Detective live-action remake.

Most of the Disney live-action remakes (which have grown so plentiful they might as well be their own genre) follow a surprisingly similar route: stay very close to the original and only tweaking bits here and there. Beauty and the Beast follows this familiar route, but with continuing diminishing returns. The film aims to be distinct but in copying so much from the animated version, it is simply impossible. However, if it wants to be an almost shot-for-shot remake, why then bother?

Beauty and the Beast has what I call "forced frivolity", where we are told how happy everything is but it does come through on the screen. Instead, we get some scenes that are almost sad to watch. A good example is the Be Our Guest number. It was here that I first recognized Ewan McGregor's voice, and while he is capable of singing, there was no true joie de vivre coming from the number. Instead, if felt sluggish, almost creepy.

I think it comes from the fact that screenwriters Stephen Chbosky and Evan Spiliotopoulos were given very little leeway to find something new and original. They had to have the servants be objects just like in the animated version. However, the end results fail spectacularly. The clock and candelabra look off-putting and unnatural. Worse was Mrs. Potts, who looked like a face had literally been drawn onto a teapot. There was no warmth or sweetness communicated from the objects, because they were limited to being "real". 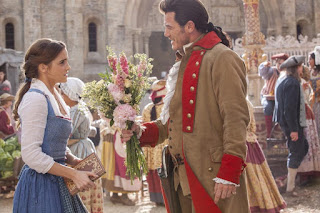 The few things the writers did change from the 1991 version were nonsensical and pointless. We got a Mr. Potts, who thanks to the spell forgot he had a wife and child. The enchantress essentially swept in after the last petal fell to bring the beauty behind the Beast to life. Even the "LeFou is gay!" bit was vague. For most of the film, LeFou was more fey than gay, with only the mildest hint at the end when a man cuts in to dance with him.

While Beauty and the Beast kept to most of the 1991 songs, the three new songs by Alan Menkin and Tim Rice are bland and forgettable. Two of them center around the Beast, with Evermore being a ballad sung by the Beast. The other Beast-centric number, Days in the Sun, appears to want to soften the Beast's character and make him sympathetic due to an unhappy childhood, a strange decision given he is meant to soften over time. I also got the sense that new lyrics were added to the songs, but if so I don't think it was an improvement.

For example, Gaston seems to be longer and with a strange section where LeFou cannot spell out "Gaston" because as he sing-talks, he is illiterate. I cannot remember for certain if that was part of the 1991 version, but I don't think it added anything either.

As if that was already not bad enough, the cast seems wildly out-of-place. Emma Watson looks more angry and hard as Belle, never displaying anything close to warmth. Moreover, her singing voice is frankly awful and harsh. Stevens too was not very good when singing, and not much better when in Beast mode.

McGregor and McKellen seem ill-suited for the Lumiere/Cogsworth double-act. They seem almost complete strangers in the film, making the idea of longtime association laughable. I thought that Cogsworth looked like Tik Tok from Return to Oz, but having seen Tik Tok, he looks worse. Emma Thompson, I think, did her best as Mrs. Potts, but couldn't quite get the sweet and motherly nature there.

Kevin Kline did do well as Maurice, a mix of eccentric and caring coming through. Luke Evans was hamming it up to the Nth degree as Gaston, and his voice was much stronger than Watson or just about anyone else save Audra McDonald. He went all-in on the himbo Gaston, so I give him credit for that.

Beauty and the Beast has some pretty-looking moments and nice costumes, but so much of it is uninteresting I genuinely wonder why anyone would prefer it over the original. To my mind, Beauty and the Beast was like seeing someone propping up a corpse.