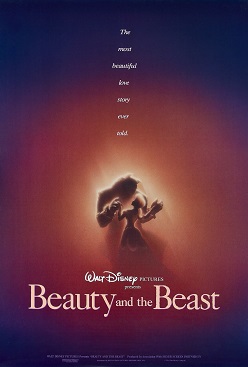 I remember Beauty and the Beast when it first came out.   It was at a critical time in animation, and in the fortunes of the Walt Disney Studios.  The vaunted Disney Renaissance was a hit-and-miss affair at this point.  The Little Mermaid was an unqualified success artistically and commercially, but the follow-up, The Rescuers Down Under, wasn't.  Beauty and the Beast would be make-or-break: would Disney really have a rebirth in its fortunes or was The Little Mermaid just a lucky break?

The tales of the death of Disney as an animation force to be reckoned with were greatly exaggerated.  Beauty and the Beast is one of the highlights of animation, a beautiful and tender story that still has the power to move the viewer emotionally, with a brilliant score and songs that not only hold up after over two decades but still have extraordinary elegance, charm, humor, wit, and grace.

A long time ago, a vain and selfish Prince was cursed by an enchantress who asked for shelter at his castle disguised as an old woman, offering a rose for payment.  Her curse extended throughout the castle affecting both the Prince and the servants.  The enchantress gives the now-Beast two items: a magic mirror which allows him to see anything in the world, and the rose, which is enchanted.  He has ten years to find someone to love and who will love him before the last petal falls, otherwise everyone will be cursed forever.  The Beast, convinced no one will love him due to his hideous form, locks himself away within his castle, shutting himself off from the world.

Many years later, a father and daughter take root in a village.  Belle (Page O'Hara), daughter to inventor Maurice (Rex Everhart), loves her father, but she is different from all the other girls.  Bookish and intellectual, she longs for adventure and knowledge.  She wants to find her own Prince Charming, but she is content to be with her father and her beloved books.

Belle certainly has no interest in the village hunk, the vain and brutish Gaston (Richard White), a master huntsman whom all the women love.  Gaston, for his part, has decided Belle will be his bride (her opinion on the matter being irrelevant).  Belle does her best to put Gaston off, but Gaston is determined to get at her.  Maurice goes off to another village to present his latest invention, a woodchopping machine, but gets lost in the forest.  He takes refuge at the Beast's castle, unaware of its history.  He is attended by the castle's staff: Lumiere (Jerry Orbach), a candelabra who has a bon vivant personality, Cogsworth (David Odgen Stiers), a stuffy clock, and Miss Potts (Angela Lansbury), a cheerful teapot.  However, an enraged Beast (Robbie Benson) locks Maurice.

When Philippe, Maurice's horse, returns in a panic to their home, Belle is alarmed.  Belle goes to the castle, and offers herself in exchange for her father.  The Beast's one condition: she must stay there forever, and Belle reluctantly agrees.  Maurice attempts to get the village to help mount a rescue, but no one believes.  However, Maurice's ramblings give Gaston something he rarely has: an idea.  If he gets Maurice locked up in an asylum, he will use his influence to release him...if Belle agrees to marry him.

Belle is heartbroken at this turn of events, but the servants know she could be the one to break the spell.  However, things are difficult given how Beast behaves: brutish, uncouth, and unpleasant.  However, with some coaxing and coaching from the servants, Beast's more gentle side emerges.  The real change occurs when Belle flees in terror after going to the West Wing, the one area of the castle forbidden to her.  An enraged Beast terrorizes her when she sees the mirror and dying rose, but he then rescues her from wolves.

In time, they soon start seeing the other as good, even friends.  Beast shows himself to be a kind being, but after an enchanted night together Belle confesses she misses her father.  In an act of self-sacrifice, Beast allows her leave to go, giving her the magic mirror.  While he is sad to see her go, her happiness comes first in his mind.  She is happy to see her father again, explaining that Beast is different than how he and everyone might see him.  Belle is also surprised to see Chip (Bradley Michael Pierce), Mrs. Potts' son who is a teacup, who snuck into her bag.  However, something wicked this way comes in the form of Gaston and the head of the insane asylum.  She still refuses Gaston's marriage offer and presents the mirror to show Beast as a good being.  Gaston, enraged that Belle would prefer Beast over him, gets a mob to storm the castle.  The castle staff mounts a furious defense and defeat the mob, but Beast, too heartbroken to care, offers no defense when Gaston the hunter comes to hunt him down.  Beast rallies though, when he sees Belle has come back of her own free will to help him.  Gaston fatally injures Beast, but Gaston in turn falls into a deep abyss (presumably dying).  A heartbroken Belle tells Beast she loves him just as the final petal falls.  In a stunning turn of events, Beast is transformed to a human again, as are all the servants.

Both of them, seeing that true beauty lies within, marry and live happily ever after.

I freely admit that at the end of Beauty and the Beast, I shed a couple of tears.  I was intensely moved by the story (which itself moved rather quickly without being rushed).

A gigantic part of Beauty and the Beast's success comes in Alan Menken's music and Howard Ashman's lyrics.  The musical score is brilliant: dark or light when necessary.  Almost all the songs are excellent and do what good musicals should do: either move the plot or explore character.  We have the big opening number, Belle, which describes how Belle is so unusual in her world because unlike the other villagers (particularly women), she loves books and the world of knowledge.  Another number, Gaston, sung in a joint first and third-person, shows the arrogant, narcissistic side to our figure, a vain, prideful man for whom intellect is an aberration rather than an accomplishment.

The big three numbers most remembered though are the ones nominated for Best Original Song.  There's the aforementioned Belle, and there the big showstopping number Be Our Guest, where Lumiere gives Belle a grand banquet.  Be Our Guest (which Disney still uses to promote its theme parks, particularly its hotels and restaurants), is as lavish a musical number as Disney has had in an animated feature, freely, openly, and nakedly drawing from the big Busby Berkeley musicals of the 1930s.  It builds and builds until it becomes this massive visual spectacle, one so grand even the stuffy Cogsworth gets caught up in its extravagance.

As a side note, I'm nut sure Belle actually ate much if anything at this feast, but I can't argue with Be Our Guest's grand spectacle.  It's Disney by way of Ziegfeld.

As big and splashy as Be Our Guest is (and it certainly is unapologetically that), it is the third Oscar-nominated song (and eventual winner) that is the deepest and most beautiful of Beauty and the Beast's songs.  The title song is pure in its simplicity.


If you listen to Beauty and the Beast, you'll notice that it is a five-note melody, with the lyrics always fitting that five-note theme.  Even in the bridge, you have five notes, with the lyrics having five syllables.  Only in the beginning and end of the song do you have a sixth note, which is a downward note from the others.  However, the song's melody, soft and lush, evokes a tenderness, that of Belle and the Beast falling in love.

The only song that I think fell flat was Human Again, a song I did not remember, and with good reason.  It was not in the original film, but added in the Special Edition.  It was an OK song, but not one I thought was necessary or on the level of all the others.  I can see why it was cut from the original release and frankly it didn't add anything to the Special Edition.

In terms of performances Disney was wise to not cast 'big names' as either Belle or the Beast, as it allowed Page O'Hara and Robbie Benson to create characters that were believable and relatable.  There are names in the film, though Jerry Orbach is probably best known for Law & Order.  Still, his Maurice Chevalier-like Lumiere was delightful (especially when paired with the stuffy Stiers' Cogsworth).  Lansbury was wonderful as Mrs. Potts, a most understanding teapot of kindness.

Visually, the film is beautiful, a lush artwork to be appreciated time and time again.

Beauty and the Beast did something no other animated film had done: gotten even the stuffy Academy of Motion Picture Arts & Sciences' attention.  It was the first animated film to be nominated for Best Picture and remains the only traditional animated film to be so honored (both Up and Toy Story 3 being computer-animated).  Instead of giving it a special prize, the Academy recognized this to be a very special film.  Oh, the Oscars have made mistakes (Eddie Redmayne comes quickly to mind), but here, they were spot-on.

In short, Beauty and the Beast is a film that is a landmark achievement.  It is a 'tale as old as time', with songs 'as old as rhyme', which in this case mean they will live on forever.