Diamonds Are A Holmes' Best Friend...

Rip Off has a few things Elementary can be counted on: a strange crime, character explorations, and touches of humor.  It also has something missing: Joan Watson.  She has gone off to Copenhagen with her boyfriend Andrew, allowing us to see a rare episode where she isn't there to watch over Sherlock Holmes.  As a result, we see how Holmes and his new protégé, Kitty Winter, work together.  It's a sign of Elementary's strength that they got on quite well, giving us a new dynamic, not better than that between Holmes and Watson, but good nonetheless.

A severed hand has been found, and Detective Marcus Bell (Jon Michael Hill) calls upon Sherlock Holmes (Jonny Lee Miller) and Kitty (Ophelia Lovibond) to help out.  Holmes finds the rest of the corpse, which was dragged away to the impound station with no one noticing.  The hand is traced to Moshe Shapiro, an Orthodox Jew who owns a postal store whom we discover is also into diamond smuggling.  Holmes believes the victim's hand was deliberately ripped out of his body.  He comes to find the person who did the physical act (as it required someone of immense physical strength) and he zeroes in on Leonard Oosthuzien (Daniel Abeles), Moshe's South African diamond smuggling partner.  There appears to be some proof against Leonard, and we learn that he and Moshe had an altercation prior to his death.  We even learn that the killer had targeted three others who were witnesses to the fight, including Amit Hattengatti (Rafi Silver), his loyal employee.  Kitty, however, makes a connection that helps tie the case together.

In a subplot, Captain Gregson (Aidan Quinn) takes matters into his own hands when he learns that his daughter Hannah (Liza J. Bennett), who happens to be a cop herself, has been roughed up by her partner/'partner'.  This involves Captain Gregson punching out Hannah's partner in front of other cops, which angers Hannah and puts him in hot water.  With unexpected help from Kitty, the Captain not only mends fences but finds that the officer decides to quit the force. 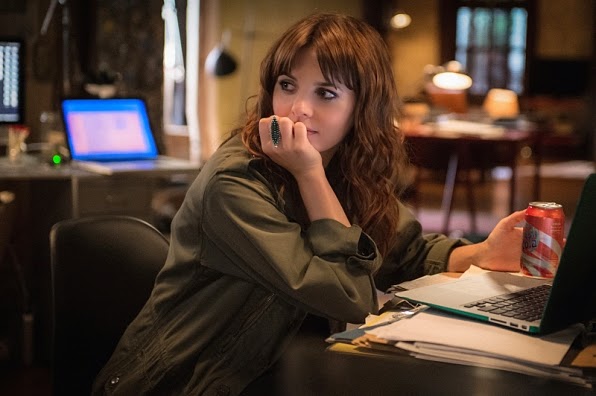 If anything, Rip Off is Kitty's hour, and Lovibond makes the most of her opportunity.   Her character started out as aloof, a bit hostile and standoffish.  As time has progressed though, I've warmed up to Kitty, seeing beyond both her remote figure or even the victim to being someone who, like Watson, doesn't stand for Holmes' foolishness.  A major plot point is Holmes' discovery of a book Watson was writing, The Casebook of Sherlock Holmes, which he finds on Watson's old laptop even after she had deleted it.  Kitty enjoys teasing him about the book, suggesting clues may be found there.  As Holmes at the end continues to go on about it, she takes matters into her own hands by pouring soda on the laptop, her way of telling him not only is she tired of his mournful narcissism, but to in effect take charge.

As a side note, I hope we do get a chance to see The Casebook of Sherlock Holmes sometime.

Kitty also proved herself to be a competent detective.  While not on the same level as Holmes (and let's face it, few are), Kitty was the one who saw a major clue that everyone missed which proved the key to solving the crime.  It was nice to see Kitty and Lovibond take center stage and show that while she is no Watson, she is also her own woman, capable of so much.

Miller continues to excel as Holmes, bringing humor into his prickly nature.  He can get through quips easily.  When commenting on The Casebook, Holmes I think says he will talk to Watson after she returns from what he called her "Danish sabbatical/sexcapade".  He also has a ready answer for when Kitty wonders whether the non-disclosure agreement he made her sign is a sign of paranoia.  "Paranoia is the byproduct of being consistently right".

Words to live by.

Miller also reveals more of Holmes' ego when he comments about The Casebook of Sherlock Holmes.  "Subject matter is interesting, but her prose is prosaic," he remarks.  In his performance, JLM also shows that his concerns about The Casebook may be less about his cases and methods and more about whether someone is observing him and rendering judgment.  He is now the one being studied, and I think this terrifies him in some way.  Rip Off plays on this excellently.

I compliment Jason Tracy on writing a script that does take a few turns case-wise, presenting us with a suspect that is and isn't obvious at the same time.  There are a few questions I have on the case, like how no one noticed the body beforehand (no pun intended).

Another major issue is the Gregson family storyline.   As far as I know, this is the first time we've seen Gregson's daughter as a fellow officer.  While it is a good idea to introduce this character who may play a greater role in this or future seasons, I think the actual introduction and issues of domestic violence were kind of thrown in there.  I think the introduction could have been stronger and the conflict grow over the episode rather than just throw us all in there right at the get-go.  It doesn't allow for drama to build, to see Gregson think as a father and not a Captain.  This isn't Quinn's fault, who looks like he's been starved to be something other than Holmes' entry into crime (which if you think about it, he really doesn't have to be).

Still, given what we had, Rip Off works so well on so many levels.  It has a good case, great character work, moments of humor (I never knew British Arm Wrestling could be so funny), and an overall satisfactory hour.

Oh yes...did I mention CLYDE! pops up again?  He's the real Elementary Icon, and any Elementary episode that includes him will almost always get a few points...