This year, the Academy of Motion Picture Arts & Sciences opted to break up the presentations of Live Action and Animated Shorts to two night presentations.  I was able to see only the live-action shorts.  I now give brief reviews for the five nominated shorts.

First, a brief recap.  The shortest nominated film was Boogaloo & Graham at 14 minutes, the longest was Aya at 39 minutes.  Two of them, The Phone Call and Boogaloo & Graham, are in English, and Aya is primarily in English though an Israeli film with a lot of Hebrew in it.  As Boogaloo & Graham is set in Northern Ireland, the children's thick accents required the use of subtitles.  The other two nominees, Parvaneh and Butter Lamp, are in a mix of languages.

Here are short reviews for each, presented in the order they were shown.

Parvaneh is an Afghan refugee working in Switzerland.  She hears at her work of a fantastic place from which she can send money to her family, a place known as "Western Union".  However, because she has no ID, she can't use Western Union.  For that, she needs a citizen.  She finds Emily, who can help, for 10% of what Parvaneh has.  However, she has to get her own ID, and by the time she and Parvaneh get back to the WU it is closed.  Emily, who now feels genuinely bad, offers Parvaneh  shelter for the night and a night on the town, something the devout Muslim doesn't do.  As the night progresses, Parvaneh does go to a club, does let her hair down, takes sips of alcohol (though she is not aware what exactly this odd punch is), and is nearly violated.  Emily defends her and gets her money back after the thug took it.  Once the sun is up, Emily and Parvaneh become friends, appreciating what the other has: peace in one, freedom in another.  The money is sent, with Emily returning her 10%.   Parvaneh returns to her shelter, a sad parting for both.

I appreciate that Parvaneh is shown as a good person, respectful of her faith while still slowly and innocently slipping into the ways of the West.  Parvaneh is a sweet story, but I would argue that very little actually happens.  It would benefit from being perhaps a feature-length film where we could explore the relationship between Parvaneh and Emily. 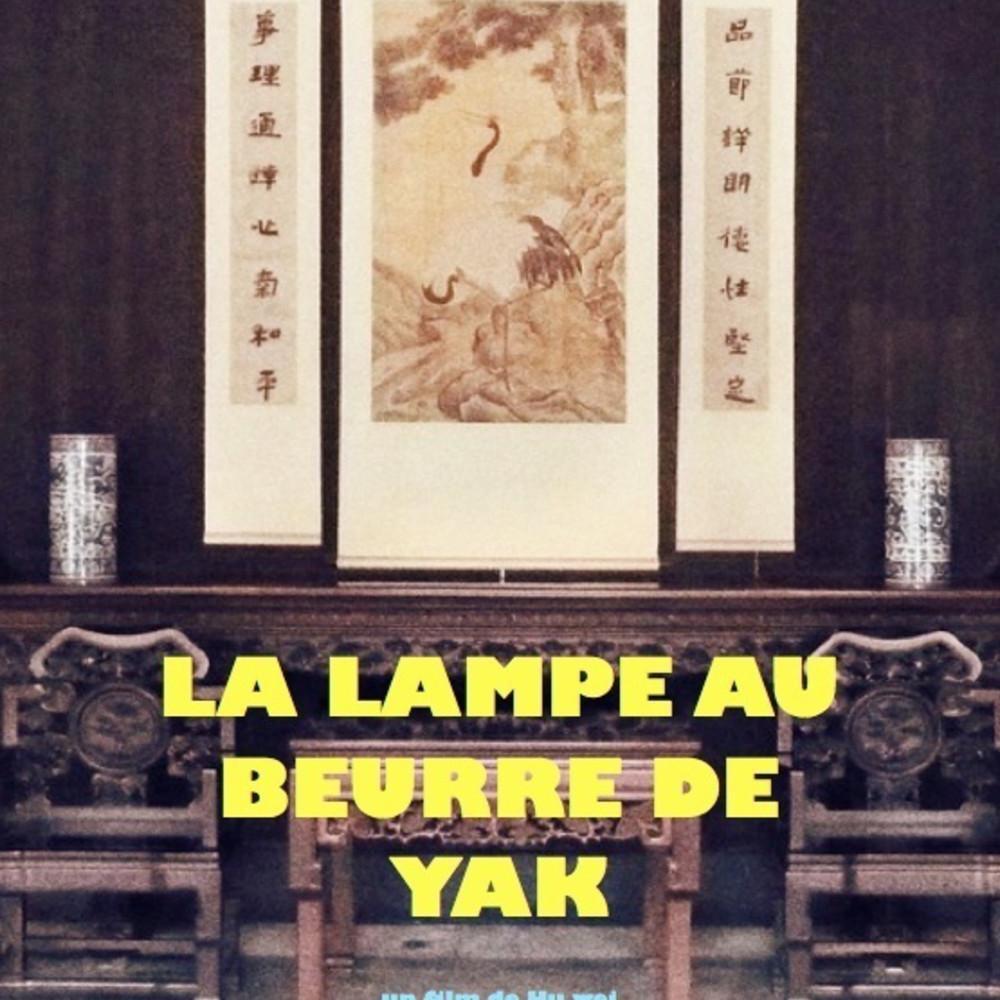 Butter Lamp is a story of a photographer in Tibet, taking various pictures of people as they pose with all sorts of backgrounds.  Most backgrounds are meant to compliment the subjects, with varying degrees of humor.  In one instance, an old Tibetan woman who has never been photographed is given a Potala Palace backdrop.  Unaware that it isn't THE Potala Palace, she begins prostrating herself in front of the background.  The photographers can't stop her until they alter the background, leaving her slightly confused.

The photographers are doing this as part of the New Socialist Campaign, and as they get ready to leave, a surly young man who had refused to take his traditional Tibetan coat for a more contemporary jacket, asks the photographers to deliver an offering of buttermilk to the actual Potala Palace as an offering for his late mother.  They agree and tell each other to get the buttermilk as they pull up stakes, where we see the background has been covering the construction of a new high-speed rail, another sign of the influx of the Chinese into Tibet.

Again, Butter Lamp is a film where very little happens.  It might even been seen as a series of vignettes on contemporary Tibet, where the struggle between maintaining traditional culture and the growing power of the Chinese.  We do get involved with some of the stories (a marriage photo that gets improved with the surprise appearance of the mayor's motorbike), and the family dynamics are interesting to watch; while it was a nice film but again, not much actually happens. 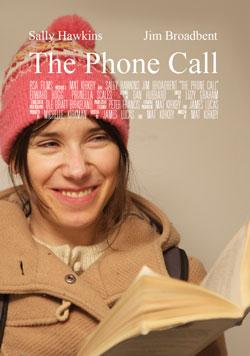 The Phone Call is about Heather (Sally Hawkins), a phone operator at a suicide hotline.  It's not a busy office (there are only two people there, counting Heather), with the other employee on the phone on non-business business.  The person at the other end of the line is Stanley (Jim Broadbent), who tells Heather he's taken an overdose of pills.  He's distraught over the recent death of his wife Joan, who is now buried with their daughter Molly.  Heather does her best to get Stanley to tell her what pills and call for rescue, but he won't.  Eventually, we find Stanley is dead, with Heather not being able to do anything about it.

What is fascinating about The Phone Call (apart from the fact that you have both an Oscar winner and Oscar nominee appearing in a short film, I figure the British are less hung up about things like that than Americans) is that the film really depends on one person, and that's Hawkins.  Broadbent's performance is only audio, as he never appears on-camera.  He still manages to evoke such emotion as the heartbroken Stanley, who is determined to end it all after some terrible struggles.  Hawkins has to carry the brunt of the film, where she has to evoke the horror and tragedy of a suicide she knows is happening, the pain she hears, but which she can do nothing about.  It really is a wonderful albeit sad film.

Aya (Sarah Adler) is a young woman waiting for someone at Ben Gurion Airport.  Due to circumstances beyond her control, she is left holding a sign for a Mr. Overby, who is going to go to the Arthur Rubenstein Music Festival as a judge.  Mr. Overby (Ulrich Thomsen) arrives, and mistakes Aya for his driver.  She decides to drive Overby but doesn't inform him right off that she doesn't know where the Rubenstein Festival is, let alone she isn't his driver.  Over the very long drive to Jerusalem, they have a conversation, and what is a romantic moment he plays a piano piece on her leg.

Eventually, she drops him off at his hotel, and he invites her to dinner.  She says she'll look for parking, but opts instead to go home, to her husband and child.

I frankly found Aya a bit boring, with the only thing that I learned was that the distance between Ben Gurion and Jerusalem must be an extremely long one because the actual drive felt indeterminable.  The piano playing moment was nice and subtle, but I didn't understand why Aya went along with all this.  Why couldn't she just say "I'm not your driver, let's page him or contact the company that hired him".  Her long drive was puzzling to me, and I really didn't care all that much about either of them.

Belfast, 1978, the height of "The Troubles", where the British and their Ulster allies are battling the Catholic native Irish population in Northern Ireland.  Two brothers, Jamesy (Riley Hamilton) and Malachy (Aaron Lynch) are living this world, and their father, a bit of a ne'er-do-well, brings two baby chicks, whom the brothers name Boogaloo & Graham.  They soon become totally enraptured with their chickens: they walk them on leashes, declare themselves vegetarians, and dream of growing up to raise chickens.  Their mother would rather get rid of the dirty birds, and with the news of her pregnancy the parents decide it's time to say goodbye to Boogaloo and Graham.  The boys are horrified and hysterical at the potential loss of their friends, and in a desperate move decide to run away with the birds.  When they do leave, they inadvertently run into a patrol that is pursuing an IRA fighter.  Dad comes just in time to shield them from the incident, where the IRA fighter is merely arrested.  Realizing just how important the birds are for the boys, he wants to keep them but the mother still wants to get ride of them.  However, the discovery of eggs convinces the mother to keep the birds.  We learn through the narration of one of the brothers that their father had secretly been placing an egg in the nest to keep the charade going.

I was so moved by Boogaloo & Graham.  In those fourteen minutes we see the sweetness of the boys as they latch onto the birds.  They genuinely care about them in the way children do, a touch of innocence in the tough and conflict-plagued streets of Belfast.  In the world where violence and bitterness rule, these two boys' gentle love for their odd pets is a sign of how children are better people than adults.  Oddly, the Troubles play virtually no part in Boogaloo & Graham, focusing more on the boys than on the world outside.  This was a brilliant decision, because when we do get the Troubles thrust at us, it comes as a shock, having a greater impact.  It is a really sweet story done well, one that sticks with you and that while good as a feature film, I think is practically perfect at the length it is in.

Now, I think the winner, The Phone Call, is a brilliant film and worthy of the win.  However, my heart favors Boogaloo & Graham, and think it would have made for a worthy upset winner (the odds were with The Phone Call).  I would not have nominated Aya, and both Parvaneh and Butter Lamp were good but a bit unspectacular (though I prefer Parvaneh and think would make a good feature-length film).

How I'd rank them:

I again call on the Academy to give these short films more exposure beyond a one-night joint screening.  Why are we treated to Maria Menounos' ads for ads but denied these good films?  My view?

Film companies are either too scared or think we're too stupid to understand short films.