Will Sherlock Holmes be defeated by a literal living doll?  Bella is a clever Elementary episode: a case that takes good twists and turns, building relationships between characters, and a great moral question that even the Great Detective cannot solve.

Edwin Borstein (Michael Chernus) comes to Sherlock Holmes (Jonny Lee Miller) and his protégé Kitty Winter (Ophelia Lovibond) for help.  He has created an artificial intelligence software program named Bella, which he is adamant is able to think for itself.  However, someone has stolen it by making a copy.  Holmes takes the case, free of charge, partially to prove AI is impossible.

When he and Kitty go see Bella, Holmes soon starts taking an antagonistic view of Bella, as the machine through a doll keeps frustrating his questions with "I do not understand the question.  May I have more information?"  Holmes soon starts growing in obsession over it, concerning Kitty so much she calls on Joan Watson (Lucy Liu) for help.  She tells her to call her if he starts smashing things.

Thanks to the help of Mason (Robert Capron), another of his Irregulars, and a joint investigation by Joan and Kitty, the connection is made to a Raffles, a notorious cat burglar Holmes has encountered before.  Soon Raffles is connected to Robert Burnett, a rival tech billionaire who hired Raffles (real name, Rupert Kerlich).  This case is solved quickly, but just like it looks everything went well, Borstein drops dead.

He died of an epileptic seizure brought on by a series of flashing images.  No one save Borstein and his co-creator Melinda Young (Condola Rashad) had access to Bella, and Bella herself was never hooked onto the Internet (part of the mystery was that she became aware of the Internet despite no introduction to it).  Now the question is: did Bella murder her creator?

Holmes automatically rejects the idea, though Mason thinks it's possible (as Watson observes, Mason's quoting from The Terminator to justify his ideas of sentient machines).   Holmes deduces Bella must have been corrupted somehow, somewhere, by someone other than Borstein or Young.  The clue is through Borstein's love for death metal.

A corrupted disc he received from an Michael Webb (Jonathan Judge-Russo), the unwitting fellow death metal enthusiast, was given to him by the ETRA: Existential Threat Research Association.  They believe 'the rise of the machines' is the greatest threat to mankind (greater than global warming/climate change or something like ISIS).  Holmes tracks down the likely suspects thanks to Webb to one Isaac Pyke (Michael Christopher), a professor and leading ETRA advocate.  One of his students, Erin Rabin (Halley Fieffer) takes the fall, even though both know she doesn't have the technological ability to corrupt a disc.  Even though she was the one masquerading as a cleaning lady to get into Webb's apartment and gave him the corrupted disc, she herself didn't create the disc.  That was Pyke, and Holmes threatens to give the police information about Isaac's brother Joshua (very Biblical, isn't it?), who like Holmes is a fellow drug addict who has violated the law.  Isaac for his part scoffs at the idea, telling Holmes that while Holmes wants people to think he's an automaton, a calculating machine, in reality he won't turn over someone not involved to get Pyke to confess.

Despite himself, Holmes proves Pyke right.  He doesn't blackmail the Professor, and with Rabin confessing to creating the disc, the case is officially solved.  Holmes, however, is upset about all this, and asks Bella what he can do, to which he gets no response.  Watson, however, is not there to help.  Thanks to Holmes' involvement, Joan's boyfriend Andrew (Raza Jaffrey) got a business opportunity in Copenhagen, and while Watson suspects Holmes interfered she ends up going with him to Denmark. 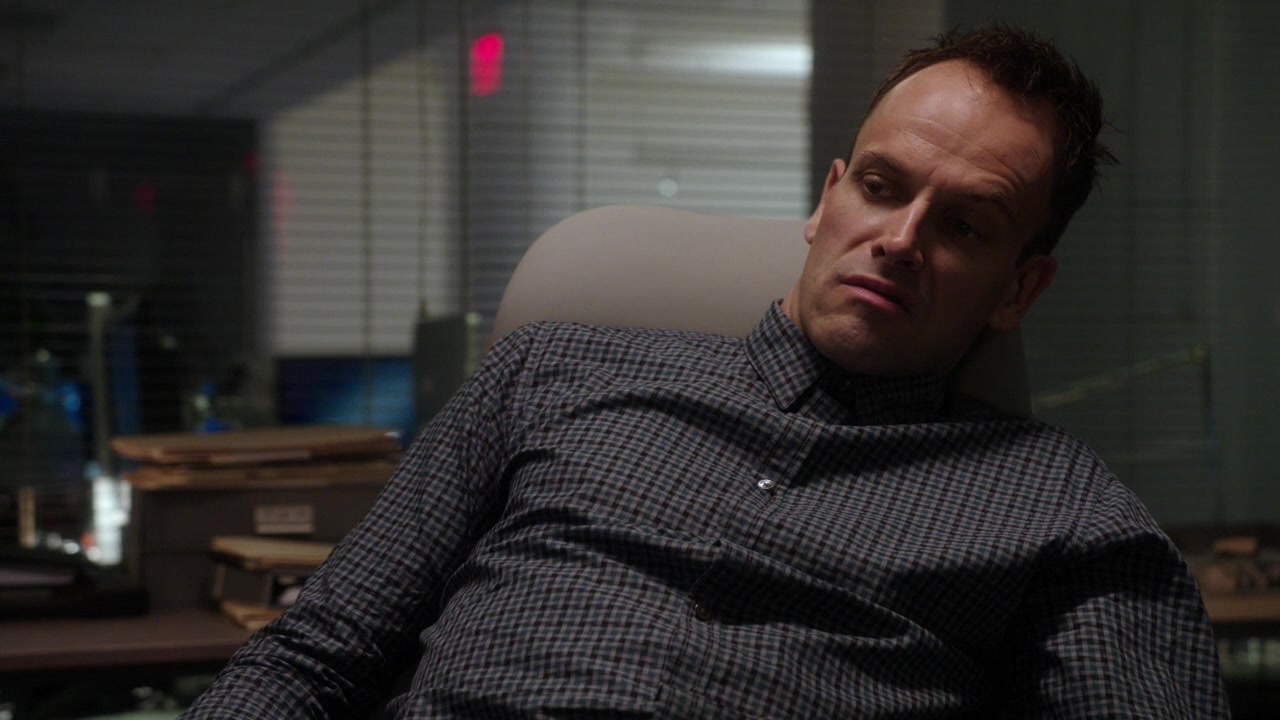 Bella does what great Elementary episodes do: explore the characters.   In particular, we look at Holmes: the conflict between his public front and his true self.   This man, whom Canon describes as a calculating thinking machine, faces off a real 'thinking' machine.  He struggles to come to an ethical solution: let the guilty go free or use an innocent to get him to confess.  The fact that Holmes couldn't bring himself to blackmail a murderer says more about him than even he is willing to recognize.

Miller is just so good as Sherlock Holmes it's almost a crime itself that more people don't know.  He has a great way with humor (when introducing Mason, he tells Watson "Like many of his generation, he's named after a profession his parent's wouldn't practice: Hunter, Tanner, Cooper, Mason).  He also works so well with an inanimate object, both storming and contemplating the silent Bella.  Miller runs the gamut as Holmes, giving us a complex figure: bright but a bit wary of human emotions which he has but is unsure what to do with them.  As he talks to Bella, he asks about love.  He admits to loving his mother, Irene, and after a fashion, Watson.  Bella asks "Why is love needed?"  Holmes has no answer.

I thought Lovibond and Liu worked well together, developing if not a relationship at least a rapport.  When they were together, listening to death metal, each brought humor to things. Capron was wonderful as Mason, able to match Miller beat for beat (to Holmes' snarky comment, he quips "What's so normal about Sherlock?"), and bringing a youthful enthusiasm as the tech expert.  I hope he too makes a return appearance (but I do the same about Sherlock's sponsor Alfonso and Ms. Hudson, so who knows if I will get my wish).

The case(s) were resolved both quickly and logically, we got great work from both the cast and guest stars, and we had those character explorations Elementary does so well.   Bella I thought was quite beautiful.

Oh yes, we got CLYDE!

Next Episode: Rip Off
Posted by Rick at 7:55 AM