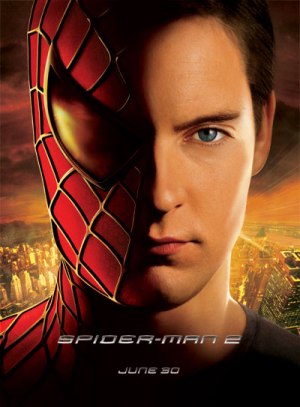 Thanks to James the Movie Reviewer (as we lovingly call him, Our Only Reader) for the recommendation.

Few films have left me with a contradictory, conflicting view at each viewing as Spider-Man 2.  There are some films that I love every time I watch them (Casablanca, It's A Wonderful Life, Singin' in the Rain, Citadel, Hugo, The Spectacular Now, Jane Eyre).  There are films I loath every time I see them (The Hangover Part II, Spider-Man 3, Superman IV: The Quest for Peace, Superman Returns).

Then there is Spider-Man 2.

The first time I saw it, I completely loved it.  I thought it good but not as great as Spider-Man (which I consider one of the greatest comic-book adaptations ever).  I did, however, go through an emotional roller-coaster that took me days to recover from.  It was good enough to make me super-hyped about Spider-Man 3.

The second time I saw it, I completely hated it.  Doc Ock as a good guy?  A lot of plot slamming into each other?  I wondered whether my enthusiasm for the character clouded my view of the film.

The third time I saw it for a Spider-Man retrospective, both my enthusiasm and my disdain were tempered to where I thought it a good but not great film.  That is why I gave it a barely passing grade of C+, which is good but not great.

Now comes the fourth time I enter the second chapter of the adventures of our friendly neighborhood Spider-Man.  Would I see it as the classic I first thought it?  Would I rediscover the reasons for my antagonism?  Would I still struggle to think it worth elevating to a higher level, sink it even lower, or perhaps still remain ambivalent on it?

What I see now, I see not with the eyes of a Spidey fan, but with the eyes of an analytical film reviewer, one who isn't going to let emotion sway his views.  With Spider-Man 2, I saw far too much comedy, particularly in the first 2/3rds of the film, that I felt took too much away and took up too much time.  It's as if Sam Raimi was just afraid to make a serious comic-book film and wanted to show how 'fun' everything is.  We started with a long and I think unfunny bit with Peter Parker attempting to deliver pizzas the distance of 42 blocks in 7 & 1/2 minutes.  I says to myself, 'that can't be done'.  I says to myself, 'him coming in through the closet at the end is stretching this out'. I says to myself, 'I'm not laughing'.

Again and again sometimes really good moments brought down by a stab at comedy that I think took away from things.

A plot point (which kept popping in and out) was how Spider-Man kept losing his powers, almost always at the worst possible moments.  This led to two moments that I thought were wasted opportunities.  The first is when Spidey is forced to take the elevator.  The whole thing could have been cut without affecting the story.  Spider-Man could have taken the stairs.  He could have changed into Peter's clothes to avoid such an embarrassing moment.  But NOOOO.... It had to be there because we all wanted a laugh.  Maybe I laughed the first time.  I haven't since.

The second and worse moment for me was when Peter gets his confidence and some of his powers.  He leaps from the building and yells, "I'm BACK!"  I was so happy at that moment: my Spidey WAS back.  Wouldn't you know it: he comes crashing down to Earth, and ends with him clutching his back and saying, "My Back!"

I don't know.  I guess people find this funny.  I didn't.

There were parts that I did find funny that I don't think were meant to be.  When Doc Ock takes poor Aunt May, the entire battle between Spider-Man and Doctor Octopus had me laughing for all the wrong reasons.  One thing I didn't think worked was when we had a heavily-accented Asian woman singing the Spider-Man theme song.  Leaving apart that it wasn't funny, it struck me as almost racist; the heavily-accented Mr. Ditkovich, who listened to klezmer music (which is Jewish folk music), didn't sit well with me either.  It was dangerously close to being anti-Semitic.

There were also other aspects besides the heavy reliance on comedy that made me cold towards Spider-Man 2.  Raimi, maker of The Evil Dead films (the first I think involving a tree raping a woman if memory serves correct), I think went back to his roots when Doc Ock first unleashed his fury on the medical team operating on him.  I thought the whole thing looked like a horror film.  I was surprised a bit at how Raimi used the trappings of a horror film in a film geared towards comic-book fans (some of whom are children).

My view is that Spider-Man 2 was so sprawling that it seemed to grow for no real reason.  I disliked how heavy-handed the movie was with the Mary Jane/Peter relationship (not to mention the fiancée that served no real purpose apart from giving a conflict that I didn't think was there).  I disliked Danny Elfman's score, which was also heavy-handed (did we really need a big choir when Otto Octavius' machine first appears?  It's not like we don't get that it's dangerous).  I found Kirsten Dunst a bit weak and pathetic.  I found James Franco a bit whiny and not good at all (I think he wasn't acting so much as just reciting the words with little conviction).  I disliked that the conflict within Peter Parker was so drawn-out.

As for Octavius, I agree with my friend Fidel Gomez, Jr. (who may or may not be dead): turning him into a sympathetic character wasn't a good idea.  Granted, I appreciate that Spider-Man 2 was going for something different, but I think there could have been a better way to show that he wasn't in control of himself.  Sometimes he was oh so evil.  Sometimes he was oh so nice.

It wasn't until Octavius and Harry join forces that I felt the film picked up, and from that point onwards I was interested.  Up to then, only the scene where Peter confesses to Aunt May about how Uncle Ben died was a standout.  In that scene, I did feel emotion, I did see Rosemary Harris and Tobey Maguire act and Sam Raimi direct.   Once we got to when we had a real antagonist and a real protagonist then we got a movie.  Before that, it was a long stretch.

As a side note, how exactly did Peter talk Harry into letting him go?  A simple punch would have been enough, but Spider-Man 2 never answered how, after capturing Spider-Man, Harry Osborn didn't do anything with him?

Once we had the battle on the elevated train, we had a movie that picked up steam (no pun intended). From that point onwards, I actually cared about what was happening.  The movie actually came alive.  However, almost everything prior to that felt long, tired, unfunny, and boring.

Now that I've seen Spider-Man 2 for the fourth time, I can say that yes, it is better than either Amazing Spider-Man film (and I'm not sad to see Andrew Garfield go, though I still hold out hope that Dylan O'Brien, and not Logan Lerman, will be the new Spidey, not another British guy).  I think Spider-Man 2 is not in the same league as Spider-Man, but is infinitely better than Spider-Man 3.

However, I also think Spider-Man 2 is too long, too reliant on comedy, and doesn't pick up until the last third of the movie.  If it weren't for that, the film would have failed completely.  It's lucky I thought the last third was good, otherwise, I would have been one of the few negative reviews.

As a result, I see no reason to alter my original score.

REEVALUATED DECISION: C+
Posted by Rick at 6:26 AM