While it's been a while since I kept up with Elementary, the American television adaptation of Sherlock Holmes stories, I do note one major difference between this and other adaptations of Canon.  In particular, I think on its British counterpart, which Elementary has struck ire in the hearts of the Sherlockians.  The same people who genuinely think Steven Moffat and Mark Gatiss created the characters and/or can't be bothered to read Canon, insisting it can't be as good as Sherlock, will never acknowledge that Elementary is any good (or the versions with Jeremy Brett, Vasily Livanov, or Basil Rathbone for that matter).  As I see it though, Elementary's greatest virtue is in the characters and not the case.  Such is the case (no pun intended) with Just A Regular Irregular.  We get a deeper focus on the characters, and while the actual case seems to resolve pretty nicely I won't begrudge the fact.

Sherlock Holmes (Jonny Lee Miller) finds that an old acquaintance needs his help.  Harlan Emple (Rich Sommer), an eccentric math genius who helped Holmes in a previous case, has been involved in a Puzzle Hunt, solving complex math problems lead to coordinates which can lead to a prize worth $1,700, 077.  Harlan is working on the problem and as he comes upon the next location for the next problem, he stumbles upon a dead body.  Fortunately, Harlan is one of Sherlock's 'Irregulars', a group of experts Holmes calls upon when he faces a subject he isn't strong on.  The last time, Sherlock was working with Joan Watson (Lucy Liu).   Now he's with Kitty Winter (Ophelia Lovibond).  Kitty, like Joan, finds all the math rather tiresome, but slowly we find that there appears to be a serial killer at work behind all the math problems.

Joan also learns that Kitty is a rape victim who was tortured and kept prisoner.  She believes Kitty needs professional help through group therapy, but both Kitty and Holmes appear somewhat dismissive about all that.  As it turns out, more mathletes get bumped off, and Harlan for his part feels betrayed that Holmes went to another math expert when he was in London. Holmes for his part finds that Harlan's odd homage (through a bad math-exposing site called Mo Shellshocker's Math Offenders) is both displeasing and the reason for the murders.  In short, it is Harlan who has been the target.  The killer has set these math traps to lure the anonymous 'Mo Shellshocker' into the open.  Unfortunately, the killer could not be sure that he killed the right mathlete, and Harlan was unwittingly a few steps behind, causing others to die.

While we find who the killer is and the reason for it, Holmes finds that he isn't real 'friendship' material.

There was a lot going on Just a Regular Irregular, except for the actual resolution to the case in hand.  I admired the editing in making the viewer think that Harlan was coming close to danger while Holmes explains that despite what Harlan may think, asking Holmes to join him at parties is not what he does. However, the actual killer turns out to be the guy who pops in during the middle of the episode whom we pretty much peg to be the culprit.  It almost seems a waste of a guest star to give him so little to do.

However, while the case wasn't the strongest, so much of Just a Regular Irregular was that it lifted the episode. First and foremost is Sommer's return appearance as Harlan, the mathematician who must undress to solve problems (a habit which horrifies both Watson and Winter).  I enjoyed his first appearance, which brought a lightness and humor to the episode.  Now with Harlan being the focus of the episode, Sommer gets to make a stronger and better impression.  If there were any justice on this Earth, Rich Sommer would be seriously considered for a Guest Actor in a Drama Emmy for his wonderful turn.  He has a great quip when they leave a group that is working on math problems to find 'Mo Shellshocker', dismissing them as "The League of Concerned Mathematicians".

"So to recap, I've spent the last few months of my life playing a game that was designed to kill me," Harlan sadly observes to a rather unsympathetic Holmes.  As he ponders just how wrong all this is, he wonders if there is a lesson in all this. What he's looking for is a moral, Holmes observes.  There is a moral: games are for idiots.

Miller is also strong as Holmes, who has to confront some rather unsavory aspects of his personality.  He is still a master of sarcastic remarks (upon finally meeting Joan's boyfriend Andrew, played by Raza Jaffrey, in a state of undress, he remarks to him that "Watson seems adequately sexed").  However, he also shows that Holmes is struggling with an impressionable and lonely man's idolization of him.  Holmes sees clearly that Harlan thinks highly of Holmes, which doesn't surprise Sherlock but doesn't thrill him either.  Instead, Sherlock finds that he isn't one for regular friendships.  He also has a curious idea about how he and Watson deal with Kitty.  He sees himself as the father: logical, and Joan as the mother: nurturing.

Liu matches Miller in this scene, where she rejects the comparison.  She knows that therapy is as valuable to recovery as work is, and that Holmes should do with Kitty what Joan did with Sherlock.  Liu and Lovibond do great work together as Joan and Kitty work together, slowly, tentatively.  A subplot involves Joan asking Kitty for help in an investigation of her own, and while it resolves itself well I think Liu and Lovibond (and Joan and Kitty) doing great work.

One thing that was hit-and-miss was Phil Simms' cameo in the opening, where we learn the NFL great is an expert knife-thrower.  It's clear Simms is no actor, but it was light enough.  Not the greatest thing and a bit superfluous but harmless enough.

I think the actual case was resolved rather quickly, but I found Just a Regular Irregular to be a great exploration of the characters, and with a great guest turn by Sommers (who yes, would be great for a return appearance), this was a real treat. 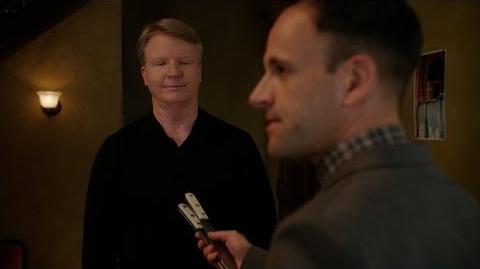