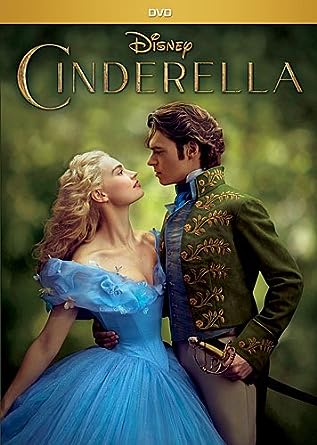 The thing about Cinderella is that it knows what it is: a pure visual confection, appealing to those who know the story best from the Disney animated feature that Cinderella freely draws from.  There's a reason for that: this Cinderella is a live-action adaptation of that Disney movie, perhaps a bit more expanded than its predecessor but an adaptation nonetheless.  I think that Cinderella, fully aware of what it is, didn't bother to be an update, a retelling, or anything other than a squarely traditional, visually sumptuous picture.  As a result, it is very good.

Ella (Lily James) has a pretty happy life.  She is loved by her mother (Hayley Atwell), who tells her to 'have courage and be kind', but Mrs. Tremaine soon dies.  Her father (Ben Chaplin), soon remarries, and the new Mrs. Tremaine (Cate Blanchett) comes, accompanied by her two daughters Anastasia (Holliday Grainger) and Drisella (Sophie McShera).  Mr. Tremaine, a wealthy merchant, goes off for business, and he too dies.  The Lady Tremaine is displeased that she is now a widow twice over, and slowly pushes Ella to be the sole servant in her own home.  Her stepsisters mock her, dubbing her Cinderella (from the cinders that cover her face).

She has no one to confide in but her mice friends and her horse.  She rides and meets someone who tells her he is Kit, an apprentice on a hunt, but who is really the Prince (Richard Madden).  Unaware of who he really is, she is the first person to treat him as a person and not as royalty.  The King (Shakespeare denier Derek Jacobi) wants his son to get married to a princess quickly, as he is dying.  The Prince wants to marry for love, but nonetheless the King orders a ball to find a bride.  The Prince, however, gets his father to invite the kingdom's nobility and aristocracy as well as foreign princesses to the ball.

As such, the Tremaine's daughters can attend, and Lady Tremaine is determined to marry one of them off to the future monarch.  That is, except for Cinderella, who is forbidden to go, royal edict or no royal edict.  Cinderella is heartbroken, but she gets unexpected help from her Fairy Godmother (Helena Bonham Carter), who uses her rather ditzy style of magic to help Cinderella attend the ball. At the ball, Cinderella discovers that the apprentice Kit, whom she fancied, is the Prince; the poor farmer's daughter Kit (his father's nickname for him) is the same girl who has dazzled the entire Court.  However, she must flee at the stroke of midnight, in her rush leaving her glass slipper.

Kit soon becomes King, and begins his search for his Queen.  The Lady Tremaine discovers the other glass slipper and when Cinderella rejects a deal to make her the power behind the throne, the Lady Tremaine smashes the glass slipper.  She then strikes a deal with the Grand Duke (Stellan Skarsgard), who wants the new King to marry a true royal princess.  The King, however, will not be denied.  With his own glass slipper, he orders all the maidens to slip it on.  Obviously, it fits none, and when they arrive at the Tremaine estate, the sisters are fitted and found unfit.  Cinderella, locked in the tower, attracts the attention of the soldiers by her singing, but both the Grand Duke and Lady Tremaine push to leave.  However, one of the soldiers stops them. It is the King in disguise, who insists on having all the women try the slipper.  The shoe literally fits, and they marry (the Lady Tremaine, her daughters, and the Duke we are told, leave the kingdom, never to return).

And they lived happily ever after, the Fairy Godmother tells us.

Again, Cinderella breaks no new ground.  It isn't attempting to update the traditional story or have a new spin on the tale.  It is determined to stick to as traditional a narrative as possible, and bless director Sir Kenneth Branagh for being firm in his vision to make this a visual feast while sticking with total tradition.

We get all the traditional motifs of the Cinderella story: the wicked stepmother, the mean stepsisters, the charming and beautiful Prince, the sweet Cinderella.  About the only big change is making the Fairy Godmother a batty, slightly bonkers figure.  Then again, since it IS Helena Bonham Carter...

The real brilliance in Cinderella is that it knows exactly what it is: a pretty film where everyone is asked to play their roles with no real introspection.  James proves to be a pretty but simple Cinderella, all sweetness and loveliness but not much of a spine to stand up for herself or against her stepmother.  Blanchett is vamping it up as the wicked Lady Tremaine, devouring the scenery but doing it with a wicked sense of wit.  Madden is pretty as the Prince, and I don't think much is asked of him apart from that.  Bonham Carter is the comic relief, daffy, scatterbrained, with a 'bibbidy-bobbidy-boo' thrown in once or twice for good measure.

It's a sign of the professionalism within the production that Bonham Carter and Branagh, who had an affair that broke up Branagh's marriage to Emma Thompson, worked together well (he directing, she starring).

I think that everyone pretty much understands that Cinderella is suppose to be pretty-looking, straightforward, traditional.  The highlight is the costuming, which is big, colorful, beautiful.

I found Cinderella to be pretty, enjoyable, sumptuous, and on the whole entertaining.  Its greatest strength is its total sincerity, its complete lack of cynicism or irony.  It knows what it is and doesn't pretend to be anything else.  It's an unapologetic family film, where good triumphs over evil, where we see two pretty people fall in love, and which is a lovely confection for the eyes.