The Beginning..., the Gotham series finale, had an extremely difficult task to accomplish.

It had to wrap up all our stories and character arcs.
It had to set up what we know as the Batman mythos versus the Bruce Wayne evolution.
It had to make sense.

The Beginning...mostly accomplished all this, not an easy task given the brevity of this season. Some things were not good, but fortunately the good outweighed the bad.

Bruce Wayne (David Mazouz) has left Gotham and traveled to what appears to be Tibet.

We jump to ten years later. Commissioner Gordon (Ben McKenzie) is about to retire just as his frenemy Oswald Cobblepot aka Penguin (Robin Lord Taylor) is about to be released from prison. Pengy's other frenemy, Edward Nygma aka The Riddler (Cory Michael Smith) is in Arkham Asylum, where his only real treat is in taking shots at a catatonic Jeremiah Valeska (Cameron Monaghan). Barbara Kean (Erin Richards) is now apparently both sane and a redhead as well as a good mother to her and Gordon's daughter Barbara Lee Gordon. Selina Kyle (Lili Simmons) is a cat-woman burglar.

Each in their way is waiting for Bruce Wayne to return and open the new Wayne Tower. However, it looks like there is mischief and murder. An elaborate plot where Pengy and Riddler are unwitting pawns is unleashed, a plot where Detective Harvey Bullock (Donal Logue) is also a patsy and that may cause the downfall of Gotham itself. Only a very strange figure dressed as a bat may stop this mad plot from someone who may not be as out-of-it as he appears.

At long last, with some help from Alfred Pennyworth (Sean Pertwee) and Lucius Fox (Chris Chalk), Gordon may not yet retire as he contemplates 'a friend': he that is to be known as "Batman". Part of me understands the pressure Gotham was under to wrap everything up, so I'm cutting them some slack. There is also the issue of having so many villains to deal with, and on the whole I think The Beginning...did a pretty good job with the four main ones.

As a side note, how I wish my favorite, Mr. Freeze, had come back, but one can't have everything can one.

My issue is less with the flash-forward than it is with the overall plot. Somehow, echoing Dumb and Dumberer and Galaxy Quest is not a good twist. On this show, it always stops on "one".

Even at the end of The Beginning..., we could not get them to admit that Jeremiah is The Joker. I don't think we heard them use the name 'The Joker' in The Beginning..., and this fan-dance about Jeremiah's eventual identity was one of Gotham's low points.

It kept teasing viewers about the Clown Prince of Crime, first with Jerome and then with Jeremiah, never saying his name. It was pretty clear where that plot line was going. I'll give Monaghan credit in that he was strong as the menacing, monstrous "whoever he was".

It was nice to see the double-act of Taylor and Smith together one last time, where they managed to get moments of humor into things. They are the other Dynamic Duo.

To my mind, Taylor should be considered the best Penguin on screen and Smith the second-best after Frank Gorshin's take on the character. The Beginning..., while giving us at long-last a monocle-wearing pudgy Pengy, kept to Taylor's version of a needy, mommy-obsessed and troubled man with a flare for the dramatic. 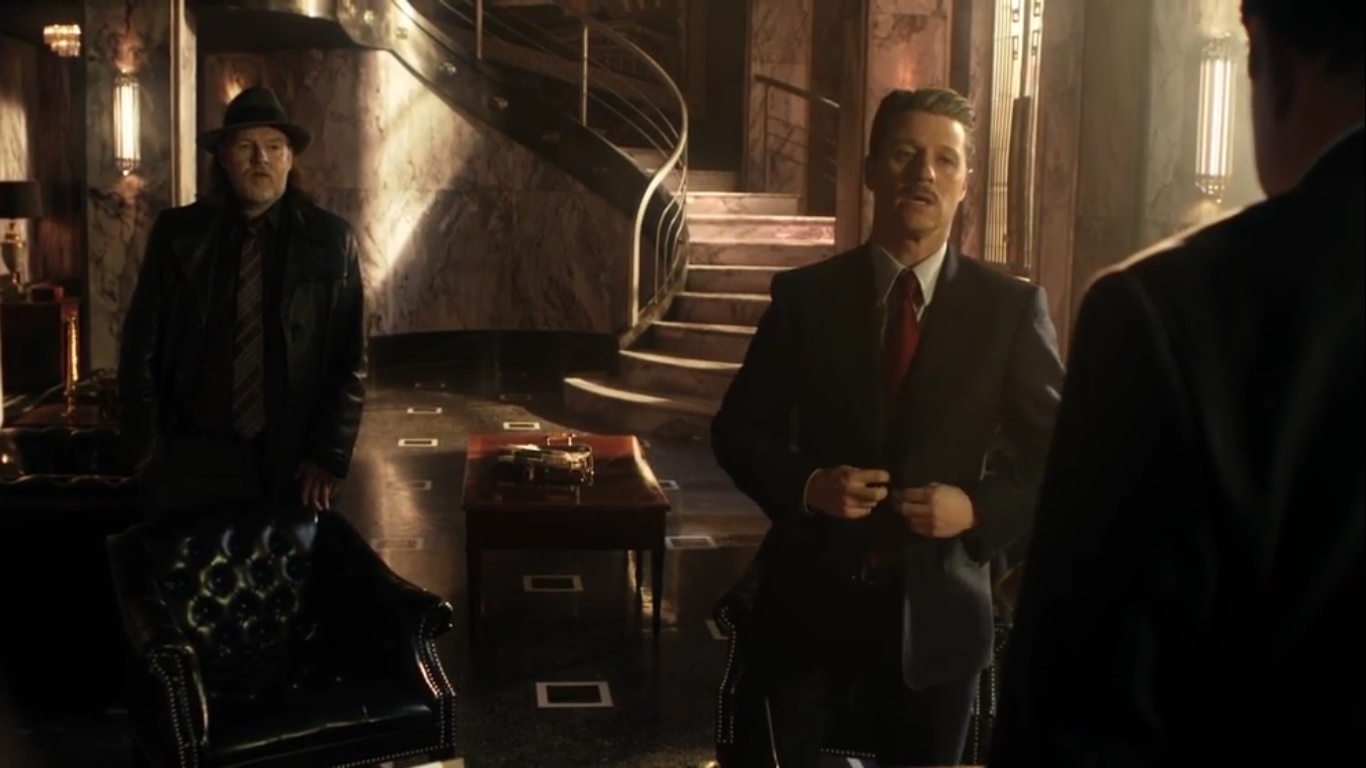 Seriously Pengy, why take Gordon to the docks?

We even get callbacks to the past, as when Mayor Aubrey James (Richard Kind) finds himself abducted and strapped to a bomb again. Even he seems incredulous at this repeat, and the whole thing was badly handled in my view.

As a side note, seriously...why would Gotham citizens vote Mayor James back in again?

As much as McKenzie did well here, I wish he had kept the mustache throughout the whole episode. That was just baiting the audience. We can take a stab as to how Bonkers Babs got her mind back. Morena Baccarin as Lee Thompkins had very little to do unfortunately.

There were other elements I wasn't keen on. I was troubled by having the Arkham guard have his blood splash over a family picture. That just bothered me, a reminder of how sadistic things can get. That was nothing compared to holding Barbara Gordon over a tub of toxic waste. Even the suggestion of torturing children is way too far for me.

Finally, I know they were going for a big reveal to close out the show, which to be fair to them was what they promised when Gotham premiered. However, I think they went a bit overboard constantly teasing this 'where's Bruce?' bit, though again to be fair they were in a bit of a jam.

I will give credit to Simmons, who filled in as the adult Catwoman. She strongly resembles Camren Bicondova and her scene with an unseen Bruce Wayne/Batman worked quite well. Credit too for Mazouz who had to perform only with his voice.

Gotham's cinematography, always one of the best aspects of the show, similarly too worked well.

The Beginning... is a good though not great way to end Gotham. A bit rushed to where perhaps a two-hour finale might have done some good, on the whole it did a good enough job to finish a series that got a bit lost but eventually found its way from its dark knight of the soul. 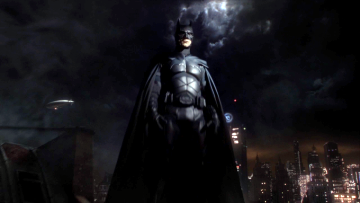 Next: Gotham: The Complete Fifth Season