With regards to the 92nd Academy Awards, I can take a certain satisfaction that I was 20 out of 24. Since publishing my last predictions I had changed my mind on a few categories.

First, the list of winners, with asterisks on where I missed.

I had 1917 winning Best Picture, Director and Sound Editing. I also had originally thought Judy would win Makeup and Hairstyling but switched to Bombshell. Try as I might, I could not get Documentary Feature right. It really was an open category, where I thought Honeyland would get it.

For those interested in tallies of films with multiple winners, here they are:

All other Best Picture nominees won one, meaning only one film was completely shut out. 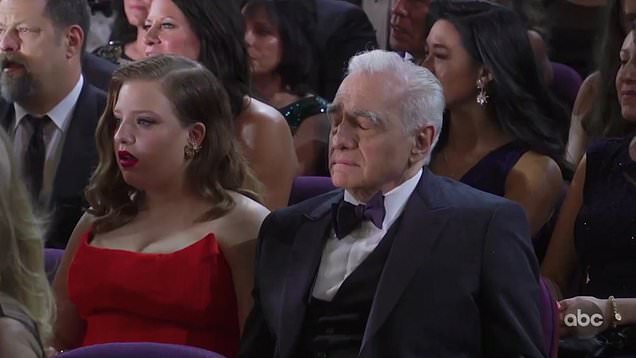 No wonder Martin Scorsese looked as if was dropping off during Eminem's performance. The Irishman's fall was not unexpected but still disappointing. One simply wonders why the film failed so spectacularly after earning raves. My own theory is that other, "hipper" films stole The Irishman's thunder.

With regards to the winners there weren't any big surprises. Actually, I'd say there were no surprises. Sure, Film Twitter is elated about Parasite, and it is a good film. Maybe not my choice but not one that causes such anxiety as did Green Book last year. Every winner was if not predicted months ago at least well within the conversation.

The only win that I actively disliked was Best Original Song. Even after hearing Cynthia Erivo perform Stand Up from Harriet (giving her a standing ovation), they still went with the bouncy, peppy and inconsequential (I'm Gonna) Love Me Again from Rocketman. Subconsciously or not (I'm thinking not), Elton John sowed the seeds to his victory by pointing out he and his longtime writing partner Bernie Taupin had never won anything as a team. The Academy members, already enthralled by John's big Oscar bashes, voted for him regardless. I note that John did not get a standing ovation for (I'm Gonna) Love Me Again, but unlike Taron Egerton, Elton John had it in the bag.

At least Into the Unknown went unknown despite having it sung in a multitude of languages. I'm sure that five minutes after performing it, no one could actually remember Into the Unknown in any language, even whichever language former South Bend Mayor Pete Buttigieg claims to speak fluently.

Come to think of it, I doubt anyone will be able to sing (I'm Gonna) Love Me Again without having to look it up. I still can sing Call Me By Your Name's Mystery of Love and Stand Up, as well as listen to them over and over. I can't even remember Remember Me. 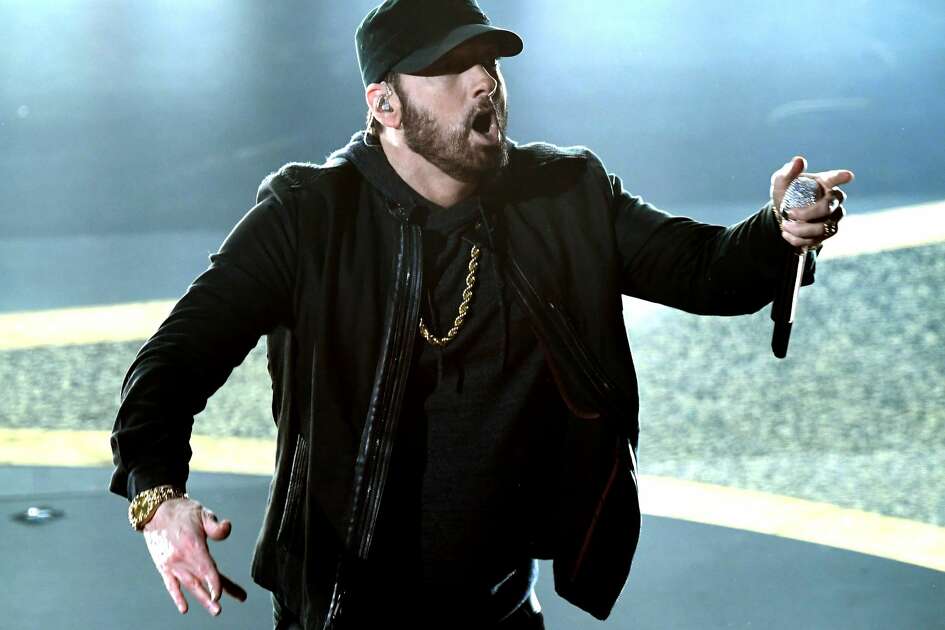 We DID get to hear Eminem perform Lose Yourself seventeen years after winning Best Original Song. It should be noted that Billie Eilish, who performed Yesterday as part of the In Memoriam section of the broadcast, was a year old if that when Lose Yourself hit the airwaves, perhaps explaining her puzzled look at his performance. The loudness of Lose Yourself, punctuated by silences due to the necessary censoring of the lyrics, does not explain Marty's forty winks.

As has been pointed out, the many people happily rapping along to Lose Yourself can be simultaneously woke and not troubled by Mr. Mathers' past homophobic lyrics while being all pearl-clutching when it comes to Kevin Hart.

As for the show itself, again the Academy struggles with that kind of editing. It went well over its allotted time, and as expected there was the usual politicking going on. Unlike my fellow reviewers Christian Toto or Jacob Smith (Society Reviews), I'm not outraged or angry or even irritated by such things. 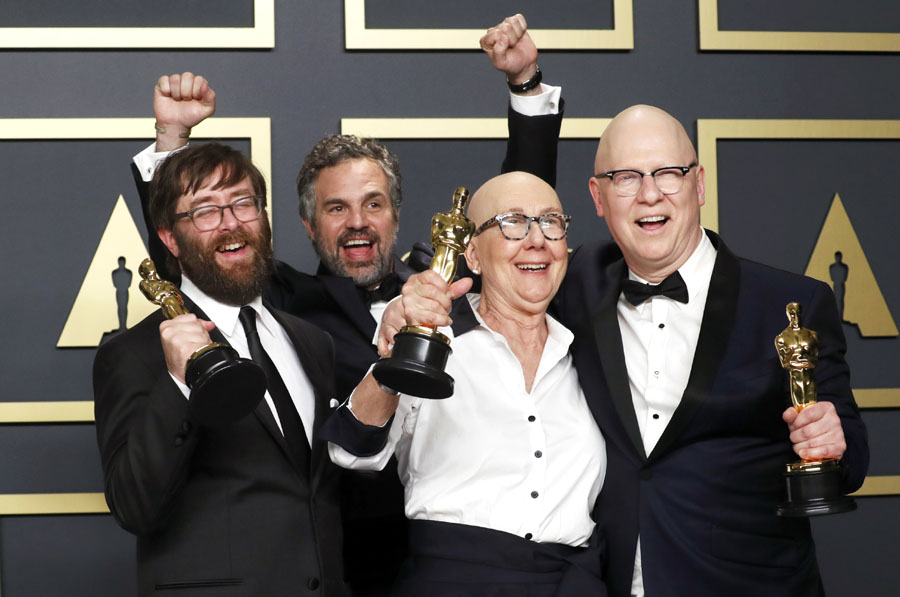 Brad Pitt's acceptance speech started out with an appraisal of the recent impeachment. Fine, he can speak on such things if he wishes. I would not think the Academy Awards is the best venue for such things, given he's accepting an award for having exceptional abs at age 56...I mean, for his performance in Once Upon a Time in Hollywood. I'm just puzzled as to whom he is actually speaking to.

He must be aware millions of people watch the Academy Awards, so he is not just preaching to the choir. Does he genuinely think his fellow Missourians are going to now vote for Bernie Sanders or any Democrat based on his lofty pronouncements?

Does Pitt genuinely picture some MAGA-hat wearing overweight white male, washing down his Oxycontin with Budweiser and who stumbled onto the Academy Awards confused as to why there was no football game on, calling out to his barefoot and pregnant wife in his best Defender of True & Pure Conservatism Rick Wilson imitating the "credulous rube" voice, "Well, Ma Kettle, that there pretty boy from Fight Club is just so upset about John Bolton not witnessin' in the Senate trial, so we ought to now get Trump out and bring Socialism to this here U.S. of A."?

Is that really in the back of Pitt's mind? I just want to know what the end objective is for Pitt, or Josh Gad throwing in climate change denial and healthcare advocacy while introducing Into the Unknown. What truly is their goal for all this? That they do such things during what is ostensibly an awards presentation for film and not a Democratic Party rally just strikes me as odd.

Why does he or Mark Ruffalo or anyone else paid far more than those "credulous rubes" feel obligated to lecture them on everything and anything? Best Documentary Feature cowinner Julia Reichert quoted Karl Marx while hobnobbing with people who get $78,000 cruises as part of their Oscar gift bags.

Is it me or is there just a slight disconnect? 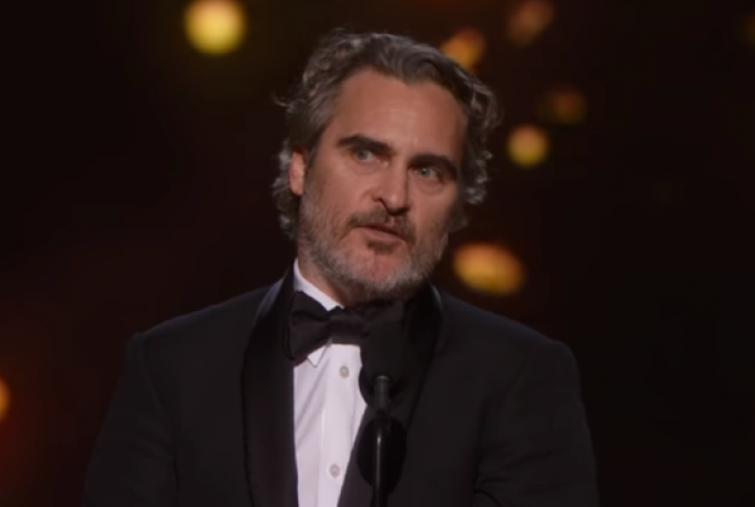 However, who would have thought talking about cow insemination and the evils of milk drinking would trump The Communist Manifesto? Joaquin Phoenix is a fine actor and passionate animal rights activist. All well and good, don't begrudge him his views. Yet, in his four minute speech not once did he thank or even mention anyone from Joker.

Instead, his speech for winning an award for playing a murderous psychopath was on how awful humans were for not hearing the cries of cows for taking their calves and their milk.

In his world, we are all evil for drinking milk. Louis Pasteur should be dug up and beheaded.

For some reason, I'm reminded of Timothy Treadwell, the subject of Grizzly Man. Both Treadwell and Phoenix almost romanticized animals to where they applied human emotions to non-humans. Treadwell thought of the bears as almost his friends...until one ate him and his girlfriend. I have no way of looking into a cow's soul, but I don't think cows are all that upset over Man taking their milk from their utters.

Joaquin Phoenix is free to believe as he wishes. He's free to live his life free of all animal products if he wishes. He can even take up his time and the times of his colleagues to tell us how mad the cows are. He, however, is not free to dictate how my life or anyone else's life should be. If I wish to drink milk or eat steak, Joaquin Phoenix, no matter how well-intentioned, has no say in the matter and should have no say in the matter.

Such speeches don't win hearts and minds. They harden them, and end up making the speaker sound a bit bonkers.

Renee Zellweger decided Phoenix was a hard act to follow, so she ended up sounding more bonkers without resorting to cow insemination. To her credit, at least she mentioned Judy Garland, but what exactly was she saying? It was a list of people, but once she thanked her whole family she started sounding a bit loopy, as if she didn't know where to go after listing her "heroes" and just started rambling.

Who else thought name-dropping Dolores Huerta, Bob Dylan, Harriet Tubman and Martin Scorsese with Judy Garland somehow "unite us"?  "We agree on our teachers, and we agree on our courageous men and women in uniform who serve..." she went on and on. What exactly Fred Rogers and Judy Garland share in terms of heroics with my favorite teacher, Mrs. Hearn, I can't begin to guess.

Well, that's it for the 92nd Academy Awards. The winners save Original Song were once I thought were if not worthy at least good choices. The political nature of the show really does not bother me. It does puzzle me.

As for myself, I'll be washing down a triple-meat cheeseburger with an extra large mocha frappe, extra whipped cream, in honor of Joaquin Phoenix's courageous and powerful advocacy for bovine beauties. 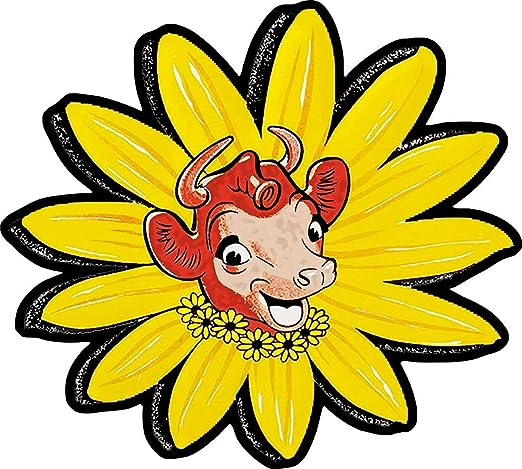