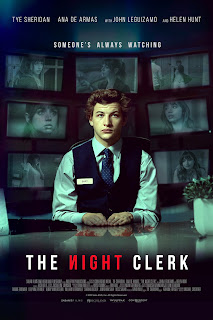 Asperger's and murder mix in The Night Clerk, a good but not great crime drama that is elevated by some strong acting.

Bart Bromley (Tye Sheridan) is our title character, a nice enough young man if not for his pronounced Asperger's and his penchant for watching hotel patrons in their rooms via hidden cameras. His viewings is not necessarily prurient so much as they are anthropological, using the hotel guests as models of behavior with others.

One of those guests is Karen Paretti (Jacque Grey), whom he observes has a secret guest. Surprised early by his desk clerk relief, it isn't until he's in his basement bedroom that he sees Karen is in danger. When he gets there, he finds that in his words, she might be dead. 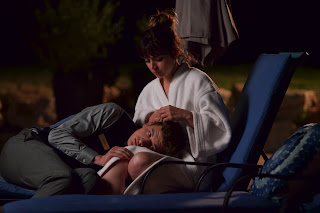 Now he finds himself as the prime suspect in Karen's murder, with Detective Espada (John Leguizamo) believing Bart is hiding something. As the investigation goes on, Bart is transferred to another hotel, where a new guest comes. She's  Andrea Rivera (Ana de Armas), an alluring woman whom Bart is attracted to, enough to try and behave more like a non-Asperger's person.

She takes to his kindness and he offers to "be your lifeguard", but there are wicked games being played, with Bart potentially being the patsy to nefarious acts. Even with his mother Karen (Helen Hunt) attempting to protect him, Bart finds himself in great danger from all sides. Will he be seduced? Will Detective Espada find that Bart had a hand in Karen's killing?

To be honest, the mystery within The Night Clerk is not that big of a mystery given we have a very small cast. It would have almost been a bigger twist if Bart had committed the murder, and part of me came close to thinking he was the killer. I'm not sure though that writer/director Michael Cristofer was seeking a complex murder mystery as he was exploring such a scenario with our main character. What would someone with limited social skills, one who struggled with basic interactions and expressing things like sexual desires behave when confronted with wickedness? 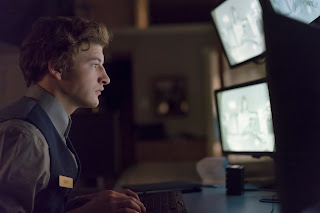 The Night Clerk may not be a big mystery (if you can't figure who is involved in the murder you aren't paying attention) but it has as a major plus a strong group of actors. Tye Sheridan is one of our best young actors, someone who can elevate just about everything he is in just by his presence (Dark Phoenix being beyond even his considerable skills). In The Night Clerk, he gets to push himself as an actor with his Bart, simultaneously ill at ease and aware that he is ill at ease. Sheridan's voice and tightly-wound facial and body movements are strong enough to convey Bart's Asperger's without becoming cartoonish or laughable.

It's a difficult thing for an actor to play someone with a development disorder without looking like a bad Rain Man impersonation. Fortunately, Sheridan is skilled enough an actor to make Bart almost sympathetic. I say "almost" because regardless of his motives, placing hidden cameras in hotel rooms where he is able to essentially spy on people is at the very least creepy, and frankly that in itself is criminal. It's to the film's credit that this variation on Rear Window doesn't come across as thoroughly seedy.

De Armas too stretches, especially given that she played the innocent and wholesome murder suspect in Knives Out. Here, she is something of a femme fatale, though The Night Clerk does seem to waver if it wants to make her a willing or unwilling accomplice in the hijinks. Though not a major part of the film, it is always a welcome sight to see Helen Hunt in film. Only Leguizamo seemed to a bit off here, as if he was not quite convinced his detective was intelligent. Espada sees Andrea leave Bart's basement home but does not appear to wonder why his Number One suspect had a lady caller.

The Night Clerk also had one odd moment in a montage where Bart cleans himself up in a vague hope to woo his damsel in distress. This montage, complete with the music and editing, made the film almost play like a romantic comedy.

Minus that and that the mystery is not much of a mystery, The Night Clerk has enough atmosphere and strong acting performances to be of interest. Tye Sheridan continues to impress and build himself up a resume of strong performances that show him to be one of our finest young actors, one who makes almost anything he is if not great at least watchable.

Except for Dark Phoenix, but that's not his fault.