Pain and Glory: A Review 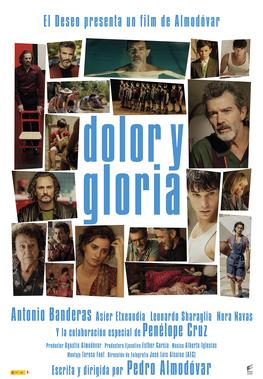 Past and present, fact and fiction blend, weave and shift in Pain and Glory, the newest film from Spanish filmmaker Pedro Almodóvar. This tale of the artist in winter does a fine job of showing how real-life can be inspiration to create a well-crafted film.

Famed Spanish director Salvador Mallo (Antonio Banderas) is in poor health physically and spiritually. He especially is not eager to revisit Sabor (Flavor), an early celebrated film that is going through a second round of acclaim. That acclaim means having to re-encounter his frenemy, leading actor Alberto Crespo (Asier Etxeandia). Despite their antagonism, Alberto knows a good thing when he sees it, particularly Salvador's writing that he pushes Sal to craft as a monologue for him. Eventually doing so, the one-man Addiction gets the attention of Federico (Leonardo Sbaraglia), who is also tied to Salvador's life.

In and out of thought and some heroin, Salvador floats back to his early life with his mother Jacinta (Penelope Cruz), who makes the best life she can after her husband brings them to live in a literal cave. As a child, Salvador teaches a young construction worker with a talent for drawing, Eduardo (Cesar Vicente) how to read, write and do math. Salvador also discovers film, music and perhaps his own erotic dreams. As an adult, he finds that what causes him difficulty swallowing can be cured through minor surgery, and at last, this filmmaker can return to both the past and future with a film based on his life.

I have never been big on Pedro Almodóvar, though to be fair the only Almodóvar film I have seen is Tie Me Up! Tie Me Down!, and frankly it horrified me (or at least my memories of it). Here though, this is a softer Almodóvar, one who looks back not in anger or regret but with some wistfulness. Drawing from his own life to be almost a biopic, Pain and Glory brings to mind 8 & 1/2, not perhaps in terms of brilliance but in terms of a filmmaker bringing his own life and art to create.

Working again with longtime collaborators Banderas and Cruz, Almodóvar draws great performances from them. Banderas was rightfully nominated for Best Actor as the older Almodóvar stand-in Salvador. He is not the glamorous, dashing figure but instead a weak, almost bumbling one, a man filled with some regret and fear but able to see his faults. Banderas looks haggard, shuffling along but that is absolutely perfect here. As the older Salvador, Banderas' weathered features and soft voice capture his doubts, regrets, and pains, though not without giving us at times Salvador as genuinely "Mallo" (perhaps a pun on "Malo" for "bad"), as when he via telephone humiliates Alberto.

Still, Banderas and Almodóvar give us a very tender portrait of the artist. Of particular note is when he speaks both to and about his mother, the sadness and overwhelming sense of failure overwhelming him.

Cruz too is excellent as the younger Jacinta, making the final twist at the end more revealing and surprising. She seems the epitome of a good mother, flawed but good.

Almodóvar also transitions between the past and present rather well, even when we have monologues or almost humorous takes on modern medicine, filmed beautifully. There isn't a bad performance in Pain and Glory, and it's a credit to Almodóvar as a director that both the transitions blend so well into each other and his cast is without fail all excellent.

What is well-done in Pain and Glory is that a lot of things can be open to interpretation, that things are not spelled out for you. Did young Salvador really faint because of heatstroke, or was our young child overwhelmed by seeing Eduardo in the nude, the first stirrings of what would culminate with future lost-love Federico? Was it a mixture? When we go back to this memory, we see it coming from the on-screen title El Primer Deseo (The First Desire), but nothing is certain in the film.

Again, despite not knowing much if anything about Almodóvar's life story it is nearly impossible to not think it is about him. Salvador's mother reproaches him near the end for his "autofiction" by including her and her neighbors as characters in his films; part of me wondered if Almodóvar metaphorically speaks for her about disliking others to know Todo Sobre Mi Madre (All About My Mother). In a way, Mrs. Almodóvar can be said that she has Volver (Return). Granted, that is a wild stretch but a sliver of me could not help think this.

Pain and Glory is a film that blends fantasy and reality from its beginning to its end, a film where the art of cinema simultaneously reveals and hides Todo Sobre Mi Director.