Has it been so long since the world was not only enchanted by Gwyneth Paltrow but that we believed she could be British? Shakespeare in Love, Sliding Doors and Emma all made us believe our winsome American was an ever-so-veddy-proper posh upper-crust Brit, her generation's Audrey Hepburn. Emma, the adaptation of Jane Austen's comedy of manners, is charming enough if a bit slight.

All this goes on to the amusement of her brother-in-law Mr. Knightley (Jeremy Northam), who marvels at Emma's mixture of naivete and arrogance. More romantic entanglements come when the dashing Mr. Churchill (Ewan McGregor) comes by, along with seductive Miss Fairfax (Polly Walker), all of whom may have designs on others. Complicating things are both the new Mrs. Elton (Juliet Stephenson) and the feelings of both Emma and Mr. Knightley. Eventually however, all's well that ends well in this hodgepodge of romance. 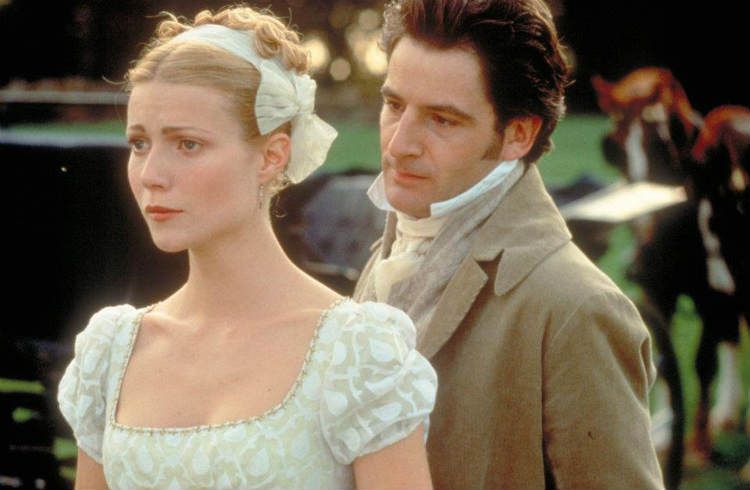 It wasn't until the end that Emma kind of won me over. Up to when Mr. Knightley and Miss Woodhouse realized what they knew to be true I was not particularly impressed with the proceedings. There was a stuffiness to the film, not quite Masterpiece Theater but still with the feeling that it was being "acted" versus "being". It wasn't so much stuffy as slightly unrealistic, at least for a bit.

However, as the film went on I did find it an enjoyable, light confection, a harmless romp through the merry world of Regency romances.

Paltrow is not as big a draw in film as she was in the early 1990's, at least apart from the Marvel Cinematic Universe. In Emma, she gives a good though not great performance with an acceptable British accent. More than that, Paltrow is appropriately fluttery while still being a surprisingly unpleasant character. Emma is convinced she know better about love than lovers themselves, so I give her credit for not making me hate her. She is not exactly endearing in her manipulative nature, but more, and I hate saying it, clueless. Again it's to her credit that she does not come across as a monster.

Northam was at the time the "dish du jour", and he acquits himself well as the man to match wits with our bumbling Cupid. He brings a slyness and even shyness to Mr. Knightley as he slowly realizes that whatever his protests to her machinations she really is someone worthy of love. Collette was delightful as the sweet but dim Harriet, appealing and charming while not being a ravishing beauty. Schacci is surprisingly elegant as Mrs. Weston despite being essentially a servant who married up.

The film does have merits in its costumes and Rachel Portman's score, both nominated for Academy Awards with Portman's chamber music-like score winning (making her the first woman to win for Original Score). It also has demerits in its editing, which was surprisingly clumsy and choppy when trying to cut two lines of dialogue together for a punchline.

On the whole, Emma is slight but pleasant, a nice little diversion for a Sunday afternoon.