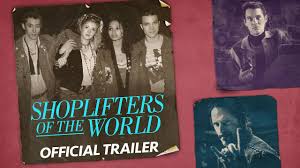 SHOPLIFTERS OF THE WORLD

So long as there are disaffected youth who find joy in misery The Smiths will have a ready audience. Shoplifters of the World is a loving homage to this most morose of musical groups, and while there are a few stumbles on the whole this man was most definitely charmed.

Denver, 1987. A group of teens on the brink of adulthood learn the most devastating news in human history: the British music band The Smiths has broken up. This devastates them, but the one most crushed is Cleo (Helena Howard). The Safeway checkout girl knows there's a better life beyond Colorado's capital, but exactly how to get to it is unclear. She and her three friends wander through Denver to mourn The Smiths' end: Billy (Nick Krause), about to join the Army, Sheila (Elena Kampouris), a Madonna-like girl, and Patrick (James Bloor), Sheila's boyfriend who is not so secretly struggling with his sexual identity.

Cleo's unrequited love, record store employee Dean (Ellar Coltrane) finds a different tactic to mourn. Dean, who is not so secretly in love with Cleo, decides to hold heavy metal disc jockey Full Metal Mickey (Joe Manganiello) hostage and force him to play a Smiths marathon. Mickey is angry about both being held hostage and having to play what he thinks is awful music, calling it among other things "records about dead queens and bicycles". He has little choice however, and as time goes on Mickey finds that The Smiths do have some merits.

As the now-Mad Manchester Mickey endures his Full Morrissey Meltdown, our young people wander through an unofficial Smiths wake and crashing a gay bar. Throughout the night, both Dean/Mickey and Cleo, Sheila, Billy and Patrick discover things about themselves and each other, all connected to those so young who sing words so sad. 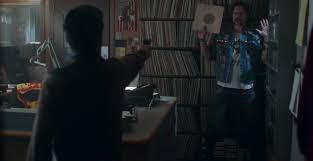 At its heart, Shoplifters of the World is a love letter to both The Smiths and their fans. Everything from shout-outs to their videos like Stop Me If You Think You've Heard This One Before to a cameo from Jose Maldonado, lead singer of the Smiths/Morrissey tribute band Sweet and Tender Hooligans punctuate the film. From the names Sheila (allowing a chance to hear Sheila Take a Bow) to Patrick (which is Morrissey's middle name), Smith fans will get many Easter eggs that will delight them. The world of Shoplifters of the World is one where this group can quote Morrissey as regular conversation, a point I'll return to in a bit.

The emotions and devotion "Morrissey and the Mopey Mopes" as Mickey calls them is something few bands evoke, and Shoplifters of the World shows a time when Morrissey and Marr were thought to hold all the answers to life's deep questions. Writer/director Stephen Kijak clearly means for Shoplifters of the World to be a light affair, starting from the opening tagline "Based on true intentions". He is fond of the characters, who find themselves at the crossroads of where to let their lives go.

Out of the cast, Manganiello is the best, perhaps because he is the only one of the main cast to actually remember The Smiths. He has some of the best quips in the film as the dismissive yet surprisingly open Mickey. He is able to grow as he realizes that like Morrissey Mickey too believes Meat is Murder. That Manganiello and Mickey is old enough to be the other castmembers father allows him to speak an important truth.

"One day your heroes are going to grow old...say stupid things that betray the past," he tells Dean. He sees, unlike our young people, that things have to change, that bands break up, and that nothing can remain eternal. It is also a tacit acknowledgment that the man who still sings Margaret on the Guillotine now is associated with politics further to the Right of Thatcher. 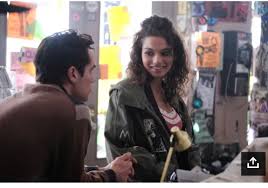 Essentially, Shoplifters of the World is two stories that meld in the end: Dean/Mickey and Cleo, Patrick, Sheila and Billy. As such, Ellar does some of his best work playing against Manganiello, showing Dean's vulnerability. The other castmembers are mostly good, though at times the script forces them to be a bit false.

Howard is generally weak as Cleo, trying too hard to be this rebellious girl who is desperate to get out of the backwater of Denver. It doesn't help her when she has to speak such lines as "Old enough to join Reagan's Army" when they are asked how old Billy is.

It's a case of both gilding the lily with their "I'm NOT an evil conservative" creds and it sounds forced and false. However, to her credit Howard does have a good moment in a monologue where she condemns the Molly Ringwald character in Pretty in Pink, so there is promise there. Kampouris too struggles at times with Sheila, for one is not sure if she is a genuine fan or just goes along with it to please her celibate boyfriend, who himself is not-so-vaguely gay. Given his general avoidance of sex and manner, is it really so strange to see Patrick finally making out with an older man when they crash a gay bar?

Krause and Bloor were better as the potentially bisexuals Billy and Patrick. Whether Billy is bisexual given he too appears in love with Cleo is a bit unclear however. Bloor does make Patrick a bit of a sad sack who struggles with life. Good not great work.

Shoplifters of the World at times tries too hard, such as when the characters attempt to use Smiths lyrics as dialogue. That doesn't come across as genuine. It also indulges a bit too much in 1980s nostalgia with appearances by Siouxsie Chu (Celia Au), a Cure frontman Robert Smith lookalike and a drag Grace Jones bouncer. I also am puzzled why the film didn't feature any note of the fierce Mexican-American fanbase, especially for a film that's set in Colorado.

However, the film is a pleasant romp through the Mad World of Morrissey and Marr. If you love The Smiths, you won't be miserable now with Shoplifters of the World.