STAR WARS: THE RISE OF SKYWALKER

Some things, perhaps, were doomed from the beginning.
After The Last Jedi, director J.J. Abrams had a nearly insurmountable difficulty with The Rise of Skywalker, the concluding episode to the now-nine episode Star Wars saga. He was essentially asked to recon a reboot that had already established so much in the Star Wars mythos that Star Wars fans hated. Add to that attempting to integrate a major character whose actress had died before she could return and Abrams perhaps found the whole thing simply too much.  The Rise of Skywalker is anything but, a muddled, boring mess that leaps about from one point to another but has nothing to thrill or excite.
The Resistance and the First Order are now on the hunt for each other, with Jedi trainee Rey (Daisy Ridley) and Sith Lord Kylo Ren (Adam Driver) continuing their efforts to lure the other into the Light or Dark Side. Kylo Ren has a surprising ally: the formerly late Emperor Palpatine (Ian McDiarmid), who has secretly created a massive fleet to wipe out the Resistance once and for all.
The Emperor has a special reason to find Rey, but it is not to kill her. It is to enthrone her as the new Empress, for we learn that Rey is the Emperor's granddaughter! None of this is known to Rey or her Resistance friends: dashing fighter pilot Poe Dameron (Oscar Isaac), former Stormtrooper Finn (John Boyega) or Wookie Chewbacca (Joonas Suotano). They, along with Rey, are in search of a Sith Wayfinder to find Exogol, the hidden world of the Sith.
The war continues with a secret Resistance spy in the First Order, and General Leia (Carrie Fisher) making the ultimate sacrifice to bring Kylo Ren back to being her son, Ben. Now redeemed to the Light, Ben and Rey form something of an alliance as she confronts her grandfather on Exegol. She manages to send her location to the Resistance, and all have a final battle for the future of the galaxy far, far away.

The Rise of Skywalker answers the question 'Can a company spend an estimated $275 million only to end up saying nothing'?  Four people are credited with the story, including credited screenwriters director Abrams and Chris Terrio, but I think many more hands were involved. Even if one were generous and said only four people created Rise of Skywalker, it would still be a hopeless mess.
The film skips and leaps from one world to another with nary rhyme or reason. So much is left out or unexplained you genuinely wonder if Abrams and Disney literally were making it up as they went along. On the planet Pasaana as it looks like the Resistance fighters were about to die, Finn desperately wants to tell Rey something. Twice he is asked what he wanted to tell her, and twice he demurs. It's lazy to bring up something only to never resolve it.
General Hux (Domhnall Gleeson) turns out to be the Resistance spy because...reasons. His only answer to why he is helping them is "I don't care if you win. I need Kylo Ren to lose", but again as to whether this is genuine concern for the future of the galaxy or a petty revenge is something for fanfic. As to how Rey ended up the Emperor's granddaughter when The Last Jedi established there was nothing special about her, well, I guess fans needed some grand explanation as to why she was so important.
How the Emperor managed to survive The Return of the Jedi and build up this massive fleet, well, reasons. Exactly who would want to have sex with the Emperor or who ended up having him as a Baby Daddy is for, I'm not exactly sure. 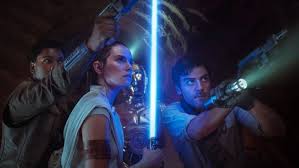 Again and again, Rise of Skywalker throws things in and asks questions that are never answered, teasing things that might have been more interesting than what we ended up with. There's Zorii (Keri Russell) a criminal with whom Poe has a past. She's a convenient plot device to get them out of jams as well as a way to abolish the queerbaiting between Poe and Finn. She is given such a limited screentime however that her character was also shortchanged.
Same with Jannah (Naomi Ackie), a former Stormtrooper turned Resistance warrior. She was unofficially paired off with Finn, but like Zorii and Poe they had zero chemistry and was there to just help.
The divisive Rose Tico (Kelly Marie Tran) was almost a cameo. Other tiny performances veered on comical. I imagine Greg Grunberg must have gotten a nice paycheck out of essentially doing nothing but standing around arms akimbo, occasionally speaking. Dominic Monaghan added nothing to the proceedings but acted as if all of this were so serious and important it slipped into spoof. Both Gleeson and Richard E. Grant as Allegiant General Pryde were hopelessly hammy, signaling they were fully aware of how awful all this was and not bothering to act. Grant in particular was hilariously awful, so much so that I actually started laughing every time he attempted to appear evil and menacing.
Fortunately for all of them, they weren't on screen long enough to completely humiliate themselves. 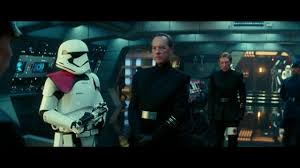 As for the main cast, I think Driver is the only one who not only made a genuine effort to take all this seriously but made it work. It is by now impossible for me to think of Kylo Ren as anything other than "Emo Vader", but Driver does work hard at trying to make the conflict between Ben Solo and Kylo Ren plausible.
Everyone else flounders.  Ridley looks unenthusiastic about things, Isaac plays him like a watered-down Harrison Ford as Han Solo (which to be fair, Poe Dameron essentially is) and Boyega can't seem to decide if he's heroic or bumbling. Again, to be fair to Boyega at least I put that more on Abrams as director than Boyega as actor, but it doesn't help any.
One feels for the late Fisher, who died before production could begin. They did as good a job as they could inserting unused footage to include her in the film and that aspect flowed generally well. One should cut them some slack for doing the best they could with regards to Fisher under very difficult circumstances.
The Rise of Skywalker rushes from one thing to another, throwing a lot at the audience but saying nothing. It simultaneously wanted to be fan service (such as the inclusion of Billy Dee Williams' reprising his role of Lando Calrissian) and move the overall story forward. However, it simply was trying too much for it to hold.
The Rise of Skywalker is a poor way to end this massive saga, but one hopes it is the end. No rise has ever fallen so hard.