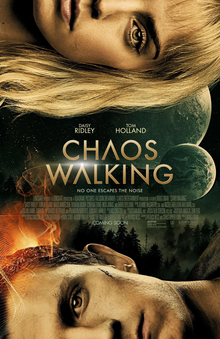 Sometimes what works on paper simply does not translate visually. Chaos Walking, the first of a young adult book trilogy, is one such example. Poor visual effects, dull leads and at times a nonsensical story scuttle any hope for adapting the other two novels into what I figure was a hoped-for cinematic project.

In 2057 AD there is a community of only men on an Earth colony called New World. Here, the men's thoughts, memories and fantasies are visible to all. The youngest man in the community of Prentiss Town, Todd Hewitt (Tom Holland) finds controlling what is called "The Noise" impossible. "Hide/Control your noise," he keeps telling himself with no success.

More successful is Mayor Prentiss (Mads Mikkelsen), who is able to shield his thoughts from everyone, even his son Davy, Jr. (Nick Jonas). Todd has resigned himself to outliving the world he knows, until a stranger comes his way.

It takes nearly 50 minutes to learn her name: Viola (Daisy Ridley), a young woman part of an expedition to bring new settlers to New World. Her ship crashed, and Todd is astonished to find a female. Worse, on New World female thoughts cannot be read.

Insert your own jokes here.

Mayor Prentiss and the crazed Preacher Aaron (David Oyelowo) want "Yellow Hair" or "Space-girl" killed for separate reasons (I did mention it takes almost an hour to learn her name). Todd's two adoptive fathers Cillian (Kurt Sutter) and Ben (Demian Bichir) urge him to take her to another community for safety, but the crazed menfolk are determined to make all-out war to stop them. Todd learns the shocking truth about why there are no women in Prentiss Town, and now he and Viola race to save themselves and the incoming settlers. 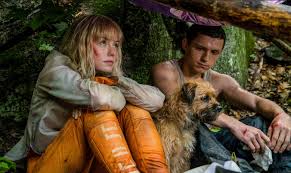 One cannot blame the failure of Chaos Walking to its adaptation. One of the credited screenwriters is Patrick Ness, upon whose novel The Knife of Never Letting Go the film was based on (Christopher Ford being the other screenwriter). One therefore can imagine that Ness had at least some say in how his story was shaped, but Chaos Walking does not suggest he is a good writer.

Chaos Walking has, at least to me, elements from Beneath Planet of the Apes, The Maze Runner and even Children of Men. You have the isolated community where people can communicate with just their minds (Beneath Planet of the Apes). There's the isolated men-only community where the appearance of a female brings chaos, exploration of the outside and a hunky male lead (The Maze Runner). Finally, you have a hope of new life via a hereto unknown community on what appears a dead world (Children of Men).

As a side note, it does not help that Ness also created and wrote the Doctor Who spinoff Class, a disastrous YA effort that went nowhere. I bring this up because Chaos Walking, like Class, can be read as another effort at muddled allegory that ends up looking at best confusing at worst idiotic.

There's a great deal in Chaos Walking that doesn't make sense. These men can see and hear each others' thoughts but couldn't hear either the sonic boom from Viola's spaceship or the crash? She had time to bury her crewmates, so how long was she actually on New World before she was found out? Other communities know of Prentiss Town so why does Todd appear the only person on New World to not know there is life outside? How is it that Todd continues to keep thinking out loud when he could easily just use actual words? Todd has never seen a female yet quickly fantasizes a kiss and erotic fascination? 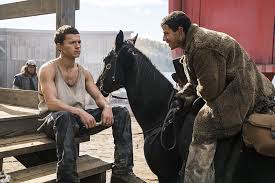 As another side note, while we learn the Prentiss Town men killed the women due to their anger or hatred or resentment that the women could hear their thoughts, what exactly did they do when an erotic desire swept in? I'm no expert in sexual studies, but I figure even the Prentiss Town community had urges that they'd want met. Fortunately or not, we'd never get to see a Nick Jonas/Tom Holland sex scene where they'd unleash their carnal desires with the only outlet available. That does lead to a somewhat confusing element involving Todd's two dads. Were they just friends, or friends with benefits, or lovers, or soulmates?

All those sorts of questions won't be answered, as Chaos Walking ends up confused about itself, and no that's not some kind of pun.

The small audience who saw the film with me found a lot of it funny, though I don't think it was meant to elicit laughs. Most of the unintended humor came from Holland, or rather Todd's massive idiocy. He's thick as a plank, and it was his thoughts that caused the laughter. Everything from his nicknames of "Yellow Hair" and "Space-Girl" to such thoughts as "I like her hair. She's pretty" made people laugh out loud. While we did have the obligatory shirtless shot for Holland, the oddity of him stripping off in front of her but insisting on bathing fully clothed was another sign of how confused this is. 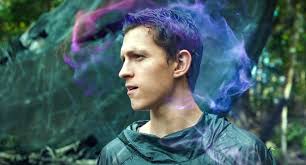 Was he so naïve that he was unaware of the differences between men and women? If so, why then can he figure out kissing so quickly? Holland is a good actor: his performance in The Impossible testifies to his abilities. However, ever since he became Spider-Man in the Marvel Cinematic Universe, Holland has apparently carved a niche in playing idiots, and Chaos Walking continues that tradition.

Him looking like he's wearing a trash bag does not help.

Ridley looks bored through it all, as if desperate to get out of both New World and Chaos Walking. She and Holland have little chemistry to where the idea anyone would want to see three films of Todd and Viola seems almost unhinged. Jonas, desperately working to build up a film career to coincide with a musical one, to his credit wasn't on screen long enough to embarrass himself. To be fair, his character had nothing to do, so much so that after Mayor Prentiss meets his comeuppance Davy, Jr. pretty much disappears. Bichir and Mikkelsen too decide to slum it and take the cash.

Oyelowo went the opposite route, going so bat-crazy with his Preacher it went into an almost spoof of "crazed preacher".  Whether he just went crazy or was already crazy to begin with is another element that will not be answered. The film was also a waste of Cynthia Erivo as the distant community's Mayor. Whether the counterpoint between "crazed white man" and "rational black woman" as competing Mayors was intention or not I can't say, but the opening is there if one wants to see it that way.

Chaos Walking was also brought down by lousy visual effects. Everything from the thoughts that appear to their one encounter with a Spackle, the native inhabitants of New World, looked bad. About the only thing of note is Marco Beltrami and Brandon Roberts' score, and even that wasn't memorable once you finish the film.

With all that said however, I found Chaos Walking a delightful disaster, almost a "so bad it's good" type. Maybe in the books the whole scenario works better, but in the film it looks like there wasn't much thought into things.