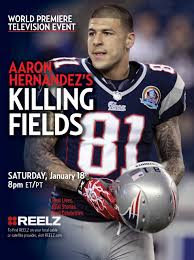 In many ways, the Hernandez saga is the blending of its two main subjects. The network that veers between such shows as the true-crime themed I Lived With a Killer, Copycat Killers and World's Most Evil Killers and the celebrity themed The Price of Fame, Behind Closed Doors and Breaking the Band has featured Hernandez quite often. Quibble about its Hernandez-themed episodes of Murder Made Me Famous and Notorious given he was both famous and notorious before his conviction, but Reelz has done much work with this story.

Hosted by investigative reporter Dylan Howard, Killing Fields goes into all sorts of allegations that don't just cover the Odin Lloyd and Daniel de Abreu/Safiro Furtado murders, but also suggest he essentially was a serial killer pre-and-post Patriots. Killing Fields as part of its investigation produces two women whose family members may have fallen victim to Hernandez's reign of terror. The first is Corey Smith, a single father of two who was almost murdered by Hernandez while he played for the University of Florida. The second was Jordan Miller, whose murder may have been due to bearing a physical similarity to Lloyd.

Killing Fields speculates that Miller's murder may have been a case of mistaken identity, while Smith's case had similar circumstances to the Abreu/Furtado case where perceived disrespect at a club led to a shooting. In a curious twist, the Smith case involves the curiously named Pouncey twins, teammates of Hernandez who were his de facto henchmen. 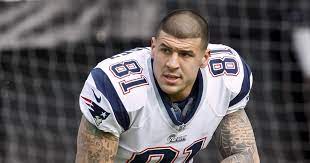 Mixed into an already expansive and sleazy story we have the shadowy testimonies of two new witnesses. There's "Q", who claims to have been Hernandez's drug dealer and "Chad", a male stripper hired by Hernandez for his own entertainment that overheard Hernandez planning to kill Lloyd.

Killing Fields also hired three "elite group of investigators" to delve further into the case. There's homicide detective Michelle Wood, "elite undercover agent" Don Jackson and ex-police detective Bo Dietl. Among their tactics is to rent out Hernandez's former home to do their own search for the missing murder weapon. While this Al Capone's Vault-like search didn't turn up the gun used to kill Lloyd, it did turn up some drugs stashed in the ceiling.

Despite several teases about what was discovered, we don't get much, but we do get the testimony of Kyle Kennedy aka Pure. In the words of Howard, Kennedy was "Aaron Hernandez's drug dealing lieutenant in the same Bloods gang that Aaron lorded over in prison. He became Aaron's business partner, second in command, best friend, confidant and lover". If Kennedy is to be believed, he wasn't merely Hernandez's sexmate to release his sexual energy. Aaron Hernandez wanted to marry Kyle Kennedy!

Aaron Hernandez's Killing Fields so far is the worst of the Hernandez coverage. Howard comes across as slightly pompous, making grand pronouncements while titillating audiences with such elements as male strippers and hopes to find the gun in a place one imagines had been thoroughly searched. Said stripper "Chad" was found via Howard "through our own internal investigation", but one wonders how they came upon the idea to search for some exotic dancer to begin with. The cloak-and-dagger manner of the interview ("Chad" in a hoodie and possibly false beard with his mask in darkness) gives the whole thing either a need for secrecy or almost comedy. 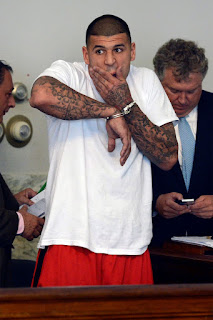 Add to that some pretty wild statements. "Chad" claims to have come upon "kilos" of cocaine and a gun, unaware of who had hired him until he saw the various Hernandez jerseys and photos matched the client.

As a side note, we never did hear if "Chad" gave anyone a lap dance, though we do learn that Hernandez allegedly had him followed and paid him off to ensure his silence.

"Q" the drug dealer claims that he at least once held a drug deal with Hernandez in a cemetery in the dead of night. Somehow, midnight drug deals in cemeteries never struck anyone as a bit bizarre to say the least. It isn't impossible, but it still sounds a bit odd.

In short, "Chad", "Q" and Kennedy are rather unreliable witnesses, so why Killing Fields took them at their word with nary a pushback is puzzling. Kennedy's claims of sex with Hernandez are plausible given the appearance of Daniel San Soucie, who claimed a long-term sexual relationship with Hernandez in high school.

As another side note, Killing Fields may claim an "exclusive" with San Soucie, but the man seems to be in almost every Aaron Hernandez-related special, so one questions how exclusive it was.

Kennedy's other claims that Hernandez was in love with him and wanted to marry him, however, along with having a series of love letters, was too outlandish even for Hernandez's defense attorney Jose Baez, who asserts that Hernandez was gay or at the most bisexual.

Killing Fields doubles down on the "repressed homosexuality" angle too. Early on, we learn that Aaron apparently wanted to be a cheerleader but his father Dennis simply wouldn't hear of it. As to what the various motives for the various murders, there's all sorts of speculation. His sexuality? A brutally beaten brain? Desire to make his fiancee Shayana Jenkins rich? Or was there something more sinister?

Aaron Hernandez's Killing Fields is almost comical in how seriously it takes itself. Loaded with lots of speculation but very little evidence, it's close to exploitative. That is bad enough, but it's a terrible disservice to the families of Corey Smith and Jordan Miller. Smith's mother Sandra Hines and Miller's aunt Tara Davis deserve justice for their family. However, unless Aaron Hernandez's Killing Fields gets people to investigate these crimes, it leaves a terrible taste to watch them used in the same special where drug dealers and male strippers regail viewers with tales of midnight cemetery drug deals and unused lap-dances.