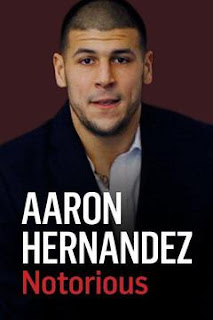 Reelz Channel's Notorious series was perhaps the first time the network brought the sad and sordid story of former New England Patriots tight end Aaron Hernandez to its viewers. To be fair I don't know if Notorious: Aaron Hernandez preceded Aaron Hernandez: Murder Made Me Famous or not. Quibble again if technically Aaron Hernandez was already "notorious" or "famous" before he was convicted of killing his friend Odin Lloyd, but Aaron Hernandez: Notorious sticks to the series' typical fare. It's a pretty dry reiteration of the Lloyd murder case, which in this case is just enough to get a primer on this case.

With mostly narration and a few interviews, the basics of the Hernandez murder spree is recounted. We learn that Hernandez despite his outwardly charming personality was pretty much a loner throughout his football playing career both at the University of Florida and New England. He didn't socialize with his fellow teammates like the more upper-crust Tom Brady or gregarious Rob Gronkowski. Hernandez also failed to follow the influence of people like the strongly devout Christian Tim Tebow.

It wasn't as if no one tried: coaches and other teammates tried by sharing their family lives and spiritual guidance, but to no avail. Hernandez simply preferred the company of thugs and criminals real or wannabes. The struggles Hernandez had all stemmed from the tumultuous relationship he had with his father Dennis. Dennis Hernandez was both feared and loved: abusive but adored. "If it s to be, it is up to me," he would tell his sons, saying that if they wanted something they had to get it. 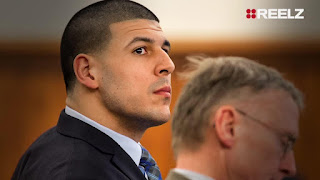 "With his volcanic rage and hair-trigger finger, Aaron Hernandez had become Notorious," the narration states. He had by the time of his arrest for the murder of Odin Lloyd already had a very violent past. The assault at a Gainesville bar when he refused to pay for a bar tab. The shooting of Corey Smith, a still-unresolved case where Hernandez was first identified as the shooter only to have the witness recant. The shooting of his former friend Alexander Bradley. The shooting of Daniel de Abreu and Safiro Furtado, both of which were connected to Bradley's shooting. The murder of Odin Lloyd.

As a side note, what was devout Christian Tim Tebow doing at a bar with an underage Hernandez?

Strangely, his time in prison served to mend the relationship with his mother Teri, though not fully. Surprisingly acquitted of the de Abreu/Furtado murders, he nevertheless committed suicide a few days later. More than likely his suicide was in the hopes of applying an obscure Massachusetts law that vacated a murder conviction if the defendant died before all his appeals were exhausted. Hernandez postmortem also was found to have massive CTE, which may also have played a hand in his erratic and violent behavior.

Reelz has featured Aaron Hernandez many times, almost to where it's become parody. There's been at least three Hernandez-themed specials. There was the sensationalistic Aaron Hernandez's Killing Fields. That was followed by the salacious Aaron Hernandez: Jailhouse Lover Tells All. Finally, there was the surprisingly restrained and rational Aaron Hernandez: Life Inside. Hernandez has also been part of three Reelz Channel programs: this one (Notorious), Murder Made Me Famous and Autopsy.

Notorious, as I said, sticks to a more grounded and serious level the program has. We do learn a few things, such as how father's words of wisdom influenced his son for good or ill. It also does not delve into Hernandez's complicated sex life. My guess is that his homosexuality/bisexuality was probably not well-known at the time.