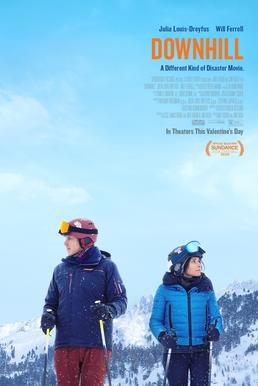 Downhill comes to us thanks to the American idea that Americans would rather watch a remake of a foreign-language film than the original foreign-language film itself. Adapting the Swedish film Force Majeure, Downhill might have forgotten something in the translation.
Married couple Pete (Will Ferrell) and Billie (Julia Louis-Dreyfus) are vacationing in the Austrian Alps with their sons Finn (Julian Grey) and Emerson (Ammon Jacob Ford) eight months after Pete's father's death. It's already not a particularly idyllic vacation for the Stanton family to begin with: Emerson is slow and uneager for winter sports while Pete and Billie get harassed by Eurotrash Charlotte (Miranda Otto), forever insisting on sharing stories of her various sexual escapades.
Things take an even worse turn when a controlled avalanche seems to swallow hotel guests eating outside. Billie huddles Finn and Em to her, while Pete leaves, taking only his cell phone. Once the danger passes, Pete returns and attempts to be casual about all this. Billie for her part has barely concealed rage. That rage bursts wide open when Pete's work friend Zach (Zach Woods) and his girlfriend Rosie (Zoe Chao) find their European travels take them there.
As the Stantons continue their own cold war, Billie is tempted by hot Italian ski instructor Guglielmo (Giulio Berruti) and Pete tries to overcompensate by attempting to ingratiate himself to the boys. Ultimately though, Pete and Billie reach a certain rapprochement, not happiness. 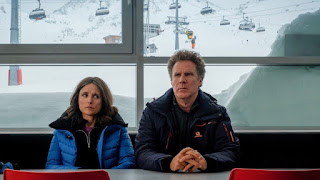 Downhill bills itself as "a different kind of disaster movie", which is probably not the best tagline for what is meant as a comedy. Perhaps this is one of Downhill's big problems: its inability to balance comedy and drama. It veers from what is meant as goofy laughs via Charlotte to terse drama when Billie drags their sons to confirm her story.
It goes all over the place, attempting to be laugh-a-minute at one point to cold the next. The cutesy choral score does not help clear up whether this is meant as comedy or horror film.
It does not help that you really can't side with either Billie or Pete. Co-directors Nat Faxon and Jim Rash (cowriting with Jesse Armstrong) apparently decided they could improve on the source material by introducing odd elements, such a potential fling with the hot Italian ski instructor or Eurotrash Charlotte. Perhaps this was to satisfy a need for the comedy they were aiming for, but what one ends up is two highly unlikable people.
As played by Louis-Dreyfus, Billie ends up looking like a whiny, boorish shrew. One figures that by the time they got to Austria she had already emasculated Pete so much that his flight reaction was more to get away from her than a stupid decision to save himself. Ferrell has mastered the art of playing dimwitted boobs, with his small eyes expressing perpetual confusion. However, even if one could forgive Pete's hurried decision to save himself, Downhill's insistence on him pushing his sons figuratively and literally is harder to accept. 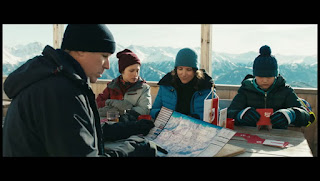 Downhill makes vague plays to rationalize Pete's decision by introducing the element of his father's recent death, but Billie brings it up and drops it at her convenience. It also makes some illogical choices. Whatever her anger, I think Pete would be right in being angry at her for her almost mercurial decision to make so many excuses for not getting on a helicopter trip that they miss it altogether. Pete at one point says it cost him $2,000 but she kept going on and on screaming about a lost glove that the helicopter was forced to leave without them.
I think Faxon and Rash were aiming for sadness but it ended up making her look like a screaming selfish harpy. One wonders why either would want to stay with each other. Pete and Billie's decision to take the boys to a more adult-geared resorts when a more family-inclusive one nearby also is a head-scratching decision.
In their smaller roles neither Chao or Woods impressed or seemed relevant to the plot.
Downhill has an odd tonal imbalance, wavering between attempts at comedy and attempts at drama. It fails in both respects, and it really is all downhill from the beginning.
DECISION: F
Posted by Rick at 3:00 PM