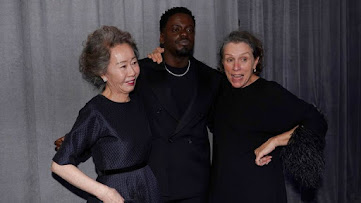 The 93rd Academy Awards reminded me of the Best Picture winner Nomadland: started out interesting then dragged, and dragged and dragged. Add to that one of the most disastrous closing moments and you had a muted feel to what is meant to be the highpoint of a year in film.
Much history was made last night. Let's hit some of them.
All but one of the Best Picture nominees won at least one Oscar. Only The Trial of the Chicago 7 went home empty-handed, losing all 6 of its nominations.
Best Actress winner Francis McDormand is one acting Oscar short of tying Katharine Hepburn's record four wins in this category. McDormand also won as a Best Picture producer.
Best Actor winner Anthony Hopkins at 83 becomes the oldest winner in any acting category.
Best Supporting Actress winner Youn Yuh-jung (Minari) becomes the second Asian actress to win in this category. Unlike the previous Asian actress to win here, Miyoshi Umeki for Sayonara, Yuh-jung won for a primarily Korean-language performance.
Yuh-jung's fellow nominee Glenn Close now has tied Peter O'Toole for the most acting Oscar nominations without a win at eight losses in total.
Best Original Song nominee Diane Warren has it worse. Her loss for the The Life Ahead song Io Si (Seen) is her twelfth loss with no win yet.
Nomadland's director, Chloe Zhao, is the second woman and third Asian director to win in this category (after Ang Lee and Bong Joon-ho).
Best Costume Design winner Anne Roth (Ma Rainey's Black Bottom) becomes the oldest female winner in any category at 89.
Best Hair & Makeup winners Sergio Lopez-Rivera, Mia Neil and Jamika Wilson (Ma Rainey's Black Bottom) become the first all-non-Caucasian winners in this category.
The record of the Best Film Editing winner (Sound of Metal) ending up losing to Best Picture to a fellow Film Editing nominee (Nomadland) continues for the eighth year.
There were a few genuine surprises. I don't think anyone expected Mank to win outside Production Design, so its Cinematography win over the heavily-favored Nomadland led Film Twitter to audibly gasp. Most people, I think, also didn't think Sound of Metal would take anything outside Sound, so its Film Editing win was also a surprise. Best Original Song going to Judas and the Black Messiah's Fight For You may have surprised, but this category never had a favorite or frontrunner. However, it says a lot about this year's Oscars when the biggest upsets were in Live-Action and Documentary Shorts (Two Distant Strangers and Colette respectively).
Most winners were expected, so even the highly divisive Best Documentary Feature winner My Octopus Teacher wasn't a surprise. However, it was near the end that things fell apart in spectacular fashion.
This year, the Academy Award producers Jesse Collins, Stacey Sher and Academy Award-winning director Steven Soderbergh, with the Academy's blessing, opted to restructure the award presentations. Some elements worked (not cutting off speeches), some did not (having clips for a few categories but not for the acting ones). Why exactly Best Documentary Feature had clips of the nominees but Best Actor didn't is a puzzling and curious choice.
Other elements drew tedious to the small audience who braved the entire presentation. Presenters waxing rhapsodic about each nominee's history soon lost its luster and become both rote and boring. However, it was the final three awards that made the 93rd Academy Awards a fiasco that somehow has eclipsed the La La Land/Moonlight chaos as among if not the worst final presentation in the Academy's history.

Since time immemorial the final award is Best Picture. For reasons still unclear it was decided that the final three awards would be Best Picture, Best Lead Actress and Best Lead Actor. Once Nomadland was announced as Best Picture the entire affair had an anticlimactic feel, as if we were done. I figure some viewers probably changed the channel to the more competitive and suspenseful San Diego Padres vs. Los Angeles Dodgers baseball game. Instead, it went for a "Hollywood ending" that blew up spectacularly in their faces.
It was highly expected that the late Chadwick Boseman would win for Ma Rainey's Black Bottom, a sentimental wave carrying him to victory. The Academy and the award producers could see how it would all play out: a standing ovation for someone taken much too soon, a weeping widow accepting an award her late husband had a very good chance of winning had he lived, a beautiful, iconic crowd-pleasing feel-good moment. Television viewers would have had a beautiful end credit scene.
Instead, a very unenthusiastic Joaquin Phoenix unenthusiastically, almost catatonically, read Anthony Hopkins' name for The Father before unenthusiastically accepting on his behalf and the entire show ended almost abruptly (and probably unenthusiastically).
Immediately pundits and Boseman fans began howling with rage, going so far as to attack and belittle Hopkins for committing the horrible sin of winning. Unsurprisingly racism was thrown about to explain this loss. People were angry that Hopkins had won over Boseman, and things grew to almost idiotic levels. "Why didn't Hopkins give a speech?!" the Boseman group howled. "Why didn't Hopkins show up?!" they bemoaned. 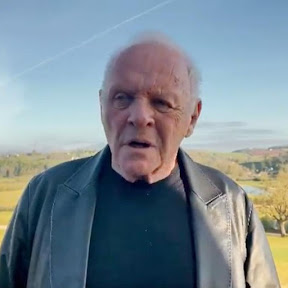 The concept that an 83-year-old man could be asleep at 4 A.M. in his Wales home versus opting to fly in to a COVID-infected area when so many people (including probably himself) thought he had little to no chance of winning somehow escaped those enraged over something said 83-year-old man had no control over.
As shocking as it may be, Anthony Hopkins had no say in whether or not he won an Oscar.
Worse, those whose emotions ranged from being "in shock" to "devastated" over Boseman's loss either never saw The Father or let their feelings for Boseman blind them to a sad fact: Best Actor was highly competitive. Anyone who saw all five nominees and was honest with him/herself knew the race was between Boseman, Hopkins and Sound of Metal's Riz Ahmed. Many were reporting that voters were checking off Hopkins because they "knew" Boseman was going to win anyway, a warning sign that Glenn Close supporters willed themselves into ignoring last year. Those who do not learn from history...
Hopkins had as good a chance of winning as either Boseman or Ahmed (Mank's Gary Oldman and Minari's Steven Yeun were highly unlikely to win). Finally, and perhaps most shockingly, Anthony Hopkins gave a brilliant, devastating performance in The Father.
It wasn't as if Chadwick Boseman lost to James Coco.
I confess that I would have voted for Hopkins over Boseman, though it would have been an extremely difficult choice. I wavered between them and Ahmed, but I ultimately decided that while Boseman was brilliant in Ma Rainey's Black Bottom, he was still "acting". His performance seemed stubbornly stagey, as if he was acting on the stage. Hopkins was "being" as this proud, stubborn but ultimately lost and pained man. Ahmed, Boseman and/or Hopkins were all worthy of a win, but that it was ultimately Hopkins was and should not be seen as a slam or rejection of Boseman.
Too many pundits wanted Boseman to win because it would be "the last chance" to honor him. I'm not big on turning a category into a de facto Lifetime Achievement Award, which is what those pulling for Boseman seem to have wanted. Yes, Chadwick Boseman gave a sensational performance in Ma Rainey's Black Bottom, but sentiment alone is not a reason for someone to win an Oscar. Would there have been the outrage we've seen if a living Boseman had won over a living Hopkins or a dead Hopkins had won over a living Boseman?
Anthony Hopkins deserved to win. He did not "steal" anything from anyone. To say otherwise, especially after Hopkins' classy and brief acceptance speech where he paid tribute to Boseman is disgusting. Toxic fandom hits new lows when people feel free to beat up on an 83-year-old for winning for a performance said fans probably haven't even seen. 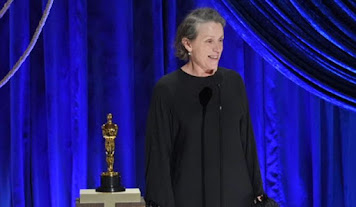 In retrospect, it's more boggling that the Academy opted to have Best Actor presented last when Best Actress was the more competitive and suspenseful category. Best Actress simply had no frontrunner. It was anyone's guess who would win. One day it was Promising Young Woman's Carey Mulligan who had it in the bag. Next day Ma Rainey's Black Bottom star Viola Davis was about to make history as the second black Lead Actress winner. Day after that, The United States vs. Billie Holiday's Andra Day could also be the second black Lead Actress winner.
Instead, it was McDormand, and her accepting right after accepting Best Picture felt bizarre, almost uninteresting, anticlimactic.
It seems more and more clear that the Academy and producers thought Boseman would win and wanted to end on that note. It was a cynical use of a late beloved actor for a "big moment" versus actually focusing on those nominated. This disastrous moment will haunt the Academy for years to come.
Speaking of those no longer with us, the In Memoriam was shameful. Playing at what looked like double speed, the Academy rushed through the montage to where it was almost impossible for viewers to match the name with the face, let alone their accomplishments. In a year we lost one of the last figures of the so-called Golden Age of Cinema (Olivia de Havilland), to give her 3 seconds of remembrance is galling. The use of Stevie Wonder's As isn't to me horrifying or in bad taste. Dubious, yes, but not monstrous.
However, given the hyperdrive In Memoriam followed a bizarre comedy bit about Best Original Song nominees/winners trivia that concluded with Glenn Close shaking her money-maker to Da Butt, it seemed so tone-deaf and coarse. The Academy should really just hand over In Memoriam to Turner Classic Movies, which manages to give the honored dead both time and context.
The 93rd Academy Awards started well only to slowly speed up to a rushed, chaotic and disastrous finish. And I'm sure the Academy of Motion Picture Arts & Sciences will wonder why ratings continue to fall.
Posted by Rick at 3:09 PM