"Garbo Talks!" That was the selling point in Anna Christie, as Greta Garbo, the Swedish Sphinx, finally was heard on film for the first time. A bit daring if stage-bound, Anna Christie still holds up surprisingly well.

After a nearly fifteen-year absence, Swedish sailor Chris Christopherson (George F. Marion) is going to see his daughter Anna (Garbo). Anna thinks her estranged father has moved up slightly in the world, but instead she finds he still sails on a tugboat despite his constant condemnation of "the old Devil Sea".

Despite Chris' duplicity Anna soon takes to the seagoing ways, serving as unofficial shipmate and restoring their relationship. It isn't until they rescue Irish sailor Matt (Charles Bickford) that there is trouble. Chris is distressed that his daughter would fall in love with a sailor, fearing the worse for his virtuous daughter.

Little does Papa Christopherson know that Anna has a past. Like Chris' discarded mistress Marthy (Marie Dressler), Anna has worked in the world's oldest profession to keep body and soul together. Anna's past in a Minnesota brothel is something she keeps secret, fearing her shame will drive both men away. At last though, she tells them the truth, and after both men struggle with the news, things sort themselves out with Matt not reneging on his proposal and Chris embracing his daughter and future son-in-law.

MGM executives despaired that Garbo's Swedish accent would cost them their biggest star. They had seen other silent film stars, both foreign and American, fall due to either their accents or their voices. Here, they found the perfect material to allow Garbo to have an accent, but would audiences respond to both said accent and her voice?

The answer is a firm "yes" on both counts. Anna Christie, daughter of a Swede brought up by Swedes, should have an accent. Truth be told however, I found her English quite strong. Apart from saying "yob" for "job" I didn't find Garbo's accent that strong as to make her unintelligible. Her speaking flowed quite smoothly, and soon you find the novelty of Garbo speaking, let alone speaking English, wears off. She sounds excellent and speaks quite well.

Garbo's low, sultry voice also added to her performance. It made it plausible for her to be this alluring woman to be a former hooker despite looking no less for wear. She seems almost too elegant to have plied the same trade as the more dowdy, frumpy Dressler, but that husky voice makes her first line, "Gimme a whisky, ginger ale on the side...and don't be stingy, baby," blend allure with a sad world-weariness.

Overall, Garbo's performance in Anna Christie is excellent. She shows true love to Matt, genuine affection for Chris, and even hints of regret and fear when Matt tries to send Marthy away. Near the end it does become a bit theatrical, but given that Anna Christie still has some of the early sound film limitations of single set scenes and limited camera angles that can be forgiven. 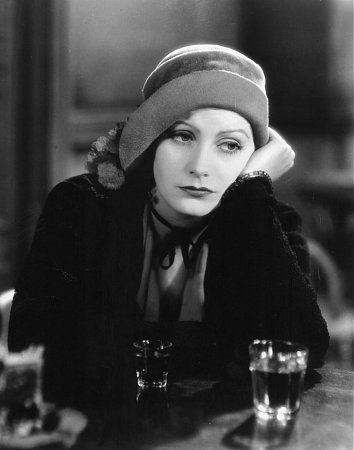 Despite the struggles of early sound films, we see that Anna Christie did take surprising steps technologically. A sequence where Marthy and Chris walk to the bar is an extraordinary one, with both dialogue and street sounds coming through. The scene at Coney Island where Anna and Matt are on the roller coaster too show that director Clarence Brown were making efforts to break away from whatever barriers they faced. The roller coaster ride may not have the fluidity we are used to, but it was a bold step to film it without a rear-screen projection.

Anna Christie also has mostly strong performances from the cast. Had the category existed Marie Dressler would almost certainly been a Best Supporting Actress nominee for her performance. In turns comic and tragic, Dressler's Marthy elicits sympathy and laughs in equal measure for her drunk tramp. She dominates her scenes with Marion and is more than equal to Garbo when they share the screen. Her drunk moments were funny, but her farewell to Garbo on Coney Island is deeply moving.

Marion's Swedish Papa was strong and effective, also in turns funny and serious. It's a curious accident of history that he could either be "Chris Christopherson" or if we go by Anna's nom de guerre "Chris Christie" but I digress. I admit finding Bickford's Irish rogue a bit hard to believe, but that is a minor point.

Anna Christie is a bit stagey and it has title cards which show how it might have still been shown as a silent film. On the whole however, it is a good film that holds up well.