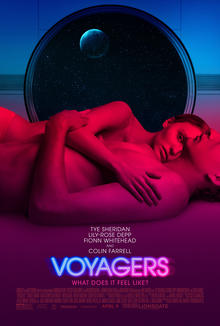 VOYAGERS
Is it a good or bad thing to say that a movie isn't terrible? That's what I can say about Voyagers. "It isn't terrible". A film that could have been better if it had taken some chances, Voyagers is passable fare but a bit frustrating in how it could have been more.
In the year 2063, if man is still alive, we find that climate change has gotten worse, so much worse that it requires a search for a new planet. Such a planet has been found, but it will take 86 years to get there. To circumvent the unfortunate aspect of traveling such a long time scientists genetically engineer humans who will be raised on the spaceship, breed in space, and then have their grandchildren colonize this new world.
I asked myself why not spend all that money they used on the spacecraft, selective breeding and raising these kids on climate change solutions instead, but whatever.
Going up with these space tykes is Richard (Colin Farrell), disillusioned with life on Earth One who will act as father-figure and mentor on the spaceship Humanitas as the children grow, with them now as teens.
I asked myself why did anyone think that sending only one adult into space with children who would be far too young or small to handle things should anything go wrong was a good idea, but again, whatever.
The teens are drugged daily with "The Blue" a drink that suppresses their base instincts to make them docile and keeps their hormones in check (presumably until they are of age to breed the children whose own children will colonize the new world). 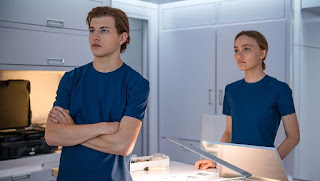 At this point, Drax's whacked-out scheme in Moonraker is sounding more rational.
Two of our teens, friends Christopher (Tye Sheridan) and Zac (Fionn Whitehead) discover The Blue's secret and secretly opt out of drinking it. Soon, their male aggressions and desires soon start emerging, and those desires lead to Sela (Lily-Rose Depp), the Medical Officer who has a close bond with Richard.
Once Richard is out of the picture a power struggle emerges between calm, rational Christopher and power-mad Zac, splitting the small group of teens into two camps. As they have all stopped drinking The Blue, no surprise that things like sexual desire and fierce fighting start breaking out left right and center. Everyone on the Humanitas believes an alien has entered the ship, but that is in doubt, perhaps an excuse for Zac to launch a coup d'etat against the duly elected Christopher.
The aggressions and lusts in space reaches a fever pitch until order is finally restored, with eventually the original plans brought back as the descendants see the new world at long last. 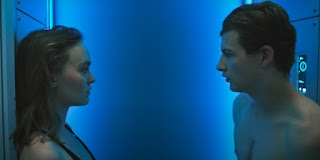 Many but many people have seen the parallel between Voyagers and Lord of the Flies to where it's a surprise writer/director Neil Burger does not literally give a story credit to Sir William Golding. The kids descending into chaos once adult supervision, isolated from society, is gone. The power struggle between two alpha males. A mysterious outside force as a danger. The killing of other members to hold on to power.
Seriously, all that was missing was a conch. Voyagers might as easy been titled Space Lord of The Flies. The only major change was the addition of women, and that didn't make Voyagers any better.
The women here were more objects of lusty desires than anything else. Even Sela, ostensibly the most rational of the group, had little to do apart from getting her boobs felt up by Zac (a moment that will either startle or cause laughter to viewers) or engage in PG-13 touching with Christopher. To keep that PG-13 rating, Voyagers had to fade to black before we saw Christopher and Sela indulge in the pleasures of the flesh, and even when we return to them, we see they kept their underwear on.
One wonders how if things had kept to the original plans, any of these kids would have managed sex, let alone such things as the inevitable child rearing.
Other problems that have been pointed out by others is that in Voyagers, the minority characters are either minimized or killed off and for all the unleashed decadence none of these kids find any same-sex attraction. I don't know if having the black or Indian characters take charge or seeing Christopher and Zac taste each other's forbidden fruit would have improved Voyagers, but it would have been a nice change of pace. I don't think the killing of the minority characters or lack of homosexual characters was intentional but given the times we're in now the suspicion that it was hovers over the film. 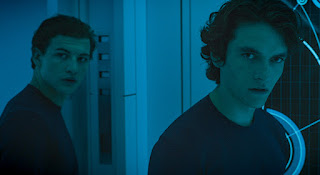 Perhaps Voyagers' biggest problem is how serious it all is. There's a catatonic nature to everyone's acting that they look and act like zombies. Up to a point that's understandable as they are initially drugged, but that doesn't explain why Farrell's Richard can't seem to crack a smile and behaves just as zombie-like as his wards. Even after they are off The Blue, this group of hot pretty young things look so dull and emotionalless.
The exception is Whitehead, who chews into Zac's sudden and unexplained villainy with relish. I don't blame him as Zac is the only member of our runway model cast that is allowed to have anything close to emotions. I love Tye Sheridan as an actor, but Voyagers has to be among his worst performances. He was called to be a leader and heroic, but he looks so unhappy. Depp, attempting to ignite her own career following in her father's footsteps, similarly looked flat.
To Voyagers' credit the production design kept to a futuristic spaceship aesthetic of clean bright white corridors, though at times the special effects department got carried away with showing the speed it could travel down said corridors. The score too had some moments, though sometimes it blared too much and other times it was missing when the film could have benefitted from some music.
Voyagers could have been more, better, if it had taken some risks or not gone familiar routes. Again, all I can say is that Voyagers isn't terrible. It's serviceable, but among all its faults, that teens in space can be so tame when exploring carnal desires has to be the most outlandish element in Voyagers.
DECISION: C+
Posted by Rick at 2:15 PM