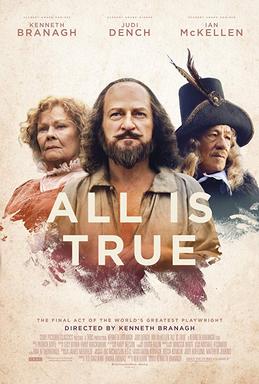 The play may be the thing, but All Is True dives into the man behind The Bard. As William Shakespeare comes to terms with his legacy artistic and familial, All Is True is a pleasant homage to him, albeit one that was a bit dry.

After the Globe Theater burns to the ground its owner, William Shakespeare (director Kenneth Branagh) goes home to Stratford-upon-Avon to rejoin his family. His years of absence, coupled with the early death of his only son Hamnet, has alienated him from the survivors. His wife, Anne (Judi Dench) has him sleep in the best bed rather than their formerly shared second-best one. His spinster daughter Judith (Kathryn Wilder) is bitter towards her father for favoring her dead twin. His married daughter Susanna (Lydia Wilson) is stuck with the Puritan John Hall (Hadley Fraser), whose forced piety makes her extremely unhappy.

William soon starts tending a garden, contemplating his life along the way. Visits from patrons and friends, such as the Earl of Southampton (Ian McKellen) and Ben Johnson (Gerard Horan) give him pause to think that perhaps he won't be forgotten. He also manages to stand up to Stratford bully Sir Thomas Lucy (Alex Macqueen), who has stomped upon the Shakespeares for two generations, and made amends with his family and its past. Judith finds happiness with rakish Tom Quinley (Jack Colgrave Hirst) and at last the Sweet Swan of Avon can put aside the cares and troubles of his soul before he too like chimneysweepers comes to dust. 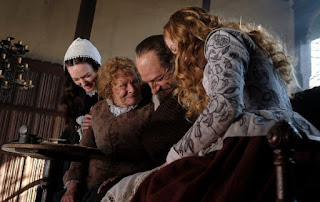 Perhaps the biggest issue with All Is True is in how the film is staged. Good or bad, right or wrong, Branagh decided to have little cutting within scenes. As such, we get essentially a filmed play. There's a bit of unimaginative visuals in All Is True, which is surprising given how much freedom film can bring.

There are very few scenes that have any genuine passion in them. Instead, for most of All Is True there is a sense of excessive, almost stiff formality. Up to a point that can work given how tightly wound up the family dynamics are. However, even when Judith finally lets herself go with Tom it feels a bit remote, as if it was more acting than being.

The only genuine moment All Is True perks up from this somewhat somber tone is when McKellen rides up to pay a call on one he considers the son of Apollo. There's a wit and joy and veiled sarcasm as Southampton puts Sir Thomas in his place. This was a moment where Ben Elton's screenplay gave the film a spark, a life, but it was sadly a brief respite from the rather formal structure of All Is True. 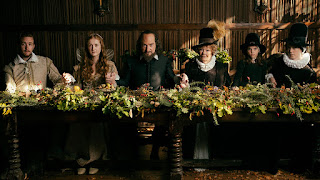 This does take away a bit from some strong performances. Quibble about the illogic of casting people of the wrong age for the roles, but Dench and McKellen were delightful as Anne and Southampton. Dench kept to the formal manner the film had, but she also showed a warmth that came as she slowly reconciled with her husband. McKellen clearly stole the show in his much too brief role of Southampton, forever hedging on whether he was the handsome man of the sonnets.

Branagh, perhaps the most vocal Shakespearean champion of our age, brings the conflict of William Shakespeare the man. His Will is haunted, sad, but also made aware that he has brought real magic to people. Standing up to Sir Thomas shows now a man in full, not afraid of his legacy or his future.

All Is True is a bit too formal in its telling of the Artist as an Old Man. However, it has just enough in it to make one wonder about the man who gave us so many brave new worlds.