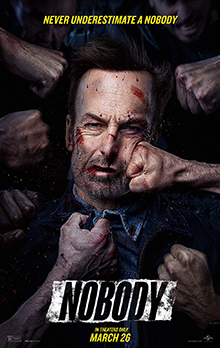 It's one of television and film's greatest surprises that the co-host of the comedy Mr. Show has somehow ended up the master of dour male angst. Nobody is fully self-aware, not original but fun.

Mild-mannered Hutch Mansell (Odenkirk) lives a quiet life with his wife Becca (Connie Nielsen) and children: teenage Blake (Gage Munro) and adorable pre-tween Abby (Paisley Cadorath). Forever pushed around and pushed over, not even a break-in at his house can make him turn violent.

However, things are not as they appear. Far from being a perpetually beaten up guy Hutch is really a retired government assassin who has embraced the quiet life. It isn't until Abby remarks that the thieves probably stole her kitty cat bracelet that Hutch finally resorts to his past to get it and some of his self-worth back.

However, after realizing the thieves were a poor family, Hutch's guilt mixes within him. That is, until a group of thugs harass fellow bus riders, unleashing a wave of violence and mayhem that eventually engulfs Russian mob kingpin Yulian (Aleksey Serebryakov), Hutch's seemingly fragile father David (Christopher Lloyd) and his half-brother Harry (RZA).

Nobody does not pretend to be anything new. You get quick montages that show the life of drudgery Hutch lives out. Hutch's accidental involvement with the Russian mob is similarly unoriginal. Yet Nobody is not looking to be original in its brisk 90-odd minute running time. The mixing of soft music to violent action is equally nothing that hasn't been done before. A dramatic fire is accompanied by Louis Armstrong's What a Wonderful World, and the climatic gunfight has people blasting each other away to Rogers & Hammerstein's You'll Never Walk Alone.

About the only genuinely original idea is a literal Black Russian in the form of Pavel (Araya Menshega), Yulian's right-hand man who surprises the fellow Russian mobsters by speaking fluently in their own language. 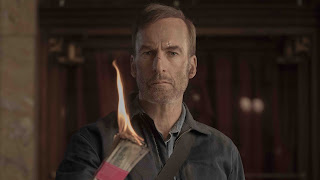 However, in terms of action Nobody certainly delivers. It boggles the mind to see 82-year-old Lloyd taking out two Russian hitmen, then joining his sons for that climatic battle, but Nobody makes it if not plausible at least enjoyable. Other fight scenes such as Hutch on the bus and the raid on his home also balance between the action and a bit of humor without it being cartoonish.

Nobody's most successful element is in Odenkirk's performance. His world-weary looks and growly delivery show Hutch to be more worn down by his past and present than a man seeking violence or redemption. "We haven't had sex in months. We haven't made love in years," he tells Becca after the burglary, and there's a world of difference between having sex and making love. Derek Kolstad's screenplay allows for these little bits of domestic drama to seep through.

On a certain level, Nobody could even be interpreted as allegory of how men have been so pressed down that the rage inside finds a release in literally striking back against dismissive in-laws or self-satisfied neighbors. There's a strange sort of wish fulfillment in being able to beat up on the brother-in-law who belittles you or the guy next door forever bragging about his car (which you help yourself to). The allegory could extend to fathers and sons: David and Hutch are similar, while Hutch and Blake are not. Blake has little to no respect for his supposedly weak dad, but he may find himself in for a few surprises.

Granted, this may not be Nobody's goal to be almost the anti-"toxic masculinity" film but it's there if one wishes to see it.

Lloyd gives a twist to the "weak old man" character and while appearing only on-screen at the end, RZA too seems to be having fun saving, as he puts it, Hutch's "white ass". Given that David and Harry leave riding off into the sunset, one wonders if there will be a sequel or spinoff, both welcome if at the same absurdist standard as Nobody started with.

If there's a quibble, it's that it leaves Nielsen with little to do, which is a shame. On the whole though Nobody works for what it is: action with a bit of humor, not comedy but humor.