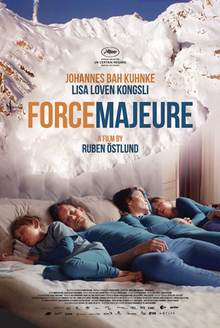 Into every marriage there will be found a few bumpy moments. Granted, not all of them will involve avalanches. Force Majeure looks at one seemingly happy family and finds that little things like life and death have a curious way of altering a relationship. Apart from its length Force Majeure is a strong, witty tale of a marriage in distress.

Swedish couple Tomas (Johannes Bah Kuhnke) and Edda (Lisa Loven Kongsli) are with their children Harry (Vincent Wettergren) and Vera (Clara Wettergren) in the Swiss Alps. It's a good way for the family to bond given how Tomas works too hard. Ski Day One of the five-day holiday went well.

A controlled avalanche at lunch appears to be anything but, causing panic among the hotel guests. Edda tries to both calm and protect the children. Tomas manages to flee the incoming chaos with only his cell phone, and from there comes all the trouble. Edda cannot comprehend why or how Tomas ran away in his ski boots, while Tomas insists it did not happen the way she tells it.

For the rest of the holiday, Edda and Tomas struggle through their own reactions and responses to this unfortunate incident. Edda is in turns distressed, unforgiving and passive aggressive. Tomas is in turns miffed, defensive and remorseful. Oddly, this incident and their reactions to and about it affect their friends Mats (Kristofer Hivju) and his much-younger girlfriend Fanny (Fanni Metelius), who equally struggle with what it all means and how they would react.

Eventually, the last day is one where in the words of Tomas, "We made it". If only not for that little issue of inept bus drivers on the way back from the ski lodge.

It's at the very end of Force Majeure where it lost me, not completely, but enough to want this thing to finally end. It is about two hours long, and part of me thought that there could have been some cutting out of it. The long dialogue between Mats and Fanny, the oddball clubbing Tomas found himself in, the bus hijinks. At times it felt as if writer/director Ruben Ostlund didn't know when to stop. It did feel as if there were moments when we lurched from one point to another.

Again, the entire bus back bit made me wonder why this was added.

Apart from that though Force Majeure was both entertaining and intelligent. Ostlund did a wise thing in not making the actual avalanche into this massive moment. In fact, there is almost a clinical, documentary-like take on it, without commentary as the storm is about to engulf everyone. Ostlund, for example, does not cut from one shot as the avalanche comes at them (and us) closer and larger. He does not shift this cold point of view, and moreover, does not take sides. He leaves it up to the viewer to draw his or her own judgments.

Force Majeure is elevated with fine performances from our very tried couple. Both Kuhnke and Kongsli balance the drama with some moments of humor as Tomas and Edda respectively. Kunhke's best moments are the quiet ones, such as his stillness when he does see via his own cellphone video that he did run off. Afterwards, he has a scene where he crumbles and acknowledges his failings and it is a very moving piece of acting.

Kongsli for her part makes Edda into a woman who does love her husband but who also is perplexed by him, the sense of responsibility for the family falling hard on her. Whenever she recounts this incident, we can see the growing anger and numbness of it all but she never makes Edda into an unforgiving harpy. Instead, she too is flawed in her own way.

Force Majeure is a movie that has humor and heart, whether it's Tomas mistakenly thought of as "the best looking guy at the bar" or when he and Edda have their reconciliation on their distinct faults, flaws and failings. A bit too long for my taste, it still is worth the time to see how sometimes even the best of us fail in the most difficult of moments.