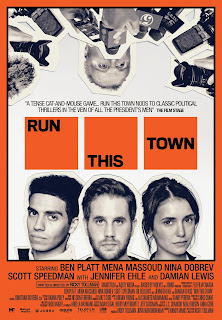 The late Toronto mayor Rob Ford was, shall we say, a very unique character. Whether his substance abuse problems made him bonkers or just enhanced his apparent lunacy I cannot answer. Run This Town thinks it's an exploration of the relationship between the media and the government. There is a story to be told here.

The problem is it doesn't seem to know what story to tell.

On one side, you have Bram Shriver (Ben Platt), aspiring Canadian journalist who manages to get a job at The Record, a local paper. He may dream of being the next Bernstein but is stuck writing out "Top Ten" Lists. It isn't until he answers a call meant for a recently laid-off Record reporter that he comes upon a major story.

Rob Ford (Damian Lewis) may be on videotape smoking crack. Explosive stuff, but both his immediate editor David (Scott Speedman) and editor-in-chief Judith (Jennifer Ehle) don't want Bram to do this story owing to his inexperience and unwillingness to earn his place. Nevertheless, he persists and despite many stumbles does get the story. Again, despite his best efforts he manages to get scooped and dumped/duped repeatedly, ultimately losing his Record job and having to interview at another location. Doing the interview? David. 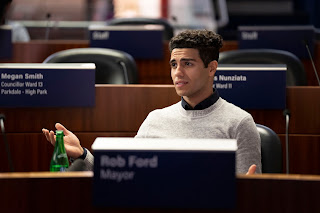 You'd think that would be enough, but Run This Town opted to have that story with that from the Mayor's staff as the impending scandal is about to break. Mayor Ford's Special Assistant Kamal (Mena Massoud) is cynical towards the press but he does have something of a soft spot for His Honor. Never mind that Rob Ford looks and behaves in manners both bonkers and brutal. He appears more involved in running his youth football team than running Toronto. He is generally outgoing with the public but can berate his staff. He appears drunk in the office, yells at everyone then proceeds to sexually assault Ashley (Nina Dobrev), another staff member.

Despite Ford coming across as genuinely insane, Kamal does his best to keep the incriminating videotape from the press, and surprisingly enough he does manage to outwit Bram, whom he doesn't actually interact with and barely meets at the end. However, he too carries the baggage of having worked for the Ford administration, finding it hard to find a job.

Run This Town, written and directed by Ricky Tollman, has a host of problems that would have benefited greatly with just some adjustments. At the top of the list is the script, which despite a surprisingly short running time of about an hour-and-a-half felt endlessly longer and more convoluted. I think it has to do with the fact that Run This Town has material for two stories: Bram and Kamal, but Tollman opted to slam both stories into one ill-fitting story.

Even worse, Run This Town had a shocking love for sounding and looking very quippy. By that I mean that just about everyone in the film did not so much speak dialogue that sounded natural but rattled off lines in rapid succession. From the get-go the film had everyone speak in a rat-a-tat manner that it quickly devolved into parody. Oddly though, the scenes at The Record played rather lethargic, as if Judith and David seemed almost bored at the idea of having a potentially explosive story about crack-smoking, sexually harassing drunk Mayors. 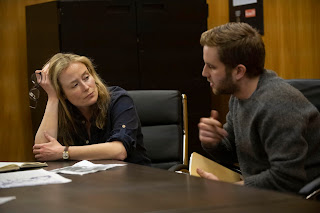 Worse was Bram, who seemed to try and spout out quips at everyone, even to his worried Jewish parents. To be fair Kamal's scenes with his mother, spoken in Arabic, sounded more human, but I think those were the only times that happened.

Run This Town has some weak to bad performances. Platt did not come across as a real person, but almost as a soft-spoken parody of a person. I figure his character was meant to be perpetually weak, almost wimpy, and nowhere near the idea of an aggressive or even ambitious crusading journalist. Much better was Massoud as Kamal, who seemed to have some struggle between his honor and his response to His Honor.

Ehle was wasted in the film, apparently directed to channel her inner Miranda Priestly whenever she was on screen. Moreover, as a side note I noticed something curious when she and Speedman, looking bored, were arguing about publishing the story. Judith says this is a "T-M-Zed" story, while David says "T-M-Zee". In short, we have one person using the Canadian pronunciation of the letter Z, another the American pronunciation, yet we got no indication David was American or if so, how an American ended up on a Canadian paper. It does sound confusing.

Lewis is unrecognizable as Mayor Ford, but that is no compliment. He is both a talented actor and yes, a good-looking man, but the makeup work makes him look freakish and unreal. I can see the "Fat Bastard" comparisons. Moreover, Run This Town makes Ford so bonkers without stimulants one wonders if his own pronunciation of Kamal as "Camel" is either him genuinely thinking that's how his name is pronounced or a flat-out racist swipe.

Run This Town has potential, but just the Mayor, it can't get out of its own way.