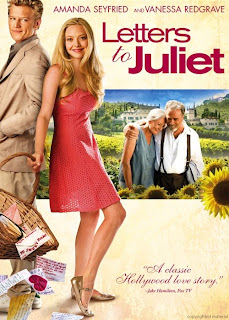 I'm still of an age where I remember being taught how to write letters. In fact, even as letters themselves, and even e-mail, are being discarded, some things just won't leave me. For example, whenever I write an e-mail for work I not only include a heading but go so far as to leave a few blank spaces between the closing and my name to indicate where the signature would go. Alas, no one writes letters anymore, what with text messaging destroying spelling today.

Letters to Juliet is the type of film that begs one to go back to the idea of love letters, and under normal circumstances, if the film had done a better job of going against a collection of cliches, it would have been a return to good romantic comedies. However, by relying on the safe and secure, it did itself a terrible disservice.

Sophie (Amanda Seyfried) is a young fact checker/aspiring writer for a magazine engaged to Victor (Gael Garcia Bernal) a cook who is thoroughly obsessed with his work. They go off to Verona, where Victor is entranced with the culinary opportunities for him and oblivious to Sophie's presence. He goes off to a wine auction while she stays behind in the setting for Shakespeare's Romeo & Juliet. While at the Casa Di Guilietta, she comes across a strange sight: a group of women writing notes & letters and placing them in the wall of the courtyard. This Wailing Wall for the Lovelorn* is watched over by a group of women who bill themselves as Juliet's Secretaries, offering replies to the various women in need of advise from a fictional character. She starts helping out to pass the time, and in due course discovers a fifty-year old note within the wall. Sophie is so moved by the heartache contained in the note that she writes a reply.

Less than a week later (we know this because we're told it's been less than a week) Charlie (Christopher Egan) a very irritated Brit, arrives in Verona. He wants to know what dumb woman wrote a response to a letter that brought his grandmother Claire (Vanessa Redgrave) back to Italy in search of her Lorenzo. He is extremely irritated that Claire is going on this wild hunk-chase, but Claire was so inspired by Sophie's note that she decided to rush to Verona and rediscover her long-lost love. With Victor conveniently away and uninterested in anything Sophie does, she asks to join Claire & Charlie on their search, thinking it might make good material for a story.

Claire agrees over Charlie's objections. They search high and low, running into countless Lorenzos until nearing the end of their journey, Claire finds a nice young hunk working in a vineyard. Though it's impossible, she knows it's Lorenzo, and in a sense, she's right. It's her Lorenzo's grandson, who calls his father, who then calls HIS father, riding upon a horse. THE Lorenzo (Franco Nero) instantly recognizes Claire, and their romance is rekindled. Of course, we can only imagine what happens between Sophie and Charlie: here's a hint: they start out hating each other. Story and romance over, Sophie goes back to New York where her story impresses her editor (Oliver Pratt in a cameo) so much she now gets to write full time. Sophie gets an invite to Lorenzo & Claire's wedding, and from there you can fill in the blanks. 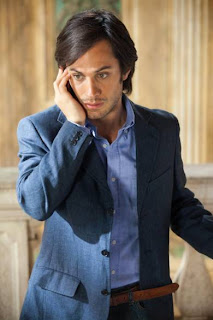 Letters to Juliet to its credit has such a generally sweet tone that we might have liked it for being a light film. It isn't trying for anything special or extraordinary: just to be a little romance about finding the right person for you regardless of how long ago it was or who it may be. However, that's part of the problem.

By not being original, and frankly, by not taking advantage of some good possibilities for the characters, it makes some of the characters pretty dumb or even downright crazy. Throughout the film we wondered why Sophie, who is supposed to be smart, would have even dated someone like Victor, who appears loving but totally disengaged and disinterested in what she does and in spending time with her, let alone be engaged to him. We wonder why Charlie is so implacably hostile to Claire coming to Verona to see if Lorenzo is still among the living. Claire, in fact, doesn't seem the slightest bit perturbed to receive a reply fifty years after the fact. In short, it's a pity the script by Jose Rivera and Tim Sullivan was so riddled with cliches, as if they didn't trust the audience to see something different and unique.

Letters to Juliet, in fact, is a compendium of cliches, which pushes the film down when you stop to think about things. Seyfried has a remarkably open and pretty face, particularly her eyes, that makes her appear totally believable as the optimistic-in-love Sophie. Oddly, it's her pretty nature that makes it hard to believe whenever she has to be hostile towards Charlie because she doesn't seem capable of disliking anyone.

Egan, granted, is pretty to look at, but it's hard to gauge how good an actor he is or could be since his Charlie is one note throughout Letters to Juliet: always irritated by everything going on. Therefore, we really don't see or believe he's gone through any change, let alone have fallen in love with Sophie. Garcia Bernal's Victor is of vague ethnic origin: while he handles English well, you can still tell he doesn't sound like a native speaker and at one point he asks Sophie 'Who are you?' when he meant 'How are you?'

While I suppose it's understandable why a woman would want to be with him: he is Gael Garcia Bernal after all, despite his Vulcan eyebrows and short stature, his disinterest in Sophie's life is inexplicable. Near the end, Victor blames her for being apart while in Italy; talk about clueless. Basically, Victor just served as a plot device to get Sophie to Verona and get the ball rolling. Redgrave is tottering through the film, and since she basically has one expression through the film I can see the family resemblance between Claire and Charlie.

While watching Letters to Juliet, I kept thinking how the film could have been improved if director Gary Winick and the writers had made just a few changes. Dump Victor: make Sophie single or at least merely dating him. Have Charlie enthusiastic at first only to get disillusioned by the journey. Make Claire have some doubts about coming to Verona. Why not make Sophie an American in Verona (which I was told is the City of Love, dethroning Paris, I suppose) who has grown cynical or suspicious of love.

If only a few things had been changed, Letters to Juliet could have been far better and original.

Granted, Letters to Juliet is a light fare, nothing offensive, only wanting to please and be loved. I get that. However, just because a film knows it isn't original or clever doesn't mean you have to like it for those flaws. You should be calling for it to do better.

Still, I can't be too harsh on Letters to Juliet because I know what it's going for. Therefore, I'm giving it only a slight reprimand, and ask it to do a rewrite.

DECISION: C-
*While I know that the term 'Wailing Wall' has fallen out of favor when referring to the last remnants of Herod's Temple and 'Western Wall' is the more current term, in this case the word 'wailing' seems to apply given the situation.
Posted by Rick at 9:32 AM