I find it hard to give a full review to Drive Angry because, at what I figure is the climatic moment where a child will be sacrificed to Satan, I did something that I haven't done in a movie since at least when I saw Alexander.


It was probably no more than a minute or two, definitely not five, but I did. I simply nodded off. A big explosion or noise woke me up, and when I started watching again, I saw a completely naked woman with a gun shooting at Nicolas Cage's car.

It doesn't sound any stranger the second time round.

What makes my unexpected slumber even more out-of-the-norm is that this wasn't some midnight screening I went to. In reality, it was a nine P.M. sneak preview, and in 3-D no less. How then could it have been possible that I managed to fall asleep in a 3-D action picture like Drive Angry? For the same reason I fell asleep at Alexander as well as The Matrix Reloaded (in IMAX no less).

It was simply boring to watch.

The parts I was awake for made me think that Drive Angry was in the style of a seventies drive-in midnight movie, something that a young Tarantino or Rodriguez would have flocked to while they learned the fine art of cinema watching 'grindhouse' films. Since those types of films passed me by, I don't think I could get into the spirit of this film; however, I wonder if Drive Angry was deliberately trying to be tacky or it was trying to be serious. How can one take a character having sex (fully dressed, no less) while blowing a Satanic cult away with his gun at the same time?

John Milton (Cage) is pursuing a group. Over the course of the film, we learn that this group is a cult, whose leader, Jonah King (Billy Burke), claims to worship the Devil and be his servant. King has killed Milton's daughter and kidnapped his granddaughter in order to sacrifice her to Satan. Milton is himself being pursued by someone who calls him The Accountant (William Fitchner), a being who appears beyond killing, always in a suit, and quite deadpanned (no pun intended).

Milton gains the aid of Piper (Amber Heard) to help him in his efforts. Eventually, we learn that Milton is no mortal. He actually is dead, has escaped from Hell, and is being pursued by The Accountant to be brought back. We get this information from Milton's good pal Webster (David Morse), who was one of his pallbearers. Eventually, Milton catches up to King at the climatic moment and takes care of business.

Drive Angry is junk from the word 'go'. The audience was impressed with the opening moments when we see what we later learn is Hell (and I'll grant you, they were nice to look at), but once we left one Hell we found ourselves going into another. With the name 'John Milton', I get a wild sense that director/co-screenwriters Patrick Lussier with Todd Farmer was going for something more intellectual than the story would have ever needed. John Milton escaping Hell, perhaps contemplating a Paradise Lost, may have been a connection that escaped some of the audience, but the name sounds rather grand for someone who is on a revenge quest. The main character's name is the least of Drive Angry's problems.

Simply put, Drive Angry is boring because there is a desperate rush to get going to the next big action/3-D scene. We really don't require any actual character development, especially since the film takes great pleasure in disposing of people all over the place. Granted, a film like Drive Angry is built on killings galore, but at a certain point we need to pull back to get some idea of who these people are, if not the victims who are going to get dispatched quickly, at least the protagonist and antagonist.

We don't. We didn't even know until midway into the film that Milton is really not alive. As Cage portrayed him, he was dead not just in body. No joy in Milton, and while I know he has a mission to do and an agent of Lucifer to stay one step ahead of, if you're not even going to enjoy the sex then why have it in the first place?

Also, this whole 'dead guy who has dealing with Satan' bit: hasn't Cage already done this? Wasn't it called Ghost Rider? We had someone who was escaping Hell, who was hunting down souls, and who true horror of horrors, was leaving the door open for a sequel. The difference I could see between Ghost Rider and Drive Angry is that the Accountant could be the Ghost Rider, but I felt these two Nicolas Cage features touch too closely for me to consider the latter truly original. Yet I digress.

Cage at this point doesn't appear to be a trailblazing actor, although I have yet to see Raising Arizona, Leaving Las Vegas, or Adaptation. His performance shows just how bored he is with all of this, on how he needs to be in films like Drive Angry to pay off whatever debts he might have incurred. At a certain point, he appears not to care what effect this film and those like them have on his reputation or box-office appeal. If Cage could have communicated some wry humor in Milton, we could have had some fun with Drive Angry (by the way, the title comes from Piper's license plates, or to be exact, her ex-boyfriend's license plates). If he was in on the joke, he didn't tell us.

This isn't to let anyone else off the hook. Burke already has those Twilight films to his credit in which with the possible exception of New Moon he's been awful in, so perhaps adding another lousy film to his résumé won't hurt him none. I can only hope it was his intent to ham it up to the Nth Degree, otherwise he too wasn't in on the joke. It may be a reaction against Twilight: in those films, everyone acts as if they had been drugged, so here, Burke can amp it up to his heart's content.

It didn't help that throughout Drive Angry I was trying to figure out where I had seen him before. If you are suppose to be this dangerous Satanist, shouldn't you be one that people wouldn't be laughing at? 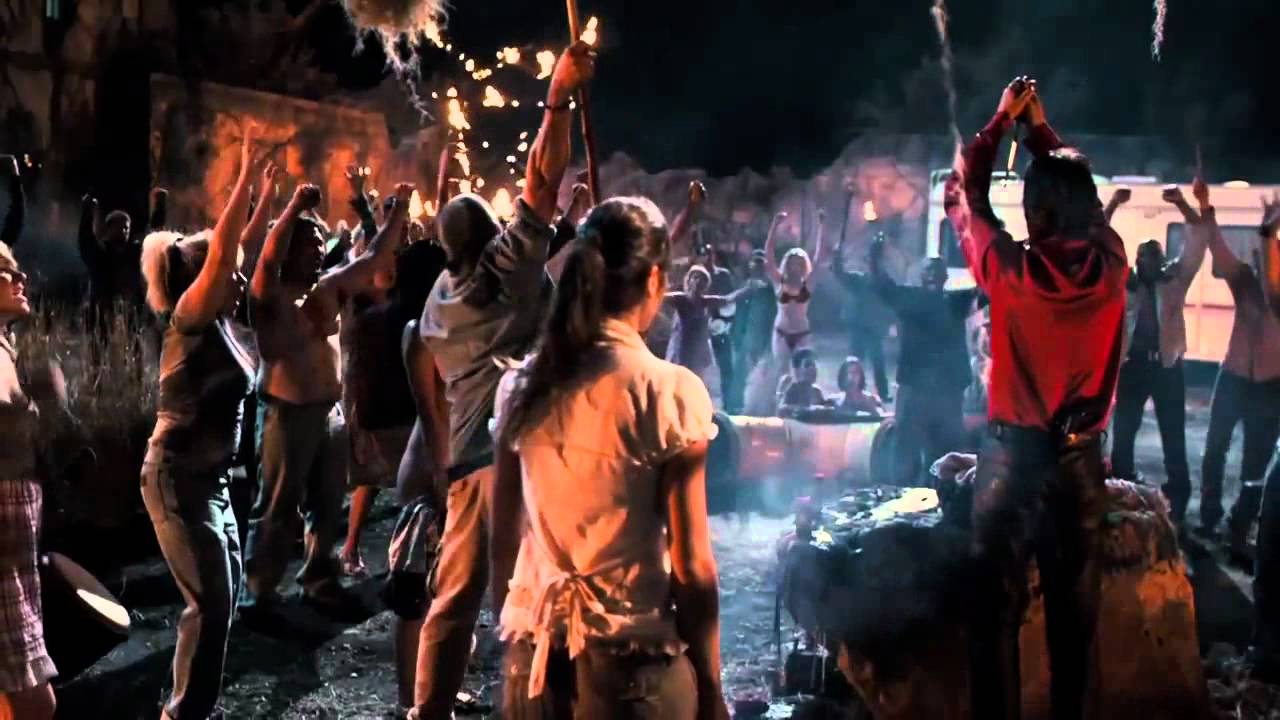 I have to give credit where credit is due: Fitchner's Accountant somehow managed to maintain the balance between menace and camp. He played it totally straight: deadly serious about his task to bring Milton back to Hell but oddly humorous when driving a big rig into a police blockade. The Accountant is just an entity doing his job with no other agenda, and it is Fitchner's rather blank expression that is a plus; admittedly, I also wondered while watching where else I had seen him and was temporarily confusing him with Mike Rowe from Dirty Jobs.

The strangest/worse performance was Morse. Again, he was unemotional, even slightly unperturbed, by the fact that his dead friend was standing before him. It was almost like this was rather ordinary, something that happens to everyone. Granted, I've never had anyone I helped bury come back to visit, but if I saw someone I knew to be dead asking for help with his car, I would not take it well.

Now, as to the 3-D effects, well, like in most 3-D films, it's obvious they are there not to enhance or further the plot. They are there to draw attention to themselves. Some, granted, looked appropriately gruesome (whenever something was thrown to be used to kill), but other times it just was bad (whenever The Accountant threw his coin, which never failed to bring back Two-Face to mind). If it hadn't been free the night I saw it, I doubt anyone would have gone.

If you are asked to pay to see it, don't drive angry. Just drive away as fast as you can.