From Prada to Nada: A Review

FROM PRADA TO NADA 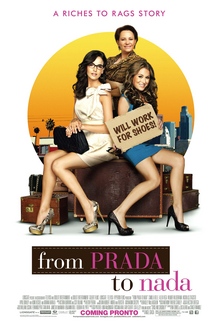 I start out by saying I've never read Sense & Sensibility or seen any film adaptation of Jane Austen's book. Therefore, I'm in no position to say whether or not From Prada To Nada stayed close to the source material. However, being someone who is of Mexican descent, I think I'm far better able to judge how close or far it comes to capturing the contemporary Mexican-American worldview.

My belief is that it is far easier to play on stereotypical images of Mexicans/Mexican-Americans than to possibly portray us/them as just Americans whose ancestors came from Mexico. It may give From Prada to Nada an ethnic flavor that a more WASP interpretation of Austen's work would have, and while it is good to see Hispanics on the screen perhaps the film itself could have stepped up to be more inclusive of the idea that there is an 'American' aspect to being Mexican-American.

We have two sisters, the Sensible Nora (Camilla Belle) and the Sensibility, although I would argue sensuous, Mary (Alexa Vega) Dominguez. In spite of being Mexican-American, they are remarkably rich. Nora works towards being a lawyer, while Mary is content to merely spend Daddy's money and marry rich. Alas, Daddy dies, leaving them broke and with the added pleasure of discovering at Daddy's funeral that they have an illegitimate half-brother (Pablo Cruz), along with his shrewish wife Olivia (April Bowlby). Because they are poor, they eventually have to leave their home in Beverly Hills, along with the swimming pool and movie stars, and crash at the home of Aunt (or as we would say, Tia) Aurelia (Adrianna Barraza) in that mysterious world known as East L.A.

They arrive to find a totally blue house as in color not depression and the local homeboy, Bruno (Wilder Valderrama). Now, the Dominguez Girls have to adjust to being poor and horror of horrors, ethnic. Nora, still working to doing something productive for society, finds herself in the same law firm where Olivia's nicer brother, Edward (Nicholas D'Agosto) works, while Mary, still in college (though one wonders why, let alone how, she got in and continues to go), falls for the Student Aide, Rodrigo (Kuno Becker, don't let the name fool you; he is Mexican). One actually doesn't have to have read Sense & Sensibility to know where the story is going or who is going to end up with whom. From Prada to Nada isn't going for originality, not even when taking a novel with a very British worldview and adding a heaping helping of salsa. It is pretty obvious where the story is going (girls learn about true love and ethnic pride), but some things in the actual movie don't make any sense.

From Prada to Nada wants us to know how important family is to the Hispanic community. At one point, when Mary appears reluctant to invite Rodrigo to the family's 16 de Septiembre celebration, her Tia chastises her, pointing out how important family was to their father.

A more troubling aspect is the fact that writers Fina Torres, Luis Alfaro, and Craig Fernandez (I'm going to guess they are all Hispanic) rely so much on stereotypes to signal the 'contemporary' Mexican-American world. At one point Edward comes calling to Tia Aurelia's home for Nora, and Tia sees a young man in a suit and automatically assumes 'Immigration'. Therefore, all the women working at the sewing machines in the living room quickly rearrange the furniture to watch a soccer match.

As much as I support seeing Hispanics behind the camera, I'm going to take the three writers to task. Old Mexican women, at least the ones I know based on my mother, her sisters, and her friends, would never watch a soccer game or care to. Now, a telenovela (a Spanish-language soap opera)...that's another matter. Heaven Help the Man who dares interrupt a novela for any reason, and I mean ANY.

Another strange moment is when the whole neighborhood comes to Tia Aurelia's home to celebrate Mexican Independence Day (September 16). I wondered if it would have been better to have celebrated Cinco De Mayo (May 5), since this day which commemorates the Mexican victory of the invading French army at the Battle of Puebla has been confiscated by Mexican-Americans in the same way St. Patrick's Day denotes Irish-American pride, and both are excuses for drunkenness regardless of ethnicity. I personally don't know any Mexican-Americans who celebrate 16 de Septiembre, and I especially don't know any who dress up in traditional Mexican garb unless they are part of a show. It might have been to show just how ethnic Mexicans can be, but it all looked a little to cute for its own good.

It just seems that the writers and director Angel Gracia, whom I'm again guessing is Hispanic, weren't at all or perhaps in a limited way interested in showing us a side to Mexican-Americans that didn't rely on excessive devotion to saints or living in the barrio in a garishly painted house. If I had been Mary, I would have said I'm more ashamed to live in a house that would have made Frida Kahlo burst into laughter than in my relations.

Maybe I have the wrong reading on From Prada to Nada: maybe they made this film to appeal only to Hispanics, specifically Mexican-Americans, and if that's the case it did a decent job in pointing out all the oddball quirks of the community: excessively long names, a virtual requirement to know Spanish, having faith healing work its wonders. If you can't laugh at yourself, the film perhaps is saying, then who can you laugh at? 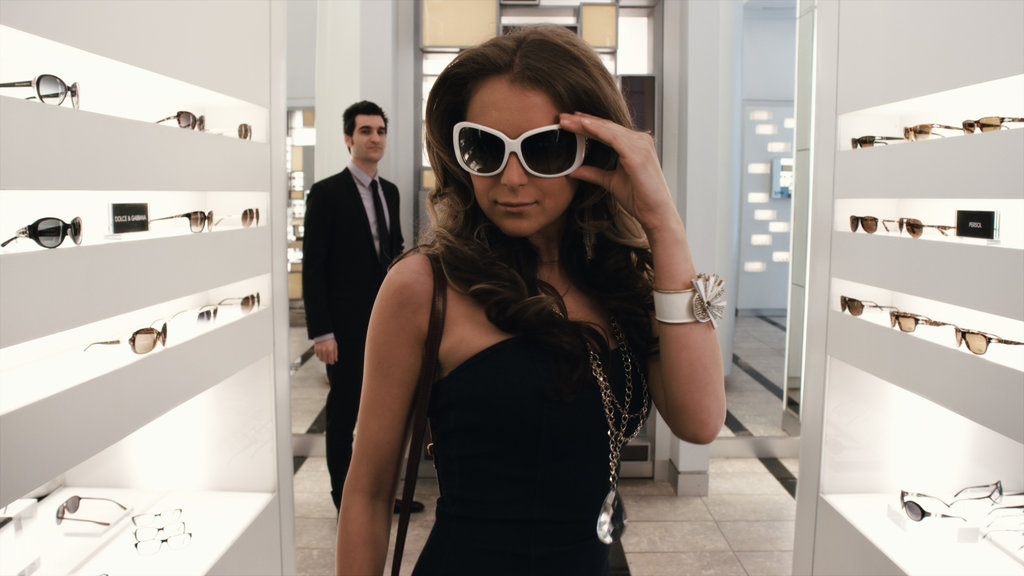 All that I could, albeit reluctantly, give a pass to. It is in some of the performances and plot that I wondered if From Prada to Nada was even trying. Pablo Cruz's Gabriel Dominguez, Jr. is perhaps the worst. In the few short scenes he was in, he rarely did or said anything. In short, he may be the most milquetoast Mexican in the history of film. He was just there, just a plot device to get the girls out of their house and into Kahlolandia. Whatever trauma he may have had about being a bastard is unexplored, as is whatever relationship he may have wanted with his sisters. That is because he appears so bullied by Olivia that he barely says a whisper or at least I don't remember him saying much. Bowlby's Olivia has no real reason to be so hostile to the legitimate branch of the Dominguez family other than it was needed to get the girls out of the house.

Both Vega and Belle did a good job playing the self-absorbed and self-assured Mary & Nora respectively. Both gave good performances where you could see their characters changing to embrace the situations they found themselves in although one wonders how two girls whose Spanish appears so weak could pick it up so fast. Their love interests (D'Agosto, Becker, and Valderrama) also were all right, bringing an almost innocent charm, smooth moves, and gruff likability respectively.

If it weren't for the predictability of the film itself, From Prada to Nada could have been much better. As it stands, it is mildly amusing but perhaps only to those who might get the 'inside jokes'. I hope that Hispanic filmmakers will one day realize that there are outposts of Hispanics that are beyond East Los Angeles, that some Hispanics are actually members of the middle class, and that not every Hispanic is a Catholic. Here's where I'm going to editorialize just a touch:

I don't have tattoos, I was never in a gang or knew anyone who was in a gang, unless you count my brief time in the GOP as gang affiliation, but that's up to you, I do speak Spanish but it is my second language, my first is still English, I don't celebrate Mexican holidays or dress up in colorful costumes, respect Catholics but don't have any saints in my home: Protestants aren't all that big on candles of the Pope, and my home is a nice, one-story brick structure. In short, while I can appreciate the ethnic humor within From Prada to Nada, I can't say it comes from personal experience.

No, From Prada to Nada isn't a bad film. It just isn't original, either in plot or how it tells it. I can't be too harsh with it since from what I saw it wasn't going for a broader market or a broader mindset about Mexican-Americans, so I will give them credit for making an effort.

Hopefully, we can get to a point where Hispanics aren't portrayed even by other Hispanics as poor, unable to speak or understand much if any English, and/or fearful of immigration or police officials (except in Arizona). It could have been better, but that's the way the enchilada crumbles.